Cherry season is here at last – one of the reasons I moved to France!!! But ‘une catastrophe’ – April was so warm, that it’s hardly a season at all. But there were enough to carry on with the annual cherry festival in the village of Trausse-Minervois. And here’s a short video clip I made with my camera – most of these festivals seem to have either their own or a visiting ‘oompa’ band, and this one is very enthusiastic, if a little out of tune …

And another France-related video clip can be seen here - this one certainly not of my making – but fun!

I’ve just had a quick and unexpected trip to Spain today. Bizarre in my way of thinking, to be able to nip over to another country at the drop of a hat. Miki, a friend from the village, rang this morning – he was heading down to do a bit of shopping just over the border, and did I want to go down for the ride? Well, yes, of course I did – any excuse not to pick up the paint brush, which was today’s plan. Some things are much cheaper there - I now have more olives than I know what to do with, and a well-stocked alcohol cupboard that I do know what to do with.
Just on the border, we passed through the town of Le Perthus – the border goes down the middle of the main street. Signs on the shop fronts on the left are in Spanish – those on the right in French! And then on to La Jonquera, not a particularly pretty town but full of big shops, garden centres and terracotta and ceramic planters.

Last week I had Phil and Val with me, unfortunately only for three days, but in that short time they have fallen in love with the area! So much so that they’re coming back later in the year, and may even have a look at what’s on offer re the property market – how exciting!

And they happened to be here on a Tuesday and came on the walk with the group – it was all around an etang down the coast near Bages and Peyriac-de-Mer. And a great day was had by all – they were made to feel so welcome by the local folk and there were lots of laughs, eau de vie, other home made liqueurs and more cakes passed around after the picnic lunch than you could poke a stick at! We were even made to take some home for dinner.

Here they are the next day, dipping their toes in the Mediterranean on the big long beach between Sete and Agde.

We had a seafood lunch at a restaurant in Meze, and not only did they share a lovely bouillabaisse – 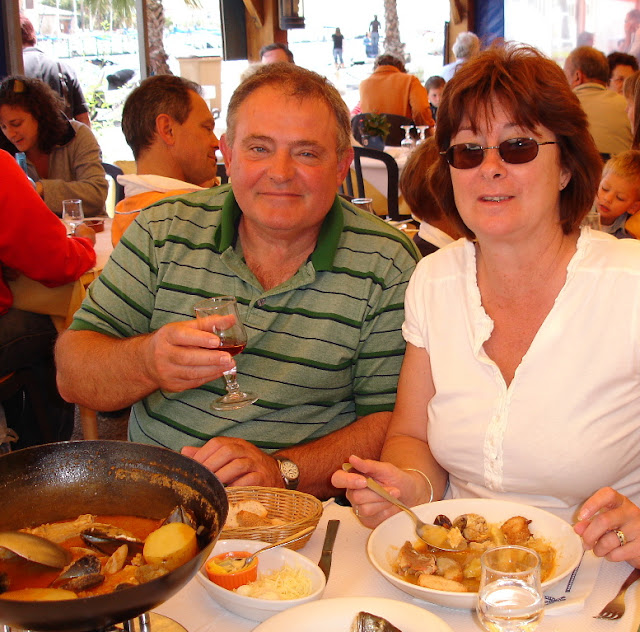 but Val ate her first EVER oysters …..! 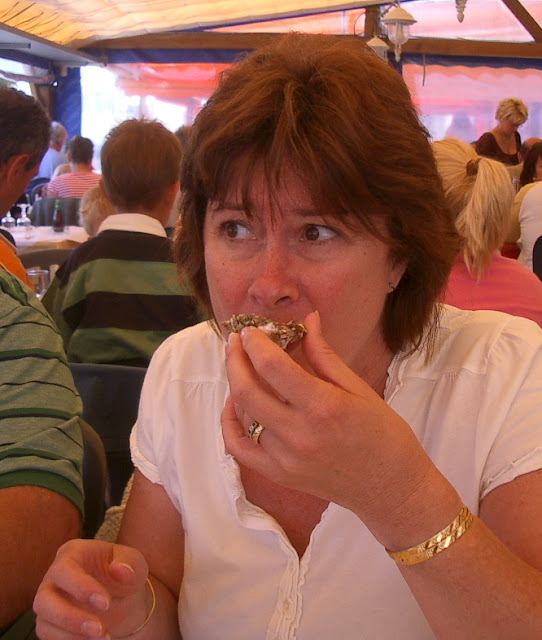 and the worried look was all for nothing – she’s now a convert, and we bought some more that day to take home for the evening.
at June 05, 2007