And yes, another 'foodie' article - but this one was a little different. Nic, Duff and I went with friends Bonnie and Terry to an aligot evening in Agel.

Agel is a pretty village about 6 kilometres from here, and this is where Terry and Bonnie live - and they kindly arranged tickets for us for the evening. It's held every year in this village and tickets are sought after!

Aligot is basically a mixture of mashed potatoes and cheese, mixed until it's very elastic. On the evening, it was definitely made in bulk, by a specialist who took great pride in his work and was rewarded by lots of applause as he demonstrated its 'stretchability' - the sign of a successful aligot! 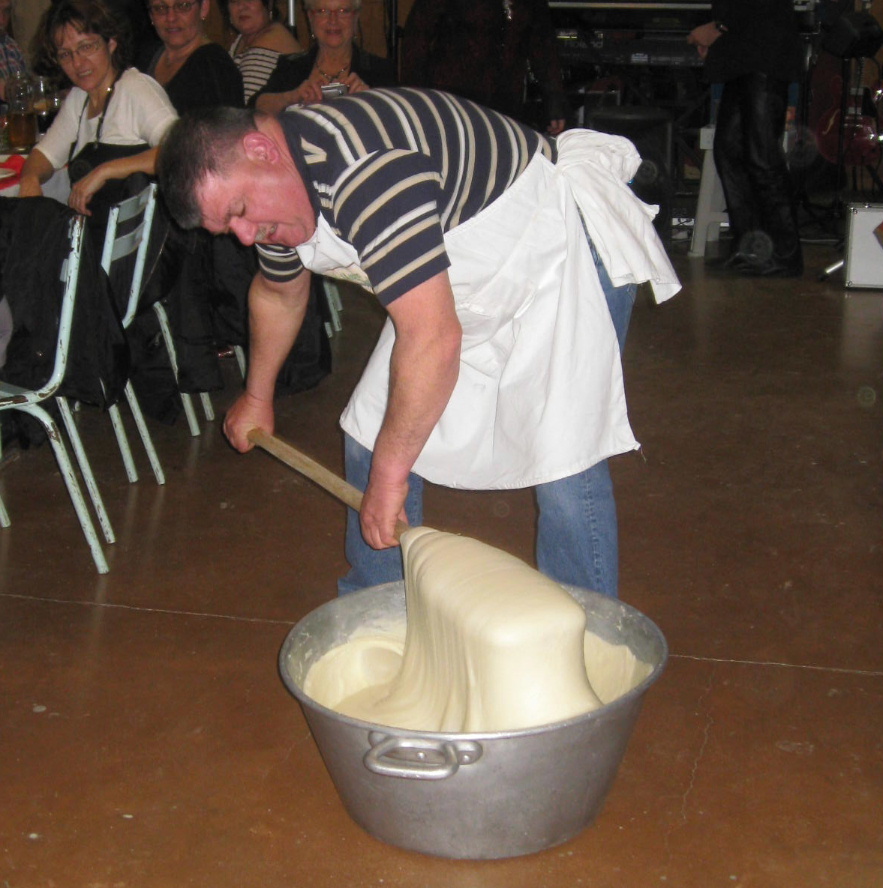 Now, we did not eat aligot alone. Oh no, this was a feast of local fare indeed. It was accompanied by Confit de Canard - and served by the man who raised and prepared the ducks himself.

Served at the table from rather large containers! 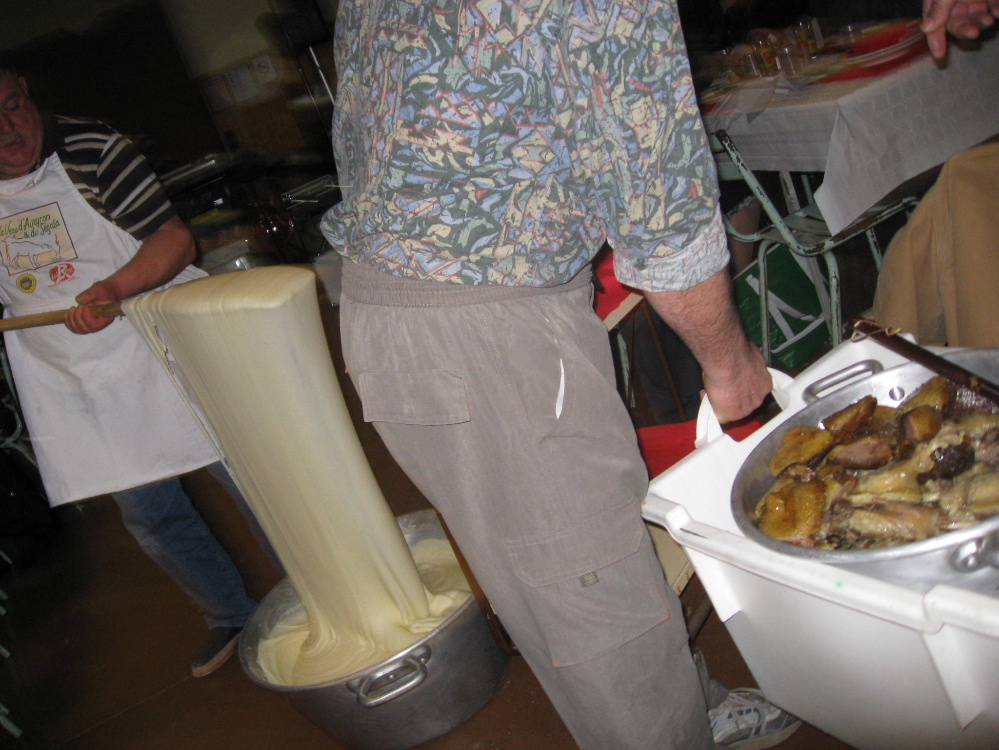 Need I say ' delicious' - also I must say - mercy! they forewent the cheese course. 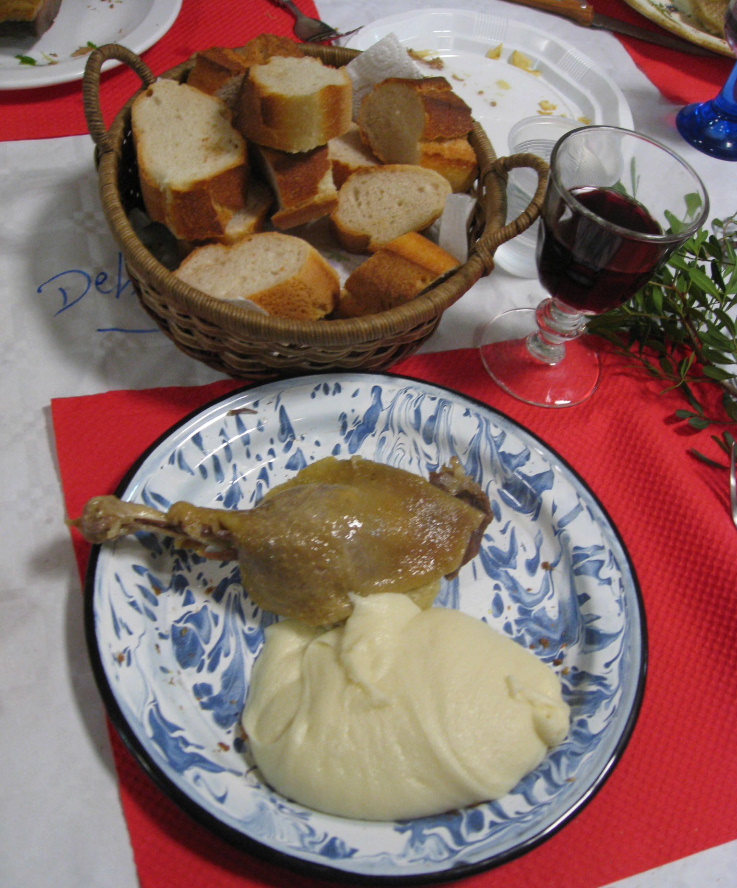 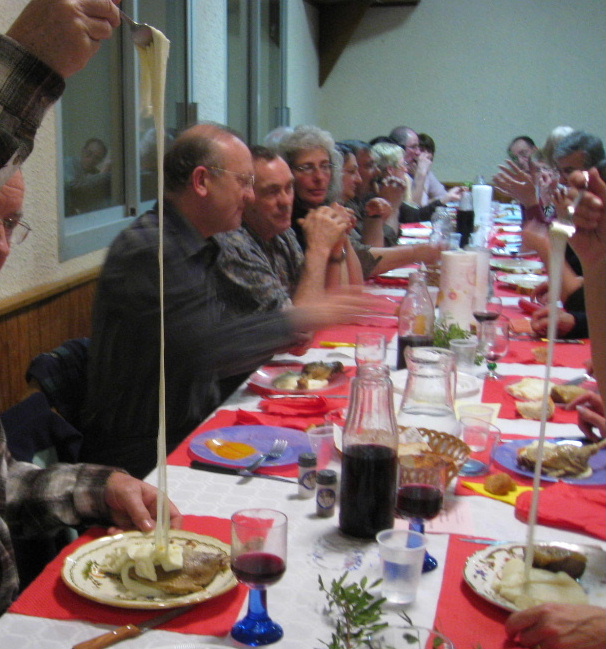 An instance where it's perfectly
acceptable to play with your food....

It makes me laugh looking back on these photos - I cannot imagine anything like this in Australia - the food police (Health & Safety) would have a field day. Here it's par for the course to have food served like this at village functions.

Between courses there was dancing - a pause between courses is definitely required. And towards the end of the evening, something that I've seen at several other events - is where people sit on the floor and 'row' and then pass a willing participant (in this case an elegant - and perhaps not so willing - woman) backwards over their heads.

However, both Duff and Terry were most definitely willing! 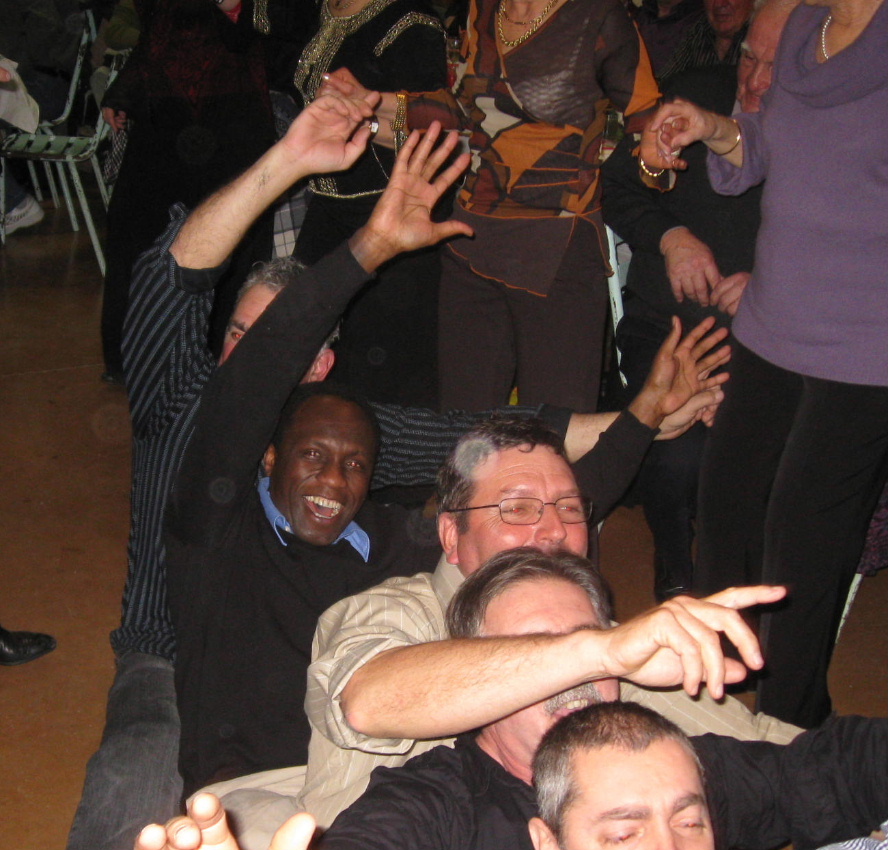 There was [groan.....] yet another function in Bize a few weeks ago. And this one was for a very worthy cause indeed.

On Christmas eve, the village bakery suffered a bad fire. The bread ovens were destroyed and most of the building and upstairs living accommodation of the building was uninhabitable.

So not only was it a disaster for the baker and his young family, but also for the village, having to have bread brought in from another village (quelle horreur!). The repairs are only now being carried out.
So, there was a fundraising lunch, together with raffles - to help the family. Nearly 6000 Euros was raised and the turnout on the day was phenomenal. I've never seen the village hall packed so tight with tables. And all for only 15 euros a head - I think people would happily have paid more.

However it was a great result for the baker - who was so overcome he couldn't speak and his wife had to say a few words. What a lovely village this is - I'm sure the other villages have much the same community spirit - but this is the one I live in and I love it.

And to get away from the food theme - the recent strikes in France.
Thurday 19th was a national strike day here. Sarkozy's popularity seems to be on a definite slide downwards.
And the strike ...? To quote an article on the internet:
And inadvertently, I found myself in the midst of it. I had an appointment in Carcassonne at 4pm on Thursday, and had forgotten completely that it was the day of the strikes. I ended up in downtown Carcassonne well and truly caught up in the parade. I nearly made it through before a gendarme put his hand up to stop traffic.

Hence, I was the first car in a very long line of traffic - and had the front view of the entire parade.
And there were thousands. It took over half an hour for it to pass by, and I ended up being 45 minutes late for my appointment.


This will be my last post in France for a couple of months. I am heading back to Australia in a few days as I have a few things to attend to there. Well, one thing really - I'm selling my house there, for various reasons. And it's had tenants in it for some time, it's become rather run down and the garden is in bad shape.

The truth is that I'd much rather be here right now - the weather is warming up and things are starting to green up and look beautiful around the countryside - my garden here is happening too. And I'm happy here at the moment. I loved being back in Australia in the new year and catching up with family and friends but right now, it's here that I want to be. And of course it's not to say that it won't be nice to be back in Oz again - I have a wedding to attend on my arrival that I'm looking forward to.

But basically, while I'm there I will move back into the house, paint all the interior walls and ceilings and do whatever DIY I can and get the garden back into some sort of shape. I suspect it will be mainly pruning and tidying as it's autumn there now and not the best time to be putting in new plants. Thank goodness it's not the height of summer!

And finally, the English lessons are still going well - in my absence, Nic is taking over. The 'students' are really keen and it's good to keep the momentum going. I'm still thoroughly enjoying it too - and so are they. Last week I was presented with a lovely bunch of mimosa - gorgeous. 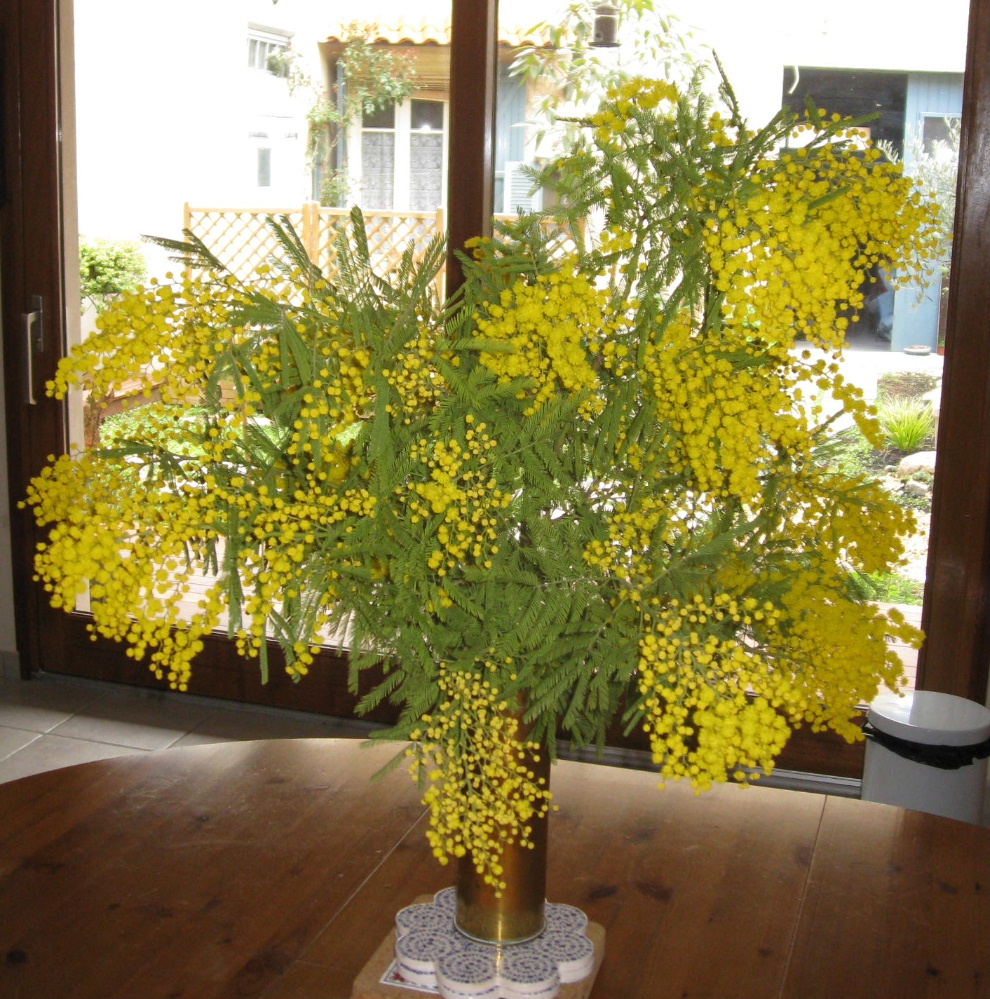 The meal looks quite tasty!

I stumbled across your blog pretty randomly, and I was wondering what village you live in? I spend a lot of time in the Languedoc area.