A Tale of Two Gardens

Well, there’s not too much news from my little garden – except that I have picked my entire crop of kumquats! I had really only ever intended for it be decorative. And it certainly is that.

But there were so many of them I felt I should try to do something with them. So I’ve preserved them but have yet to taste them. If nothing else, they look delicious! 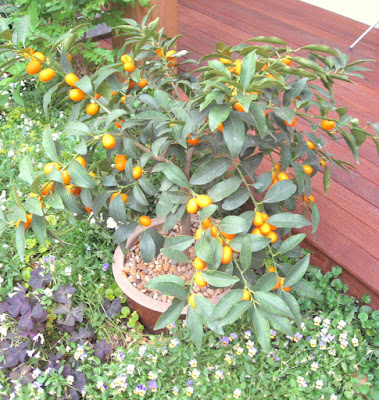 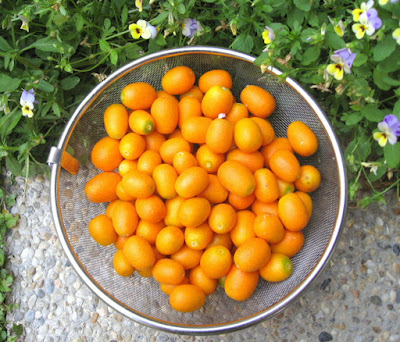 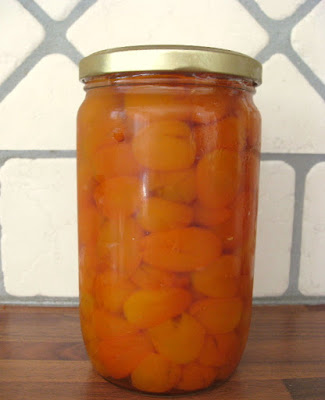 However, there’s much more to say about Nic and Duff’s garden!
They’ve been very fortunate in that they’ve kindly been offered the use of some space by a fellow-gardener in the village - in a large garden plot (potager) down near the river.

They did most of the hard work of getting the garden planted up and running while I was in Australia – my only involvement to date has been helping put up the trellises for the tomatoes, the odd bit of watering, and of course admiring and sampling the fruits (vegetables?) of their labour. 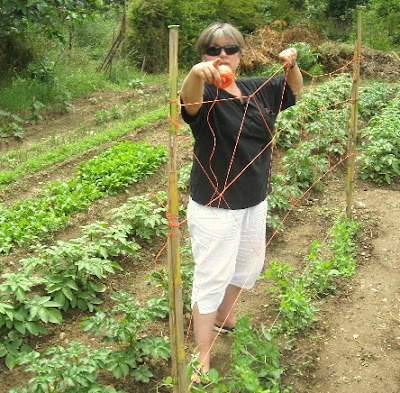 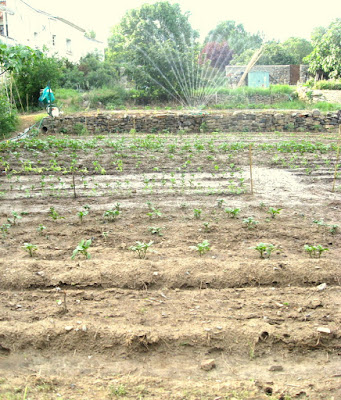 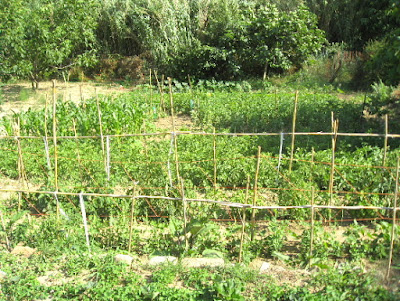 A few weeks later - looking the other way.

The bamboo stakes come from down at the edge of the river – it does the trick and doesn’t cost a cent.
They’ve been busy putting in loads of vegetables – potatoes, tomatoes, carrots, aubergine, green peppers, onions, garlic, basil, chillies, peas (a little late but they’re doing ok), beans, broad beans, strawberries, corn, courgettes, lettuces, gooseberries, radishes (instant veg – hot as hell – too many!), kale. 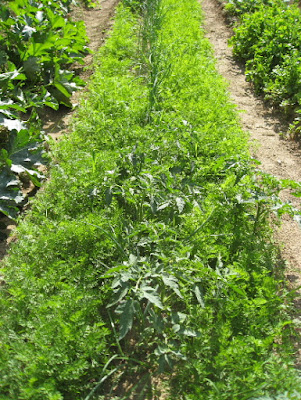 And then there’s the pumpkins – none other than Queensland Blues – I brought back a couple of packets of seeds with me from Australia. Yum. 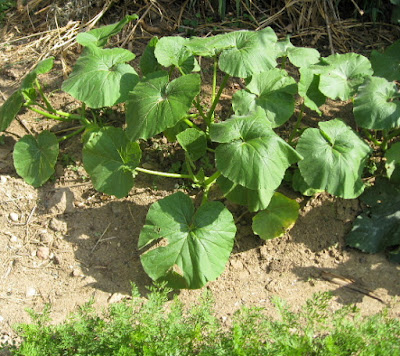 And the bottle on the metal stick? Well, it’s supposed to rattle in the wind and scare away the MOLES! There were little raised mounds of earth meandering over a good part of the garden last week – they’d been busy overnight.

There’s now no sign of them - they don’t appear to have dug any more tunnels, so perhaps the bottle-on-a-stick is working? 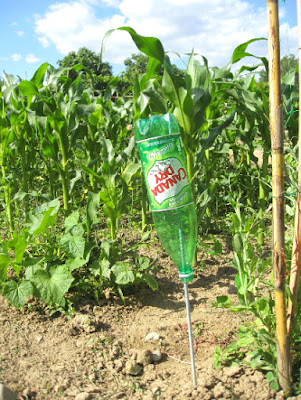 The courgettes are growing like mad, and the inevitable glut is nearly upon us. And the funny thing is that none of us actually like them very much, having tried various ways to deal with them in the past.
However, I have one recipe that I often use – it’s very quick and simple, delicious, and looks great served on the plate. In fact, it’s SO delicious that I’m going to copy it here.
Cod in Prosciutto with Courgettes
2 fresh cod fillets (or other white fish), around 180g each
Sea salt and freshly ground black pepper
2 wide or 4 thin slices Prosciutto
1 tbsp olive oil
A few fresh flat parsley leaves
For the courgettes:
2 courgettes, washed
1 tsp butter
1 tbsp extra virgin olive oil
1 tbsp lemon juice
Half tsp fennel or caraway seeds


Method
1. Trim the fillets of cod into neat squares or rectangles, and season well.
2. Wrap them neatly in the Prosciutto.
3. Heat the olive oil in a non stick frying pan, and cook the fish presentation-side down first, until the Prosciutto is crisp. Turn once and cook until the fish is cooked through - about 3 or 4 minutes depending on the thickness of your fillet.
4. Coarsely grate the unpeeled courgettes. Heat the olive oil and butter in a second non stick frying pan, and toss the grated courgettes very quickly in the hot pan, adding lemon juice, fennel seeds, sea salt and pepper.
5. Arrange the courgettes on two warmed dinner plates, and top with the pan-fried cod and the parsley leaves.
Down near the vegetable gardens, there are a few empty fields. A few weeks ago there was a new-born donkey – I didn’t get a photo, and now it’s no longer there.

However, there’s now a new-born foal – cute as a button and so tiny. Its mother doesn’t look like a Shetland pony but she sure is small – and so is the little filly – and they’re both very comfortable with people.


And as can be seen from these videos I’ve put up today – I’ve finally decided to fiddle with a video editing programme to try to get rid of the dreadful background noise on some of my previous efforts – mainly the noise of the wind on some of the outdoor clips.
I think perhaps I should have stopped at the ‘muting’ stage – but oh no, I pressed on and have put some background music to them.
Still a way to go, methinks.
at June 20, 2009