Sunday in Limoux for one of the many days of the Fécos, the weather was amazingly fine and sunny.

And yesterday in Bize we were snowed in! Not just Bize – most of the south of France. Very strange indeed for this time of year. It was mentioned on the official weather site that a snowfall like this, this late in the year, has not occurred since 1964.

So, a pictorial record of both events ….

I planted a whole lot of plants on the weekend, thinking spring had arrived - now I must wait to see
if they'll survive after the thaw! 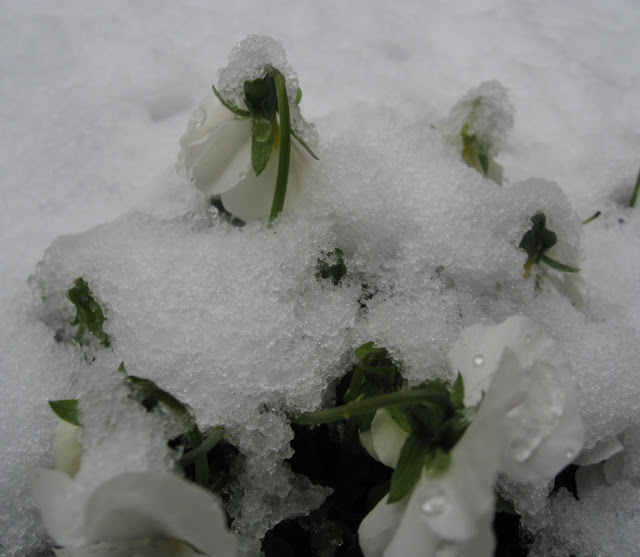 Olive tree, looking decidedly unhappy under its weight of snow 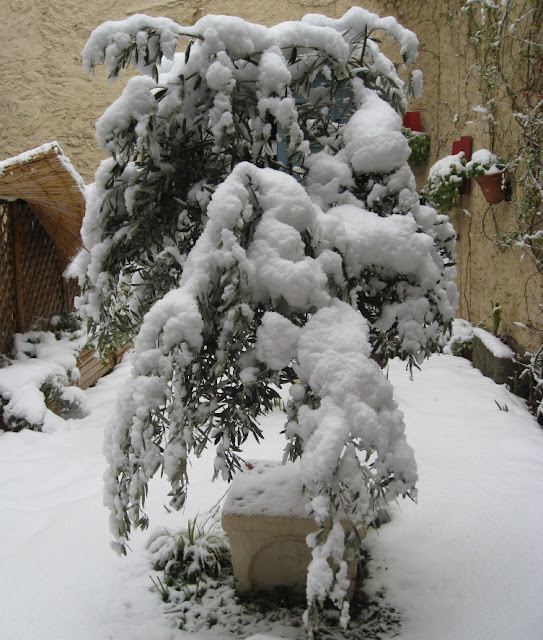 ..... and the wattle (mimosa) looking even unhappier,
more resembling those 'leaning trees of Geraldton'.
The day before, it was vertical and covered in blossom! 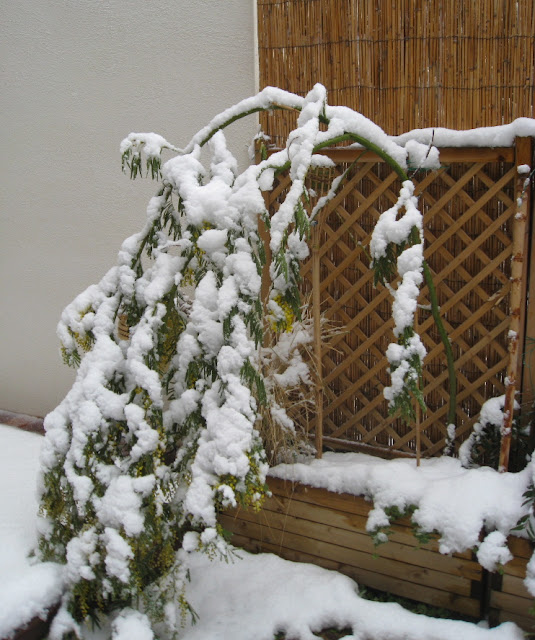 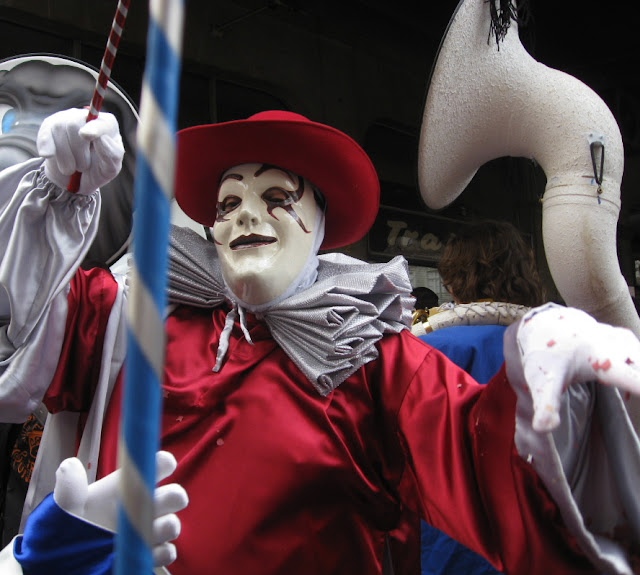 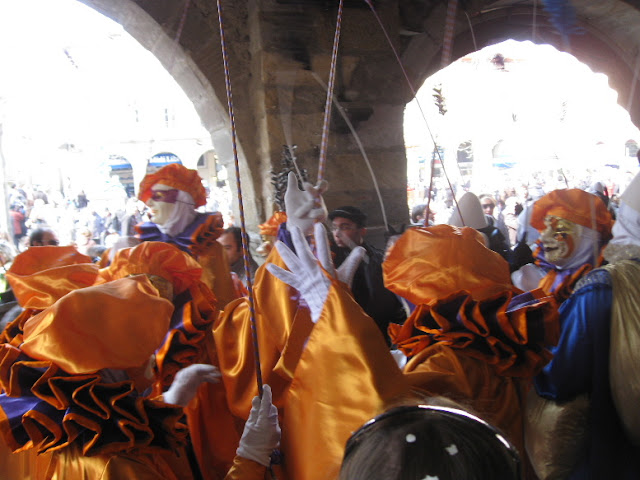 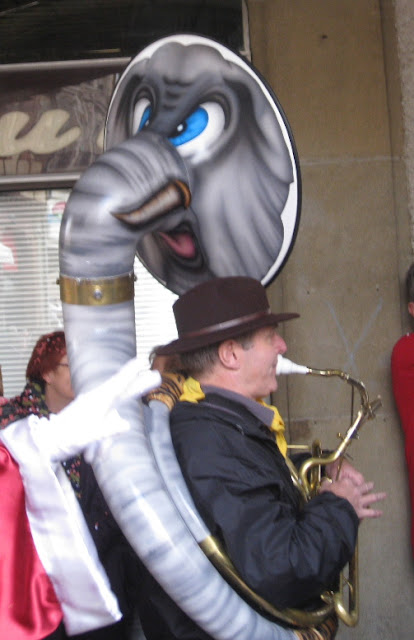 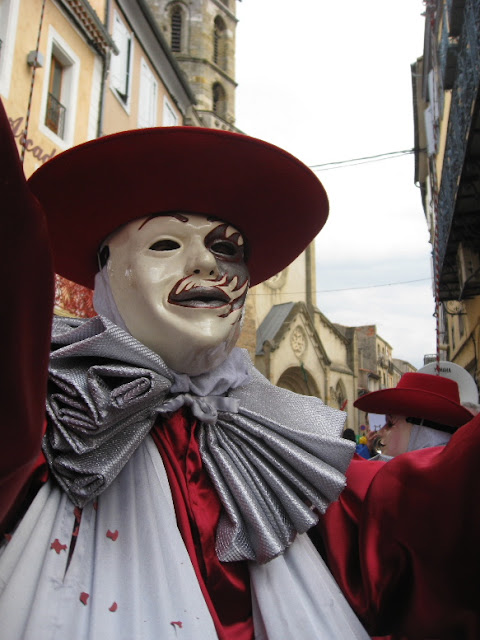 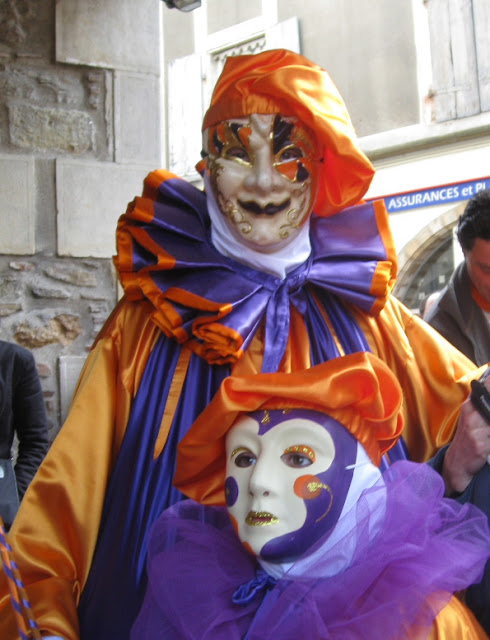 No-one / nothing goes home without a covering of confetti ...... 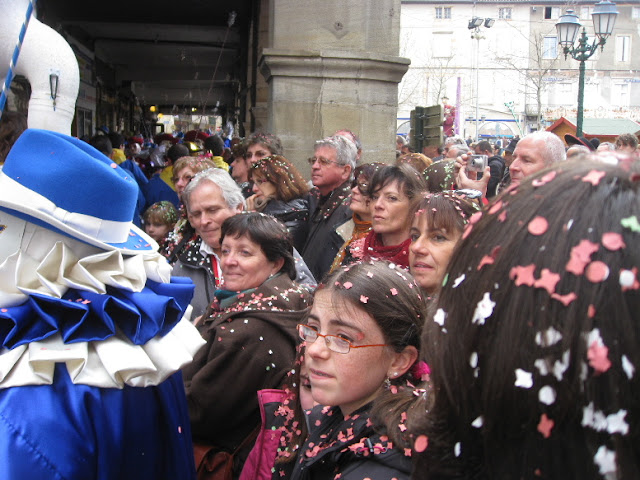 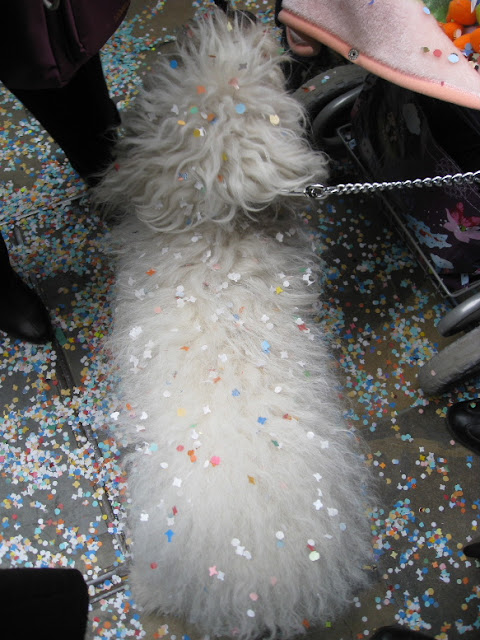 A very good article is reproduced below. It’s from The Aude Flyer, and gives a good description of the origins and history of the Limoux Carnival.

The Limoux Carnival is not a manufactured event meant as entertainment for tourists. It is deeply traditional and taken very seriously by the people of the town, masked players and spectators alike.

The tradition of the Carnaval de Limoux has been handed down from generation to generation and is now part of the heritage of the town and has the distinction of being the longest carnival in the world.

It takes place each winter from January until Easter and is conducted in Occitan, the traditional language of the area. It is highly individual and great fun to attend.

Be prepared to let your hair down and be covered in confetti and you won't be disappointed.

No one can say exactly when the carnival started in Limoux. Some historians say that it was originally a pagan winter festival.

Others say that the festival started in the 14th century when the monks of the monastery of Prouille awarded the millers a day of remission of their taxes, and so to celebrate they ran through the streets of the town (accompanied by the town fiddlers), throwing flour over everyone.

The flour has been replaced by showers of confetti in the modern Carnival.

The earliest written record of the event seems to be a regulation of 1604. At some stage in its 400 year history it has been partially merged with the Christian Lent festival, and with European pierrot traditions.

Women have been allowed to participate since 1972!

In Occitan the Carnival is referred to as Fècos after the characteristic dance of the festival. The Fècos takes place in the place de la Republique, a wide square with ancient tall timber framed buildings with stone arcades on all sides.

The masked dancers (looking like scary characters from Dr Who) process around the square under the arcades from one bar to another accompanied by local musicians.

Uniquely the Limoux Carnival requires revelers and spectators to participate equally to the event. The spectators become the partners of the revelers, as they are exchanging jokes and gossip in the Occitan language.

The Carnival takes place on ten consecutive Saturdays and Sundays culminating in a ceremonial bonfire.

There are some twenty or so local groups referred to as "les bandes" who take it in turns at 11 in the morning, 4.30 in the afternoon and 10 o'clock in the evening to perform their ritual dance in the main square.

The people in a particular bande may be members of a town guild, a local business or maybe just live in a particular part of Limoux. Gaining entry to a bande is quite difficult and the decision of the bande to accept a new member has to be a unanimous decision.

The Carnival starts with a parade of the members of the organising committee dressed up in comic masks, white baggy shirts and trousers, wearing red scarves and clogs, and carrying whips. These Meuniers (Millars) receive His Majesty, the King of the Carnival, "Sa Majesté Carnaval" a dummy stuffed with straw, who will preside over the proceedings.

The performances "les sorties" begin with three members of the bande leading their particular group in a procession to one of the five cafes in the square. Here, in front of the chosen café, they dance a waltz. Accompanying them is a group of musicians on drums, trombones, clarinets and trumpets.

The sound they make is reminiscent of the French bands at the Rugby World Cup matches.

Following behind the bande are a group of performers called "goudils". Goudils are men, women and children, fans you could say, connected possibly in some way to the bandes; but not necessarily. In fact, anyone can dress up and follow the music, and the more ridiculous the disguise the better.

The popularity of the bande may be judged by how many goudils it has. This strange collection of disguised performers processes around the square in time to the music, stopping in turn at each of the cafés to drink wine and make good natured fun of the customers.

The first sortie is at 11 o'clock in the morning and the comments and characters have a political theme and it is the purpose of the carnival to ridicule society and its rules.

The subject is chosen by the bande that is responsible for "starting the music" on that particular day. The goudils of the bande are the featured performers at the morning sortie; they are rowdy and risqué carrying banners and often wearing plastic bosoms and bottoms!

The whole demeanor of the 4.30 afternoon performances is a little more mellow. No mention of politics and the music is slower. The bande's Pierrots arrive wearing white masks, waving their long wands known as "carabenas" and showering unsuspecting passers-by with confetti.

The men and women are dressed identically in spectacular clown outfits with enormous ruffs, their faces and hands are covered to avoid recognition when they are winding up the spectators with personal comments and innuendos.

At 10 o'clock in the evening the Pierrots come back to the square. The medieval setting of the square is made to look quite mysterious by the appearance of torch carriers to light the way of the procession.

After ten weeks of festivities, the Carnival king is brought to trial as the scapegoat who must take the blame for all the 'sins' committed during carnival and although he is rigorously defended, he is inevitably found guilty and burnt at the stake in a huge fire in the square.

All the Carnival participants are present and mourn their king and throw their long wands on to the fire closing the Carnival until next year!
at March 08, 2010