This year’s vendange is well underway in the region – harvesters and slow-moving tractors with their full trailers, out on the roads and through the villages, leaving a trail of juice behind them. 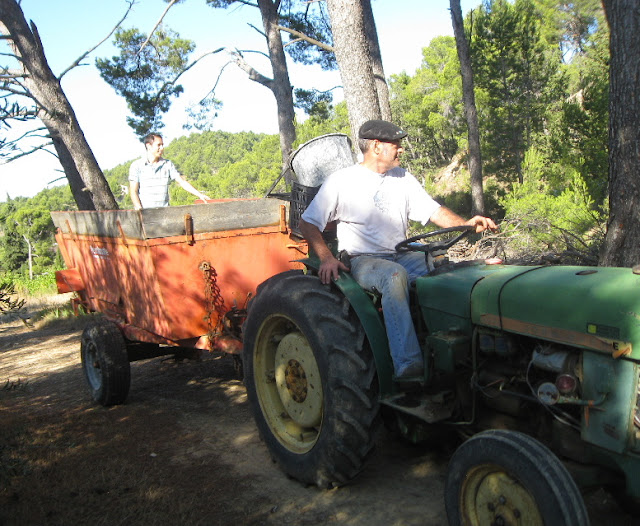 Although a lot of the mechanical grape harvesting is done in the cool of the night – apparently the grapes are said to be better picked when cool, so that the fermentation process doesn’t start until the grapes are at the winery.

And as last year, a group of us helped Olivier bring in his crop in the three small parcels of vines up behind Bize. Not quite all the usual suspects, but some of the same crew were here again this year.

And I'd be lying if I said it was hard work. A bit warm and uncomfortable, and the novelty wears off after an hour or so, but after all, it's only a morning.

I am full of admiration for those folk that do this for the whole of the season, day in, day out. In our case, fairly easy and lots of fun and banter. 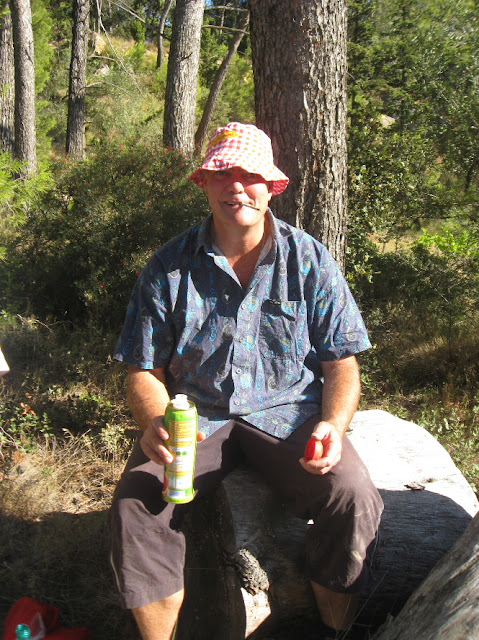 Miki wearing his "Well, they were giving them away
free at this year's Tour de France" hat ......

The only downside was the millions of prickles that scratch and get into your socks – they’re a nightmare to get out. In fact, my shoes are still out on the verandah waiting for me to pick them all out, but the socks were beyond that. They went in the bin. In fact I’ve taken a photo of the little buggers here …. 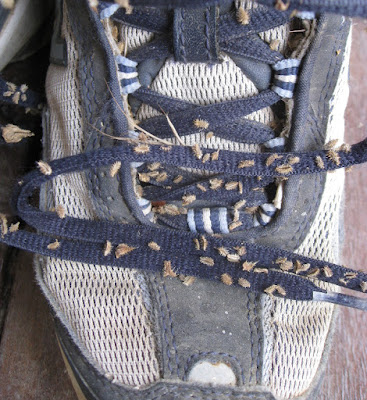 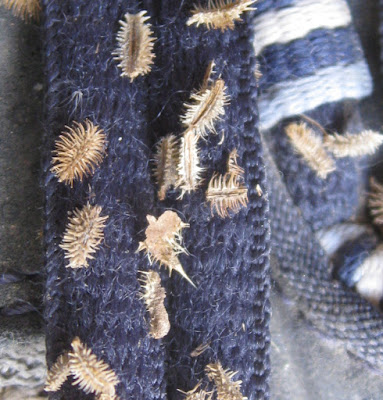 The vineyards are full of them, especially these ones because all these vines are organic so nothing is sprayed and all the weeds get to stay. Lucky weeds/vines/insects – not so good for us. In fact, my only 'injuries' for the day were sunburned and scratched ankles.

Mind you, these particular prickles aren't as bad as last year when Nic and the kids and I were out riding and between us, we got five punctures in one day. Another type of prickle - one that has no trouble going through a bike tyre. A bit like the double-gees we get in Australia.

After the grapes were in, again Olivier rewarded us with a divine lunch under the trees at the end of it all. And what a reward – tasting all the better because we were starving by this time! The little 'pick-me-up' of red wine or rosé during the mid-morning break was much appreciated, but probably only whetted our appetites.

For aperitifs, there were plastic cups of escargot de mer (what I know as periwinkles). Now, I'd like to be able to report first-hand, but I can't - however the consensus was that they were pretty damned good. 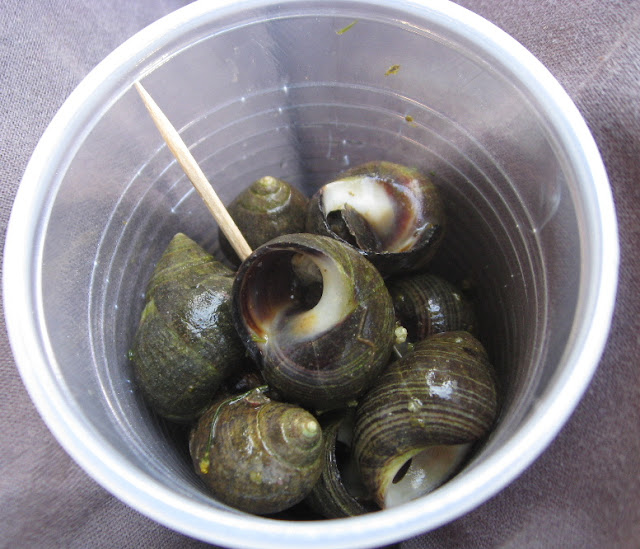 Salads, cold meats and sausage, followed by the chickens, rotisseried on a spit over a fire of old vines. And in the video at the end and photos below, the iron implement is a home-made baster.

There’s a small hole in the bottom of the ‘bowl’ at the end, it’s heated in the coals and then pieces of pig fat are put in there. This then of course melts and can be drizzled over the chickens. 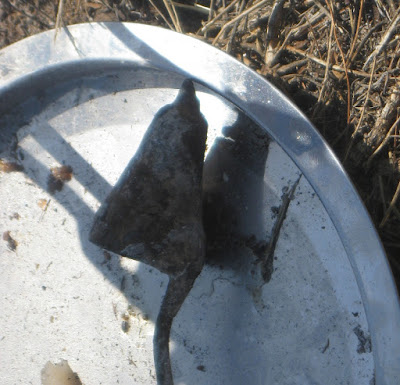 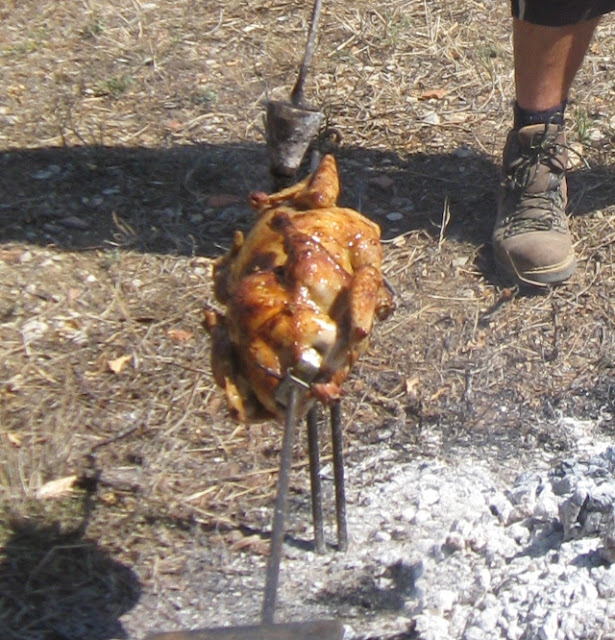 The kids that were there got into the swing of things after the meal – they decided they’d present us with a dessert. And this is what they came up with, from all the things growing at the edge of the vines. 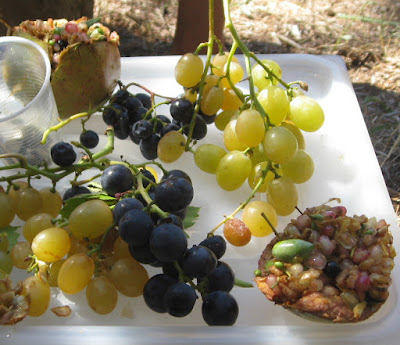 A pomegranate, hollowed out and mixed with the seeds and olives of various sizes, and decorated with olive leaves! It looked surprisingly pretty and appetising, but definitely wasn’t for eating! 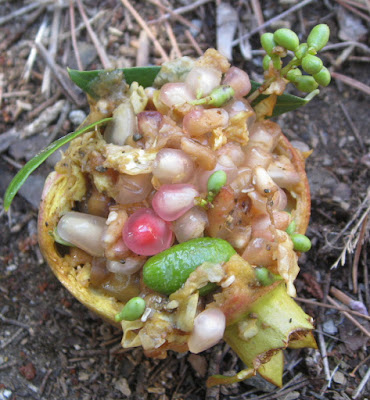 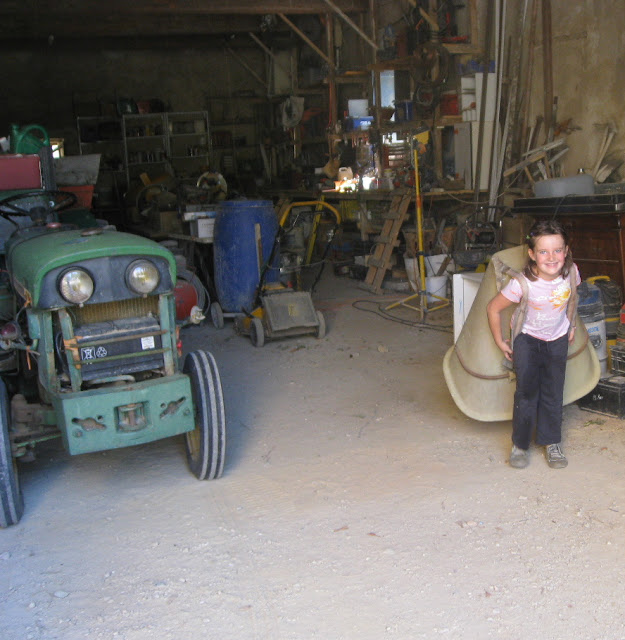 And here's the tractor with the grapes, backed into a cavenous
cool barn while we have lunch - and one of the
kids dwarfed by the [upside-down] grape basket.
So, once again, a great day. But things got even got better.

Olivier was talking wine (what else) with avid wine buffs Doug and Linda and offered to share one of his very nice bottles of wine with them. And I was invited to share it too. Olivier provided the special bottle of wine and I provided the venue.

So the following night, this is what we were treated to – a bottle of beautiful red wine (1983 vintage!) from Bordeaux and I feel very privileged to have been able to share in this. A fitting and lovely end to this year's vendange ......  roll on the next one! 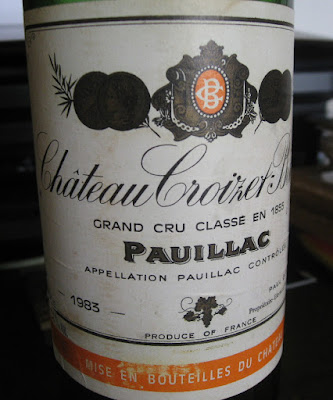 Videoclip of the day: