Summer – Nic’s kids on the school summer break – cheap Ryanair flights out of Carcassonne. Portugal: 3 day break. Sounded good to us, so that’s where we’ve just been.

The trip didn’t start without drama though. Just before we were heading to the check-in desk at the airport, I got a blood nose that wouldn’t stop. I’ve only had about three in my life, that last one about 25 years ago! Talk about bad timing …. Another traveller suggested I might need to see some first aid people if I was going to get on the plane – and she offered to go and find someone. Normally I wouldn’t have bothered, but given what was at stake, I agreed. Sod’s law – it had nearly stopped when the pompiers (!) arrived with a full emergency kit. That was all a little embarrassing…

Anyway, we went to check-in, and lined up - me with bloody tissues to my face. But while waiting in line, it all started again... deargod …. and then because we were now running so late, we were called to the front of the queue.

What is really interesting is that I wasn’t questioned at all about what was happening, we were checked in and sent straight through. But on the plane, it wouldn’t stop. Again, no questions – just being looked after really well by the flight attendant – ice, tissues, bags. Because we were the last passengers on, there weren’t any seats together and I needed Nic next to me to help with tissues and moral support! I’m sure all the other seated passengers were praying I didn’t sit next to them. So a rearrangement of seating was done.

I have to say that Ryanair have certainly gone up in my estimation. They said they’d need to make a call to see if there was a doctor or nurse on board if it didn’t stop during the flight (it did eventually), or make sure I saw a doctor on landing. Again, I was just so surprised that I was allowed on board the flight at all. I’d already taken Nic’s car keys at the airport, fully expecting to be turned back at check-in, and having to drive back to Bize and forfeit the holiday. Amazing!

But we made it to Porto with no other dramas. We stayed in a hotel quite close to the centre, but not on the river-side. So a fair bit of walking was involved each day – those streets are certainly steep.

Except for day 1 – when we had a different mode of transport – definitely the highlight of the trip. We’d planned to do a guided bicycle tour of the city, but the weather was looking a bit dodgy for the last two days. We found the office of the Bluedragon Tours and they said they weren’t running bike tours on that day. But would we be interested in a Segway tour? Well, yes – we’d been talking about it, but noted that the minimum age was 14, and Indigo is only 12, so we’d discounted that idea. The guide said it was more a height than age thing, and she would be just fine.

After a half hour ‘training session’ on a flat section at the edge of the river (with spectators), we were off. 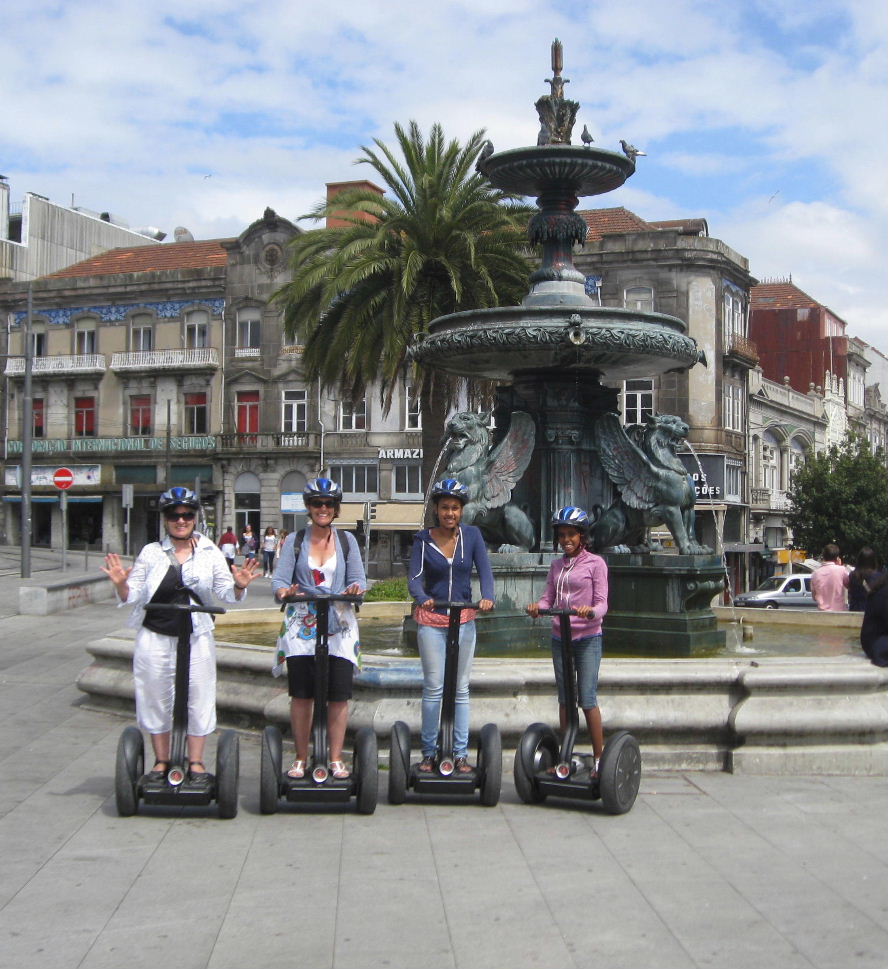 They’re the only Segway operator in Porto and Bruno the guide told us that they have an arrangement with the tram operators – we were allowed to use the middle of the tram tracks, and that when the tram drivers saw us, we would be given plenty of time to get off. 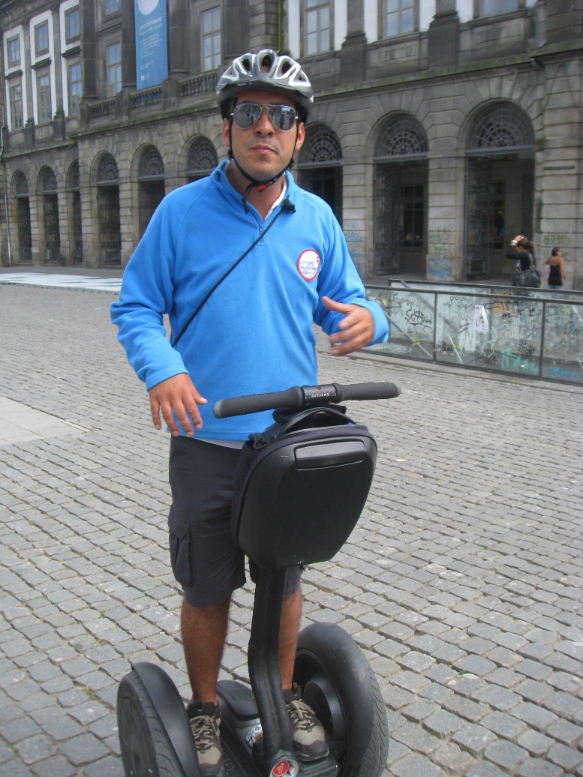 It was a little disconcerting, but it worked. It was preferable to using sometimes very crowded pavements on steep streets! We started off along the river – the flattest part – to get used to it. I have to say it was easier than I’d thought it would be.

Having said that, I would like to say that it was without incident. But it wasn’t. Only one of us came off and it was me …..

Heading into the markets, I was probably becoming a little complacent and chatting to Bruno – didn’t line the two wheels up straight when mounting the rise to the entrance of the markets and shot off – but managed to keep one foot on, and hang on to the handles. But it had a bit of momentum and I was left doing a ‘Segway dance’ until I got it under control!

No harm done except a slightly grazed leg from the wheel – and I’d provided a huge amount of entertainment for Nic and the kids and a few onlookers. I loved the whole experience – so did the kids - and I’d do it again at the drop of a hat.

Porto is a lovely city. The city skyline on the north side of the River Douro is spectacular – the other side has all the port houses. And there are many of them. 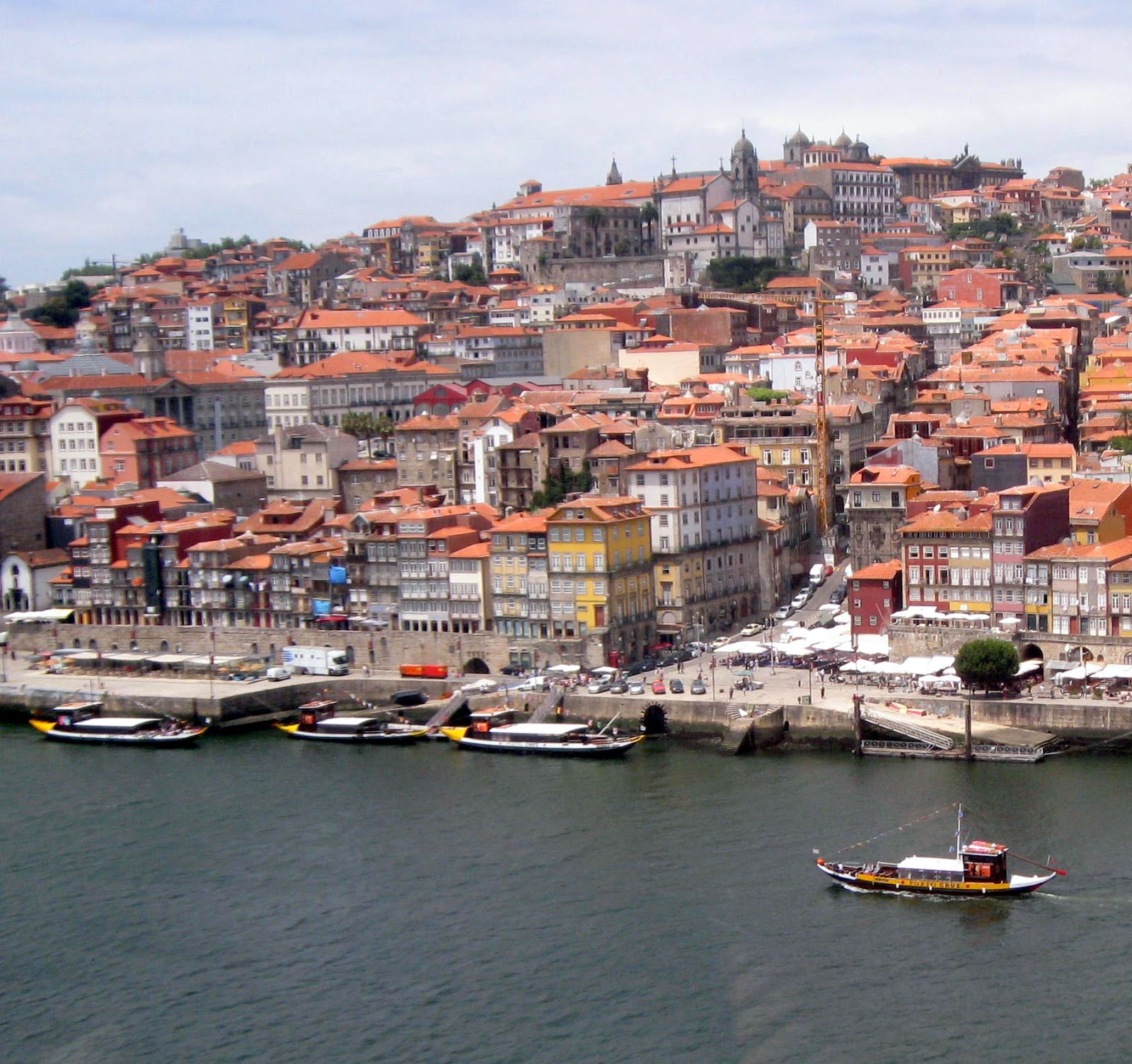 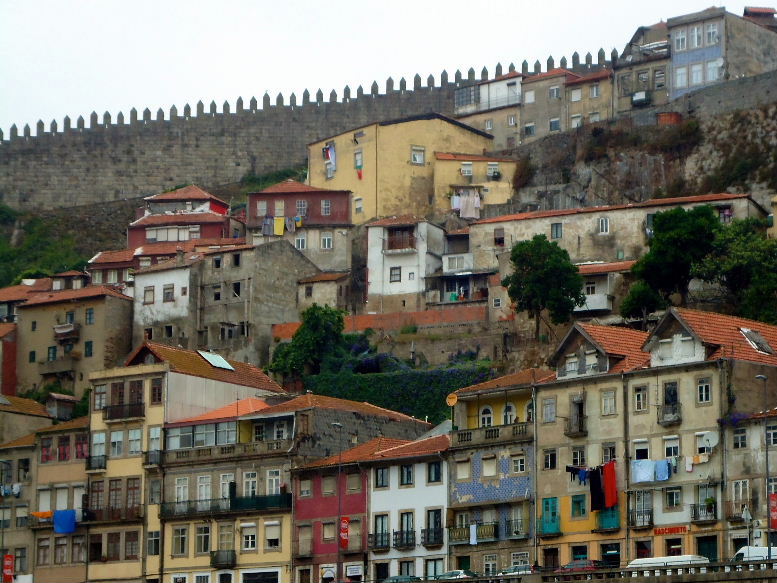 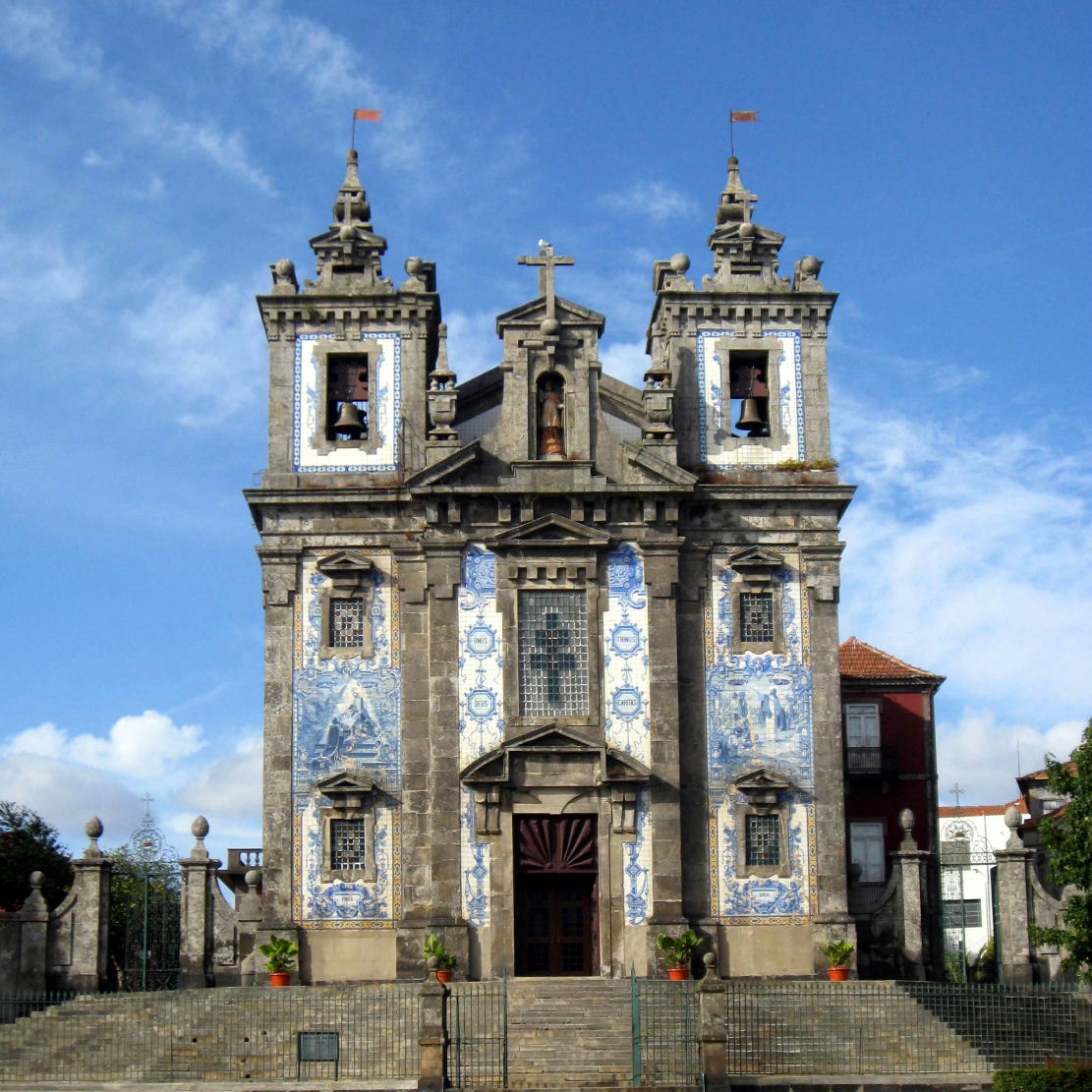 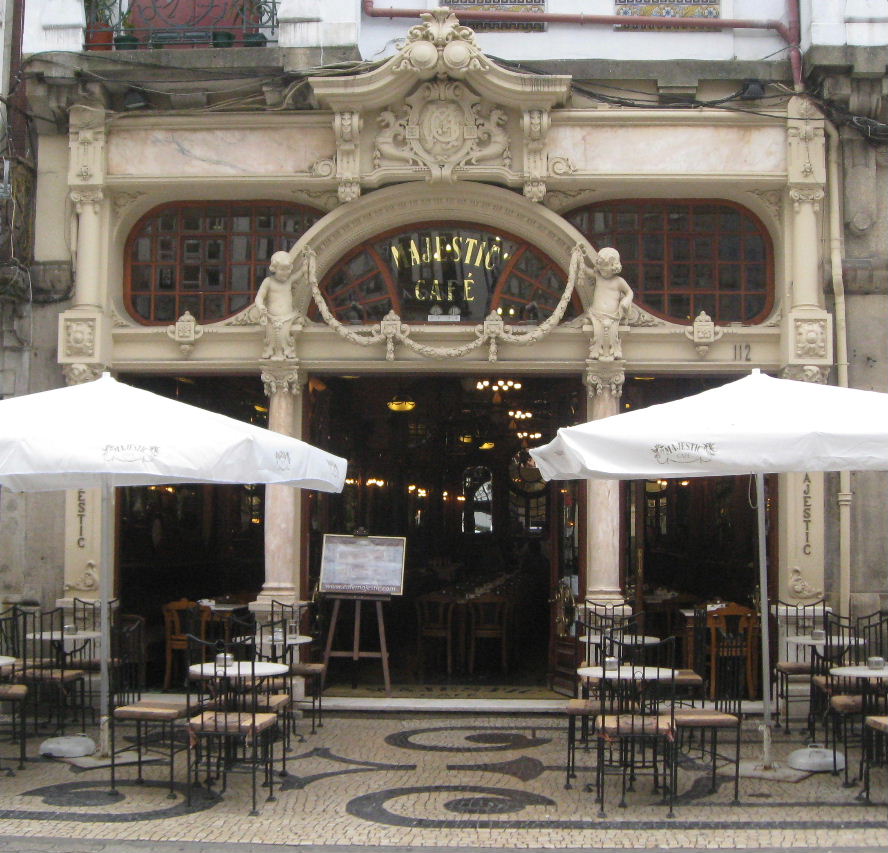 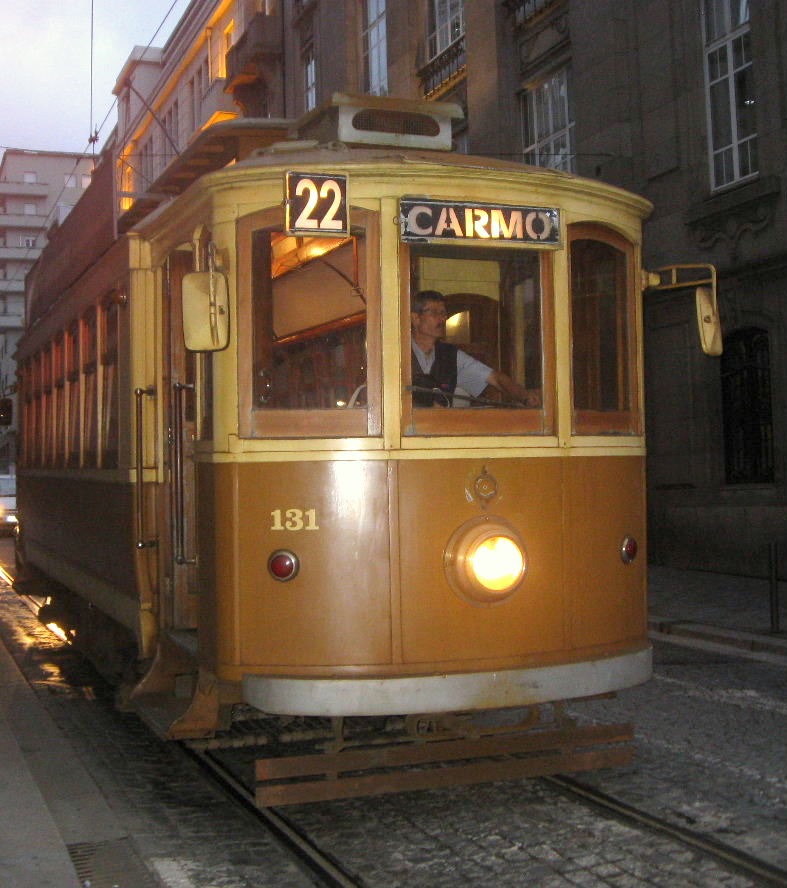 We spent the rest of our time walking around the city, seeing the sights, a little shopping, and a river boat tour on the River, taking in the six bridges. 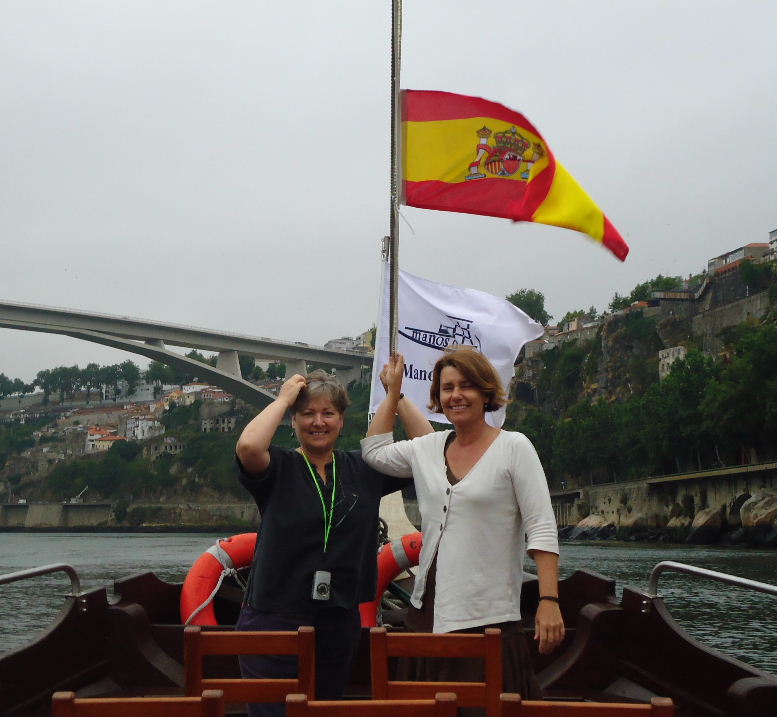 We did get a recommendation of a restaurant for lunch the "Restaurante Pescador" – in the small fishing village of Arafura, a few kilometres out of the city near the mouth of the river. 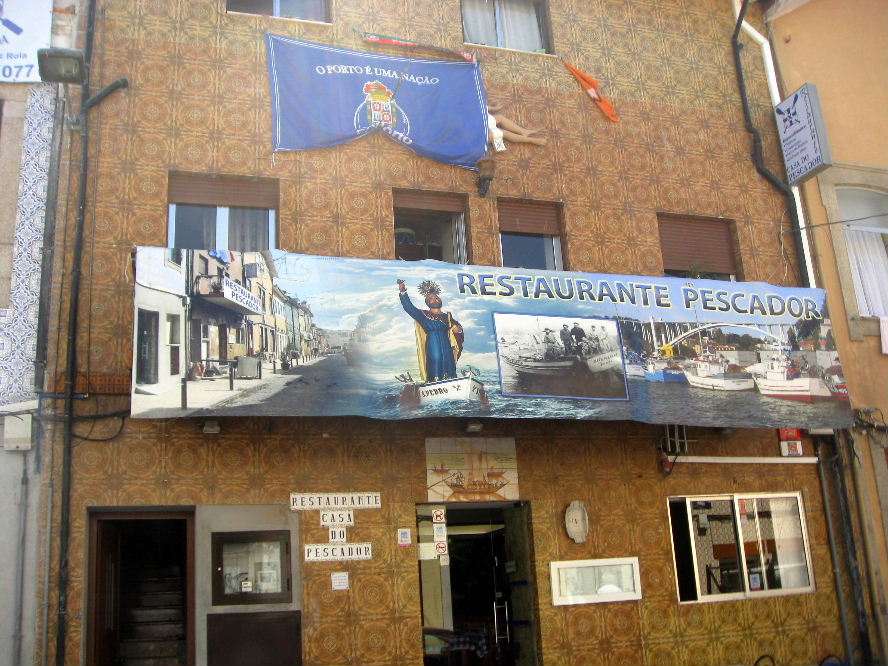 This is very much a working fishing village, and quite a few of the restaurants had their charcoal barbecues on the pavements, ready for the lunch crowd. And obviously the local residents also do their fish cooking out on the street – this lady was happy for me to take her photo. 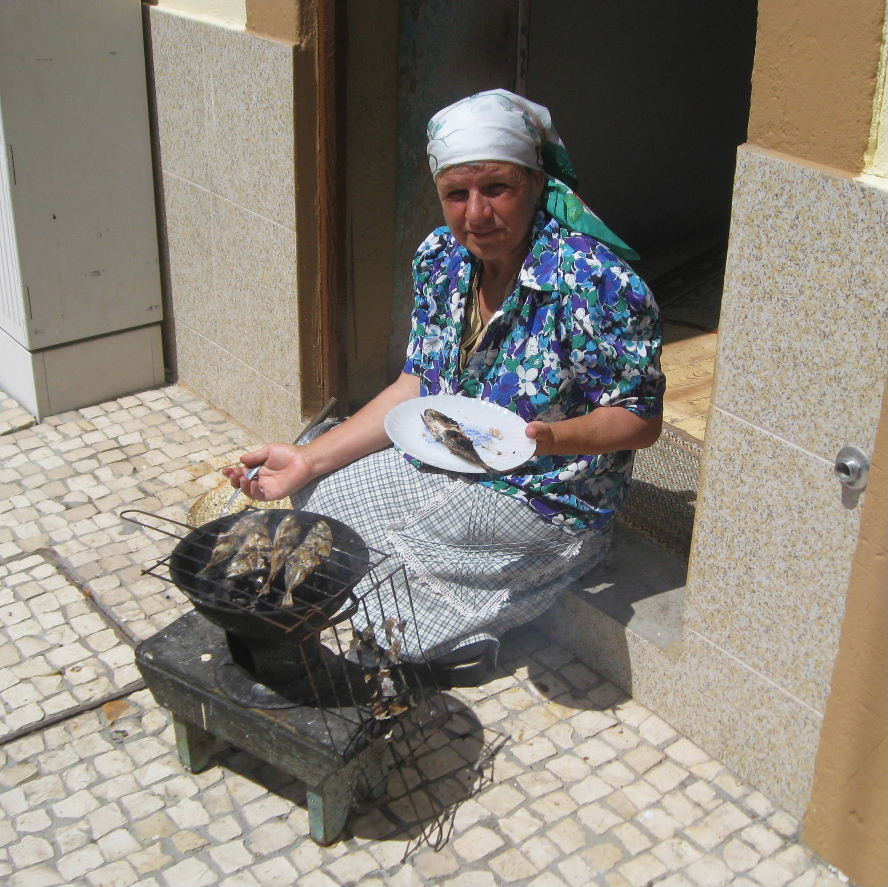 As we've become so used to drinking rose wine with meals (in summer, anyway), that's what we ordered. But what we got was a real blast from the past - a bottle of Mateus Rose! 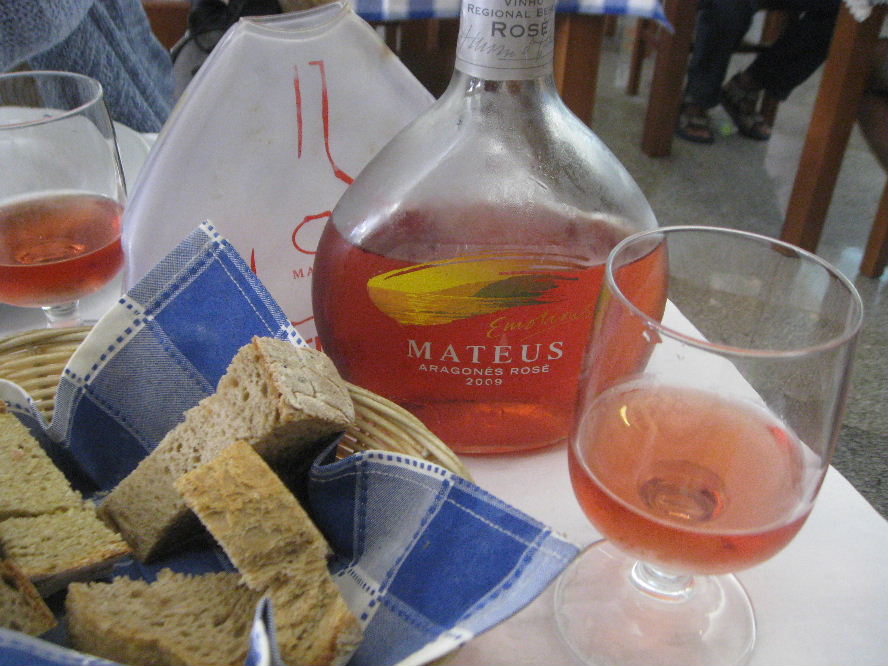 I can't remember the last time I saw a bottle of this - let alone drank it. It was fairly sweet compared to what we have here, and I have to say I prefer our local drop.

The kids ordered whiting fillets – bigger than the whiting I remember – but they were delicious. Nic and I ordered barbecued squid – hoping it would be as good as the squid we used to cook at Cheyne Beach on the barbecue. 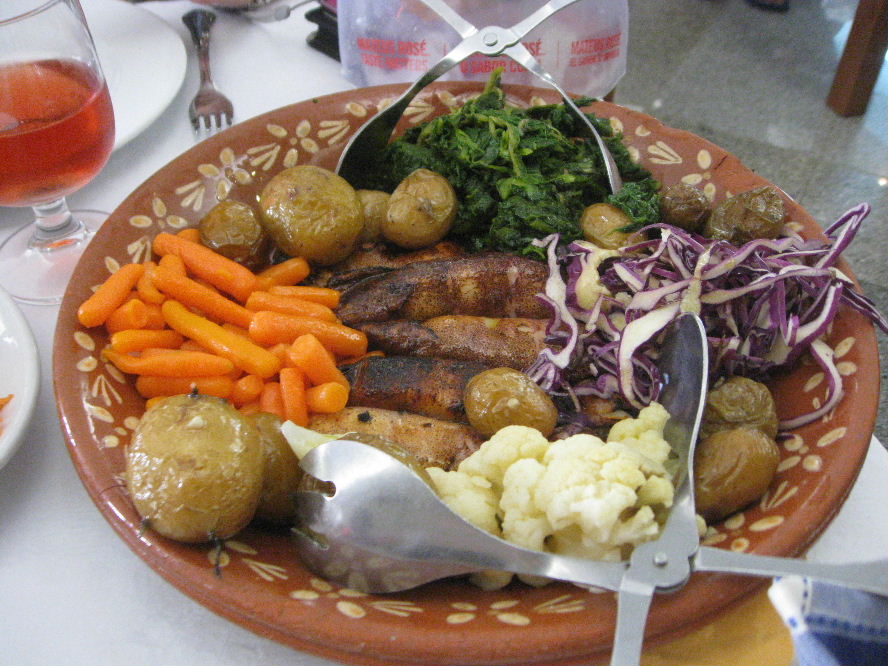 While it was good, I think our way was better! That's the squid in the middle of everything else, cooked whole - the kids tried it and didn't even baulk at the fact that it was uncleaned in the middle and needed a bit of work before eating. The servings were huge - though this was for two people. And it was so nice to eat in a restaurant frequented by lots of locals, away from the tourist spots.

What we should have ordered was the grilled fish that were being grilled outside on the pavement: 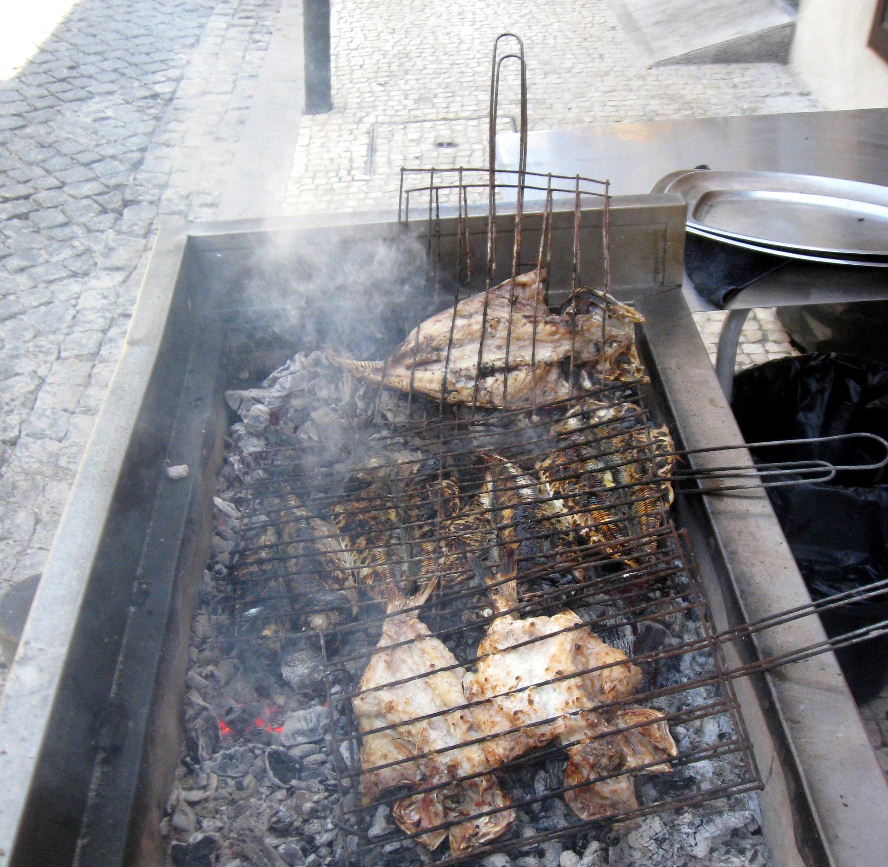 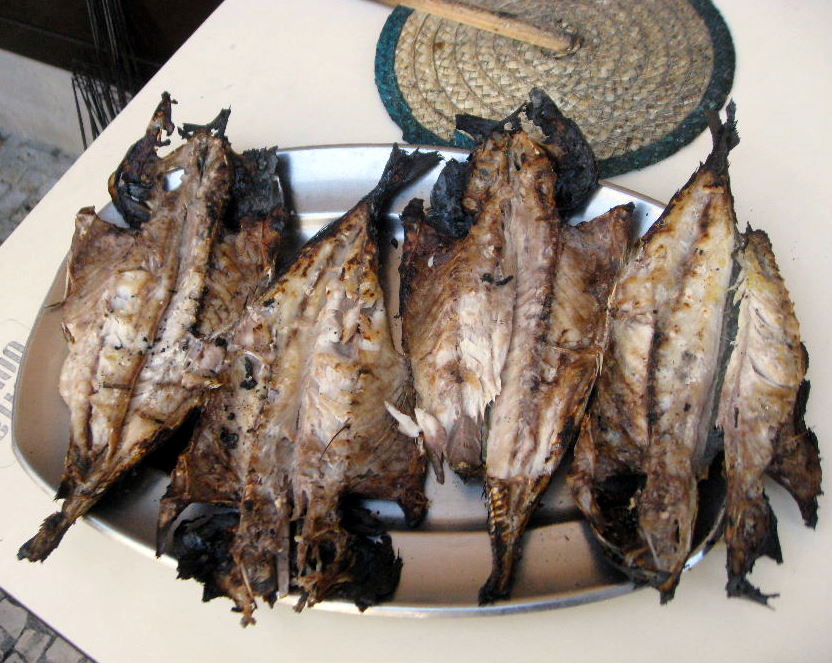 Even though these ones had been cleaned, they reminded us so much of what we grew up with at Cheyne Beach. We called them Herring Guts Feathers ‘n’ All – which were basically whole herring, fresh out of the net, grilled on the open barbecue. They weren’t scaled or cleaned – hence the name that Dad coined, and it stuck.

The guts just shrivelled into a little ball and the skin could be easily lifted off. Then the fillets were lifted onto a plate, smothered in butter, salt and pepper – and that was it! The table was laid with newspaper which was later rolled up with all the scraps. I’m in the process (it’s taking a long time….) of scanning all the old family photographs, and a few weeks ago I came across these photos below: