A little adventure the other day – involving transporting my new bed and mattress from Narbonne to Bize. I’ve been using one of Nic’s beds in the barn for nearly a year (I was one bed short when I moved across from the house – and by using one of theirs, it freed up a bit of space in the very crowded but soon-to-be-empty garage!). And now that they’re moving into their own house and reclaiming their bed, I needed a new one.

There are lots of sales on at the moment, so Nic and I headed down to Narbonne to pick up a bed.

Now, it was hot as hell this day, so by the time we’d packed the head and base board and other bits into the back of the car and tied it down, and wrestled with the mattress and tied it onto the roof, we were already a little frazzled.

We’d not gone far – on the ring road on the outskirts of Narbonne – lots of fast traffic – when I glanced in the rear vision and noticed the mattress was slipping backwards and sliding down the rear window!

Merde --- pulled into the emergency stopping lane, hazard lights on and crawled along slowly until we could pull over and fix the problem. Or so we thought.

Anyway, we headed off and got a few kilometres further up the road towards Bize. Cars are tooting and pointing.

Merde again ….. pull over again, and the mattress is now sliding off to one side! We weren't in a very good place here … busy road, and had to pull off onto the grass verge very close to the traffic.

And while we’re surveying the problem, we are still getting toots from cars.

Think very flustered by this stage.

So flustered in fact that we’d forgotten about the French breakdown laws – you MUST wear a fluorescent jacket while you’re out of the car if you’ve pulled over with a car problem. It’s a pretty strict law in fact – you must have the jacket within reach before you get out of the car. Mine (with 'British Airways' emblazoned across the back - oops) is stored under the driver’s seat.

You see quite a few people driving around with theirs slung over the back of one of the two front seats. It’s an offence to not have it ‘reachable’. Or more probably, the offence is to be caught without it, while rumaging around in the boot of the car looking for it!

And then there are the red warning triangles that you need to put 30 metres behind the vehicle. Well it took a few minutes for us to get this happening – and then the inevitable happened. A ridiculous attack of the giggles at our predicament.

It was hot, very hot, this was our second emergency stop, I was late for a 12 o’clock lunch at a friend’s house (had made the phone call and apologised and tried to explain what was happening), I was out of petrol and the warning light had been on for what seemed like forever – and this not helped by Nic trying to take a photo of me on her mobile phone! 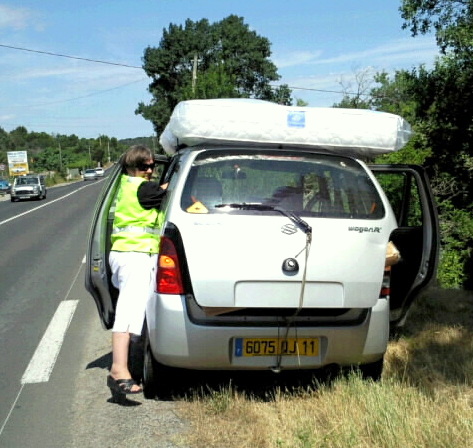 However, eventually we made it home - everything was hurriedly unpacked and left on the garage floor, I raced off to get petrol and made it to lunch 45 minutes late, and enjoyed a very welcome glass of cold wine!