Once the decision was made, I needed to find in which area I wanted to live. The Dordogne area where Steve and I holidayed is absolutely gorgeous – but I felt was well and truly ‘discovered’, and properties seemed to be out of my price range. In April 2006 I made a trip see how I felt about the Languedoc. My sister Nic and her husband Duff and their kids had spent some time in the area the previous summer. In fact, Steve and I had made tentative plans to join them for some of that break – until we realised that they were, by necessity, travelling in the school holiday period! That’s when we decided to go it alone … off-peak season.

The Languedoc was not an area I was familiar with, but they raved about it. And a little research (well, a lot really) on the internet made it sound very appealing indeed. So I convinced two friends (George, a long time friend from Edinburgh) and Janice (also a long time friend, but from London) to join me. This was really just a recce, to see if I liked the area and to try to get a feel of what it might be like, moving to France on my own. I liked the area immediately, and spent most of the time driving around the different villages to get a feel for the place. I also made tentative contacts with some agents, and even looked at three properties. As I wasn’t yet in a position to buy, I didn’t spend a lot of time on the actual property hunt.

Once the decision was made that I would definitely make the move, it was back to the UK to put my Edinburgh flat on the market to fund the purchase of a property. This all happened painlessly and I was now able to communicate with various estate agents in the area, set up appointments and plan for a return trip when my finances were sorted and the money was in the bank, so to speak.

During this time, I enrolled in an introductory French course at Alliance Francais in Glasgow, which has certainly helped a little. I also have CD’s to listen to, and a few computer programmes I use. But it certainly isn’t coming easy – I really do struggle. It is of some comfort that people reassure me that total immersion will help me no end … but I do despair sometimes when I listen to lengthy bits of perfectly spoken French and find I understand so very little of it. In fact I struggle to recognise even a single word sometimes.

So I spent quite a bit of time setting up appointments with real estate agents and booked a trip for the first two weeks of September. A huge bonus was that my sister Nic could join me at the last minute – I was dreading having to do this all on my own and having to make such big decisions. So she was there for company and much needed moral support.

The first week I saw a few houses – and I didn’t feel any of them were right. There was a particularly nice one in a small village, but over my budget, and it needed a lot of work on top of that. So I was feeling a little disillusioned at the end of the week, and realising that it was a real possibility that I wouldn’t find anything this trip, and would have to repeat the exercise at a later date.

However, a whole set of coincidences led me to ‘stumbling upon’ the house in Bize Minervois that I have bought! Nic and I had done a recce run to an area a long way to the north – not an area I was familiar with. I had an appointment the following week (after Nic left) with an estate agent to look at properties. And as she wasn’t going to be there to navigate for me, I wanted to do a test run to make sure I could get there without getting too lost. And also, as I hadn’t been to this particular area before, to see if in fact I liked it enough to even consider settling there.

Anyway, we arrived back in the area we were staying about 5.30 on the Friday afternoon. As it was still daylight, I suggested we take a 2 kilometre detour to show Nic the village that I’d stayed in back in April. We parked the car outside a garage at the end of the main street, to have a wander in the village itself. Nic pointed out that there was a sign on the garage door “a vendre”, with a local phone number. I commented that it didn’t look very interesting from the outside and that it was a local number and I couldn’t speak French – so not much point in ringing. So we had a leisurely stroll around the village, and when we came back to the car, the garage doors were open and Madame and Monsieur were backing their car in! I went and introduced myself – they invited us in – and the rest, as they say, is history ….

The house is very liveable at the moment, but lots of work envisaged. I have some of ideas of what I want to do with the house – one is to turn the barn out the back into an apartment that I would live in, and divide the house into two small self-catering apartments. Bize-Minervois is a popular tourist destination in the summer, so I'm hoping there'll be a demand for this tpe of holiday rental. I'm not sure that I’ll get planning permission for that, and even if I do, I suspect it will prove to be too expensive to go down that road. So perhaps demolish the barn, turn the small courtyard into a real garden, divide the house in two and live in one part myself!

However, this is all a little down the track. The furniture is being picked up on the 29th November, arriving in Bize on 7th December. I fly down on the 4th December, signing final papers on the 5th, and meeting the removal van on the 7th! So it is all coming together. Also going in the van are 16 x 6 litres emulsion paint. Apparently to buy paint (interior) in France is for some reason incredibly expensive. And I’ve learned from several sources that if you have a van heading down to France, it’s a good idea fill it up with paint! So while I find out about planning permission, I’ll be doing a cosmetic/redecorating job on the main house.

But even that won’t start until the new year as I’m going to spend Christmas in Canada with Nic and her family – I just don’t feel I want to spend my first Christmas in the middle of winter in a new village on my own. Next Christmas will be a different.
at November 19, 2006 1 comment: 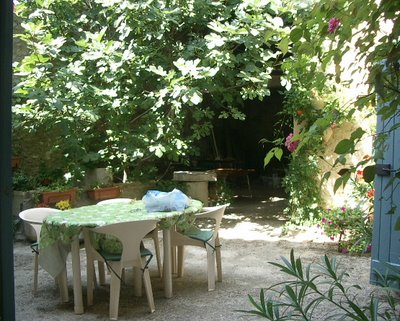 Background: In 1995, I took a year’s leave from my job in , and travelled to the . I left my son Paul home looking after the house and attending university. I spent the year working , travelling in and further afield. I returned to my job in for two years and then returned to the (), to remain indefinitely.

After several more years of working and travelling, and eventually re-mortgaging my home in Perth to the hilt to buy my flat in Edinburgh - I met my soul mate and best friend in the world, Steve Kemp. I moved across to and we got married. We had both, in our previous lives, visited various parts of . Together, in 2005 we drove to and had a fabulous holiday. Steve was by this time not well – in an ideal world, our dream was to have taken early retirement and eventually move to , with family visits back to and the . Sadly, I lost Steve in November of last year. I now feel that there is nothing to make me want to stay in the . I could have gone back to – and perhaps one day I will – but I feel that if I do make that move, it will be a permanent one. And I don’t feel quite ready to commit to staying in the one place for the rest of my life. I figure that if I did move back to the now, I would be very unlikely to move back to the northern hemisphere again. Although I am looking forward to a new start and a project to focus on, the move is tinged with sadness. So now, with more than a little trepidation, I find myself packing up and once more heading off to a new country.

I have over the years maintained a website, mostly containing family and travel photos. I also used to keep travel diaries of various trips I’d done. Although I’ve kept up with the posting of photos to the website, these last couple of years the ‘diary’ side of things has certainly gone by the wayside. But as I will be cancelling my internet account when I leave shortly, and there will be a gap before I get sorted in with a new ISP, I have probably put the idea of maintaining a ‘proper’ website to bed. And so I’ve decided – and been encouraged by friends – to publish a record of my move and new life in . An easier way for sure than writing many long and detailed emails. So I’m joining millions of others out there who are publishing their Blogs.
at November 18, 2006 5 comments: