The main house has been full of holiday makers this last month or so (a good start to my new venture!) and I’ve had my old friend Jillian visiting from Perth and staying with me in the barn. Her travels have taken her first to Bulgaria and then on to Italy.

An introduction to the red Minervois wines and a little duck confit …. 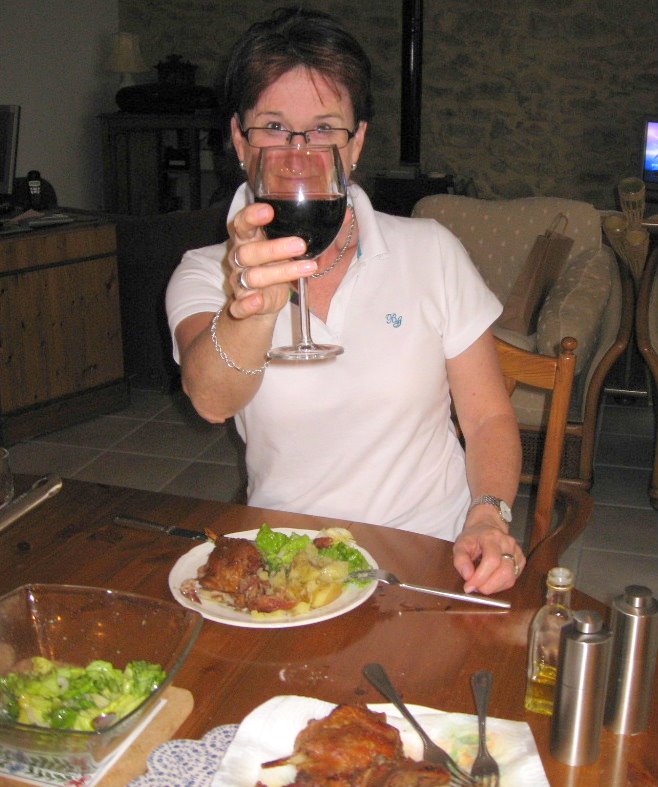 And we also got out and about – a visit to the Millau Viaduct, Roquebrun and then a drive back through the beautiful Black Mountains - 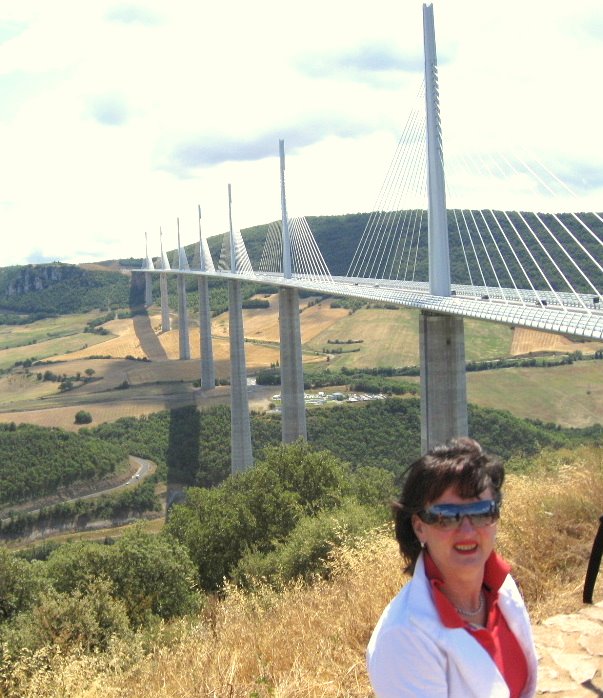 In the village of Montady – a dog in the window - 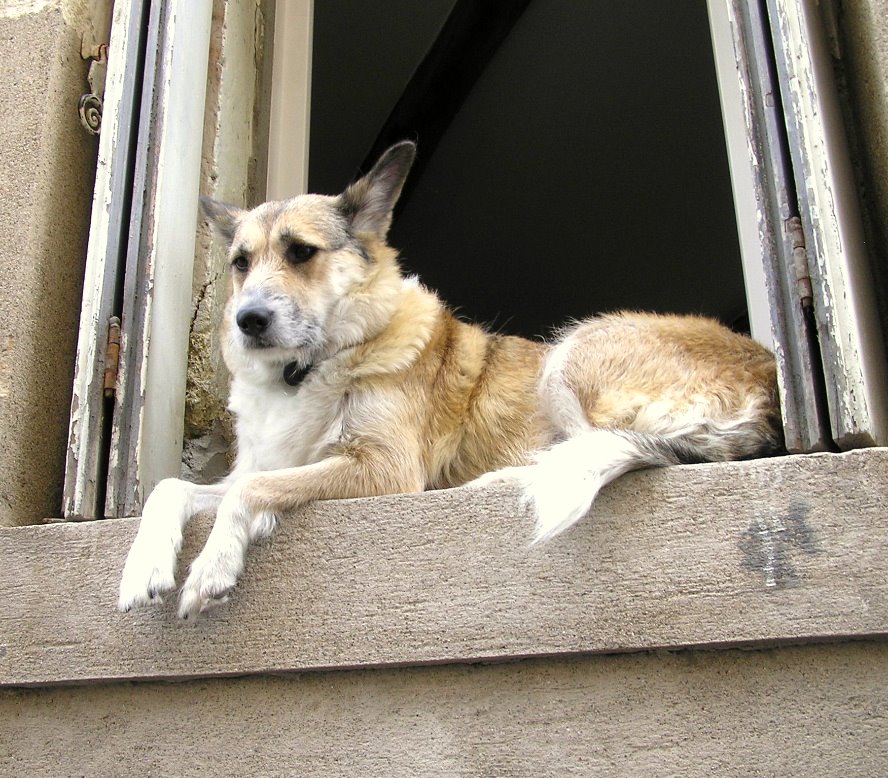 A vide grenier in Moussan - 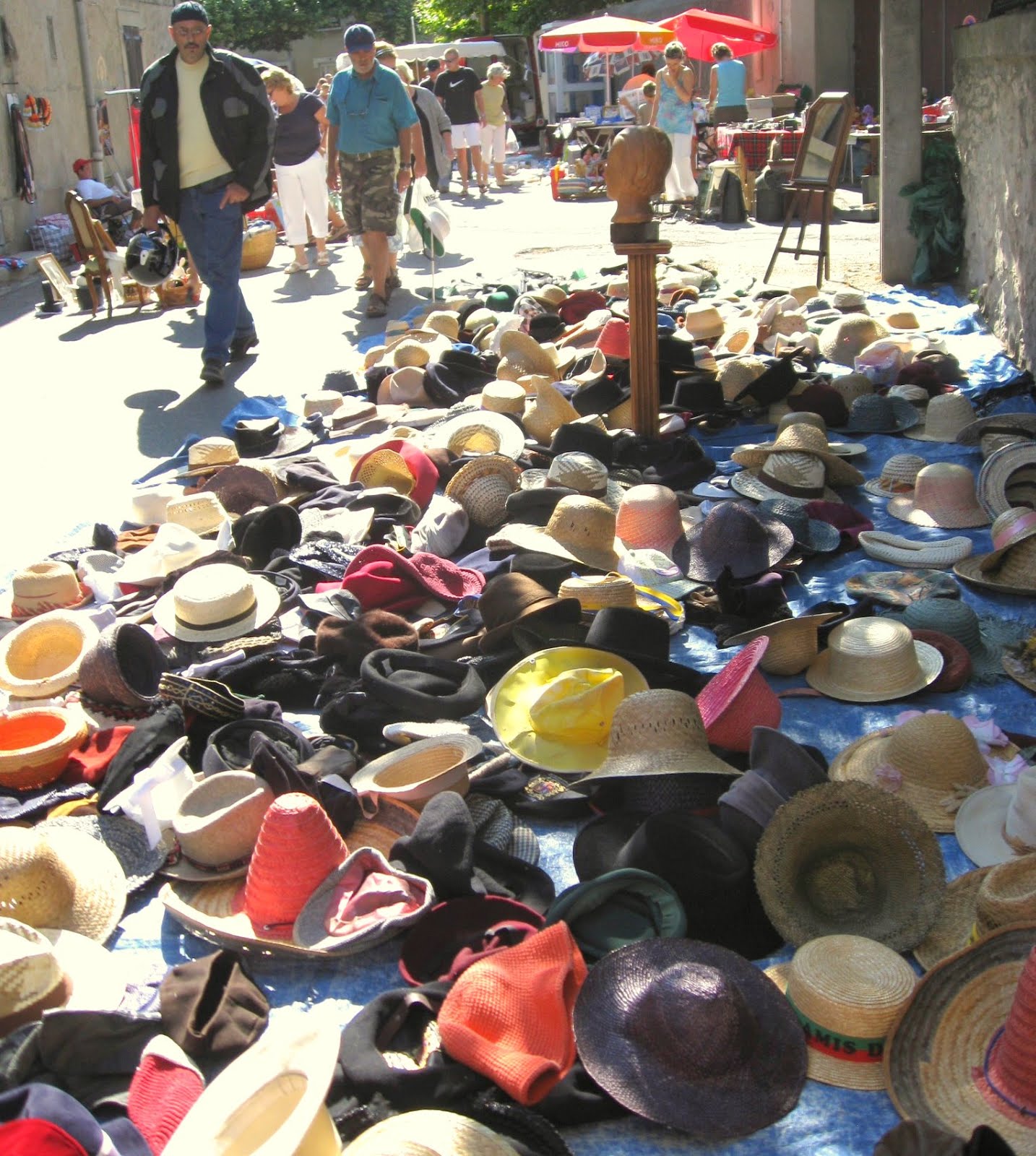 … a day out to the medieval market town of Mirepoix for the fabulous Monday market …. 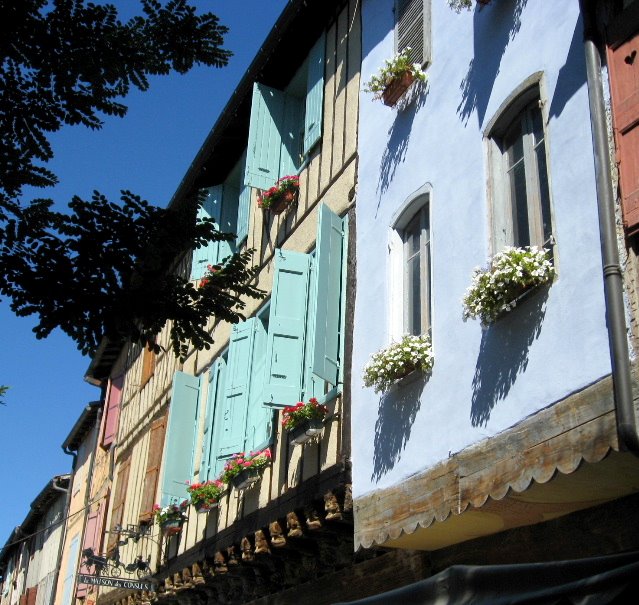 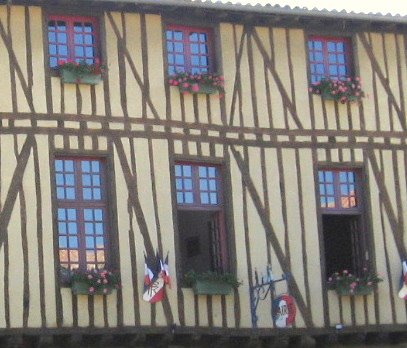 It’s such an interesting market – well worth the trip. I rarely buy flowers for the house, but couldn’t resist this 4 euro bunch of assorted sunflowers. 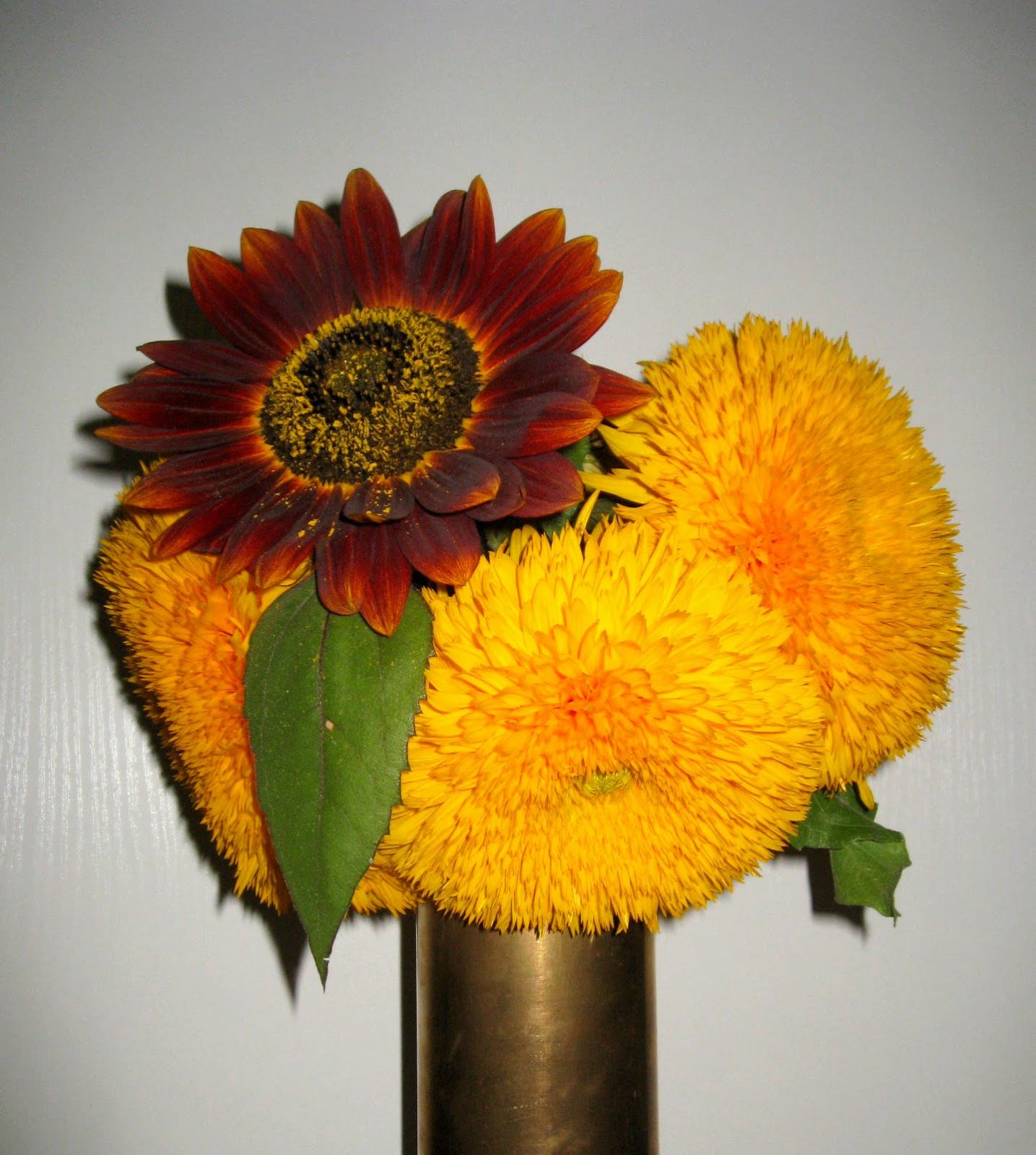 And this is where Jillian did what she often does when visiting another country – buy some music of the region. So here in the square was this lady singing some very traditional-sounding French songs, accompanied by her organ grinder ....
...and so this is the music that we listened to on the CD when we had friends around to dinner that night!

And what an interesting night that was! We were sitting outside, and smelled something burning that definitely wasn’t dinner. It got stronger and stronger and we figured something may be on fire out in the street.

And it certainly was – 20 metres from my front door! 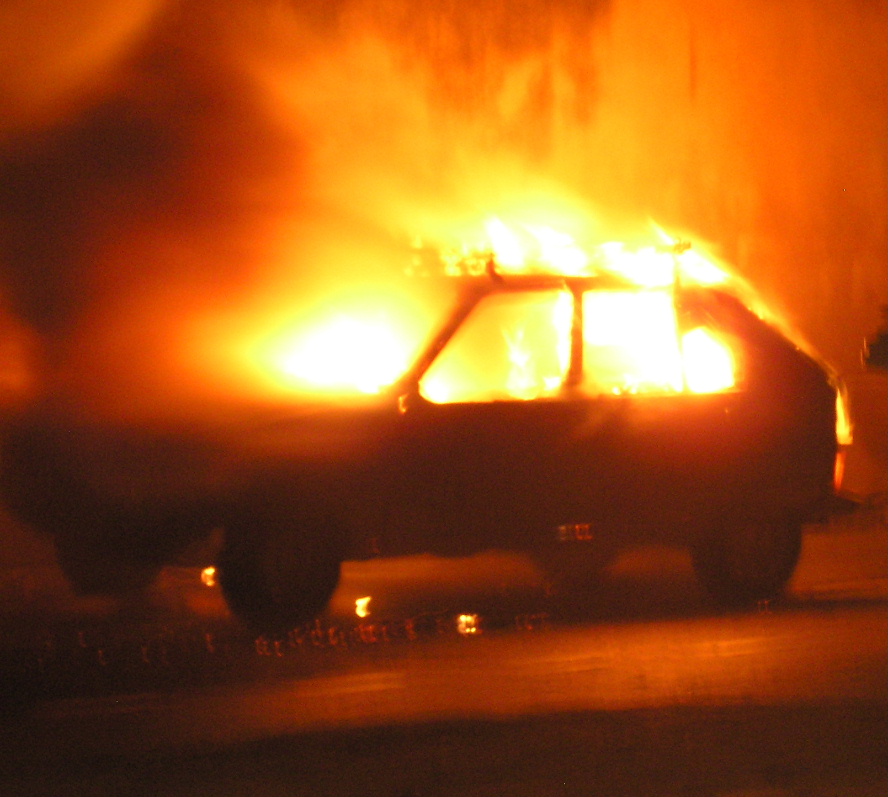 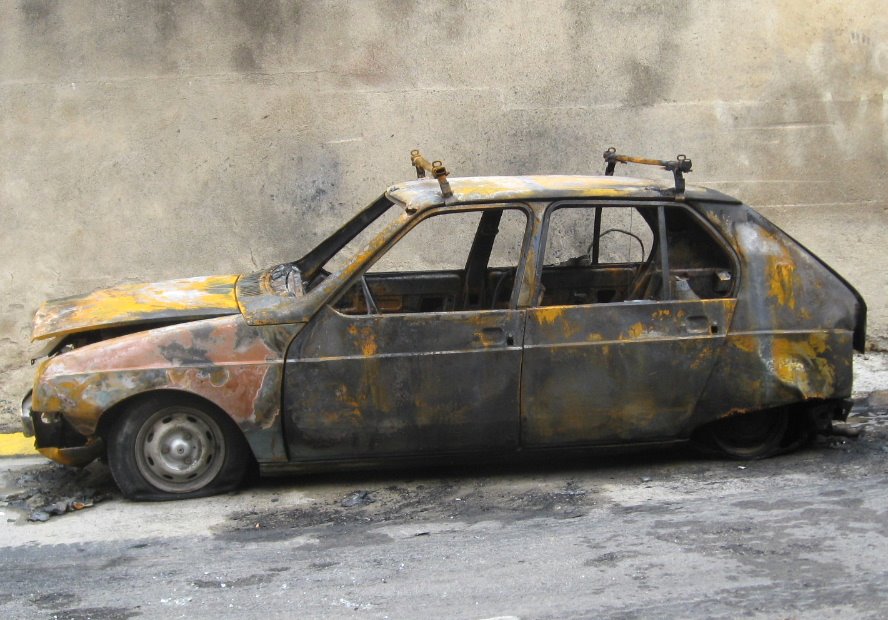 The pompiers were pretty quickly on the scene, but too late to do anything but hose down the remains.

And here’s the latest bit of family news – which I haven’t written about up until now - because until the air tickets were bought, I could never be sure that it was actually going to happen….

My sister Nic and her kids have moved here to France! Initially for a year, but hopefully for longer. So they arrived on Saturday into Toulouse and it’s been all-go since.

With two adults, two kids (Morgan arrived only last night), four big suitcases and hand-luggage, things were pretty tight in the car – to say the least.

Sage and Indigo were sandwiched together in the back, next to a large suitcase. But they hardly stayed awake for two minutes on the drive back! 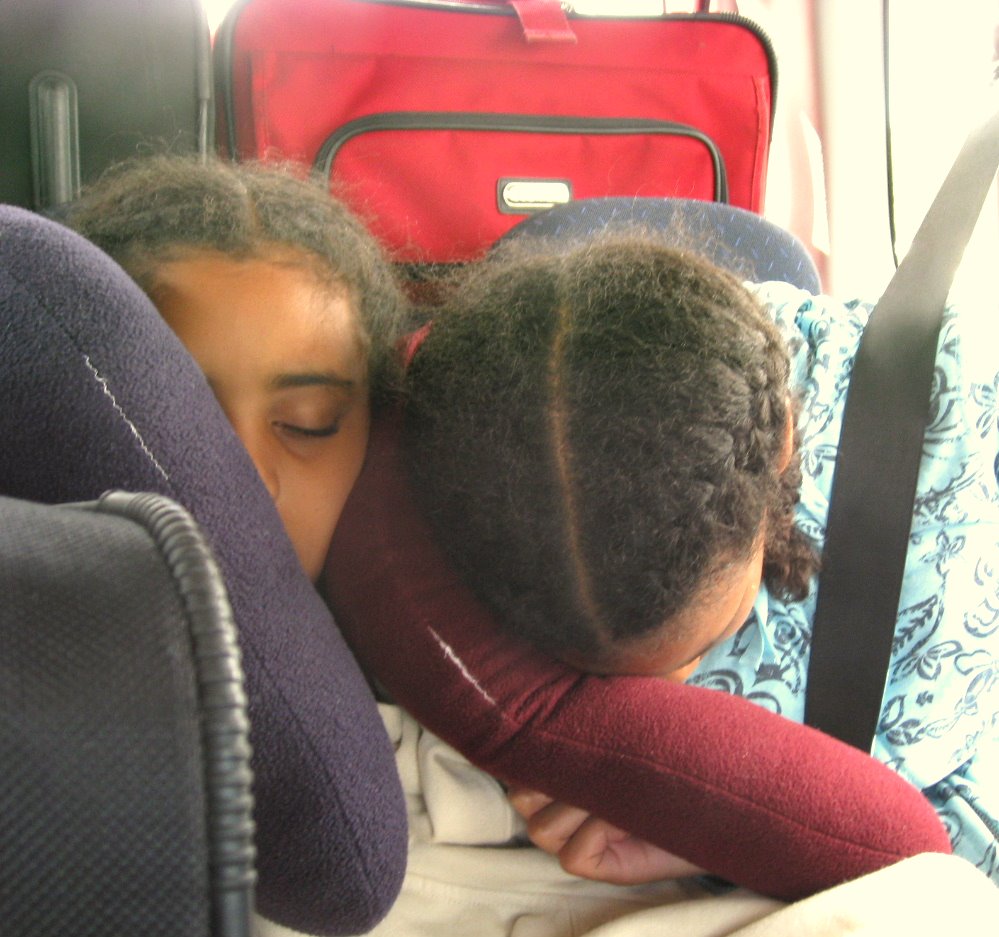 They’re staying in the big house (but will be moving into the barn with me when the few remaining bookings are here) and perhaps buying in the area.

In the meantime, Indigo the youngest has been enrolled in the Bize primary school, Sage the middle daughter is enrolled at College Marcelin Albert at St Nazaire, about 6 kilometres from here. And Morgan the oldest is going to the International Bilingual School at Aix-en-Provence.

It’s been fairly hot here this last week, so the kids have been spending a fair bit of time swimming down at the river. Last few days before school starts.

There are a few nerves about starting in new schools but already they’ve met some kids of friends, and I’m sure they’ll be just fine. 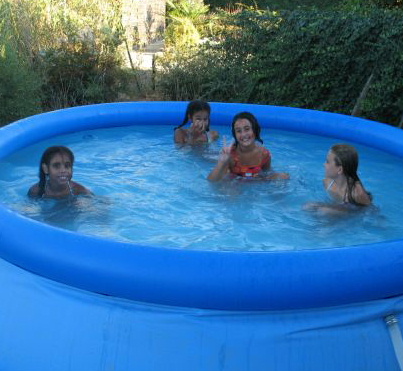 New friends in the pool - BBQ at Margaret and David's
Another up-side of them being here – hopefully they can help me with my French - all else seems to have failed!
at August 30, 2008 No comments:

A bit of a garden update …. I’ve planted dichondra between all the paving stones and also also put it down in a few places as a no-mow, low traffic lawn. 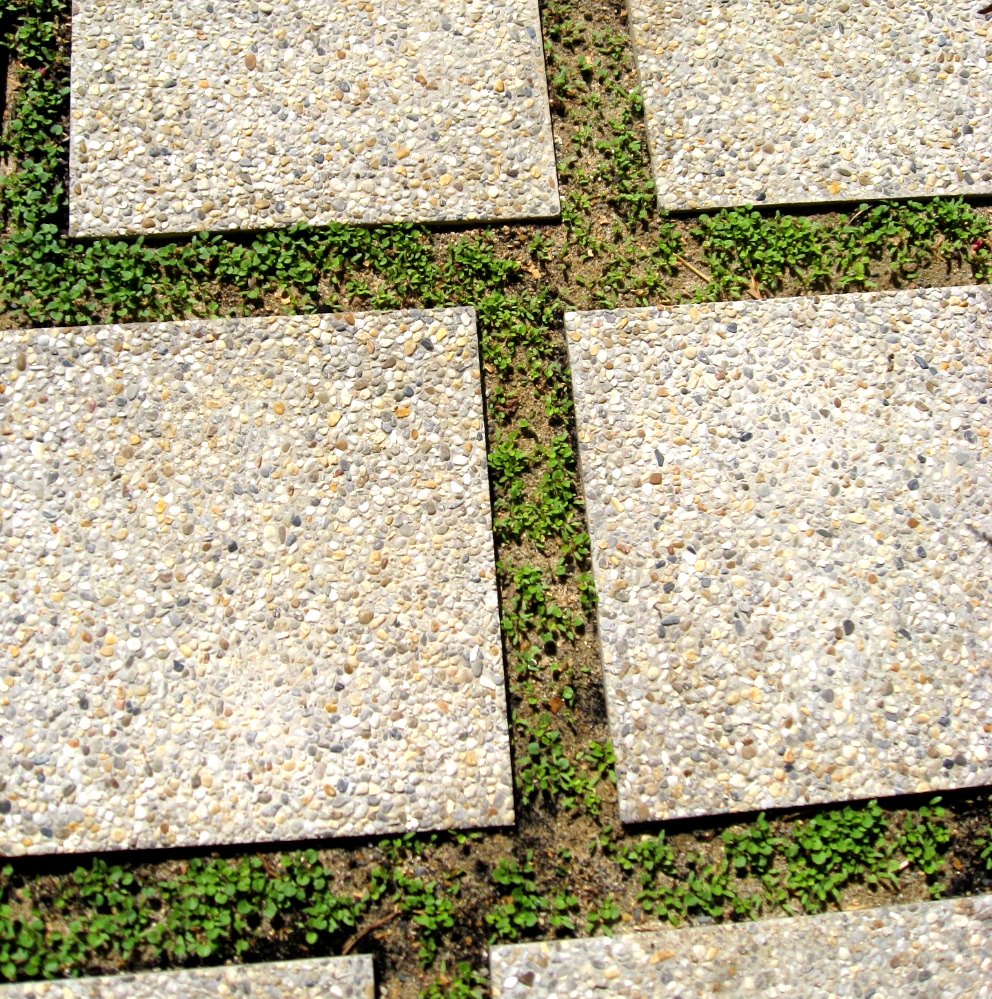 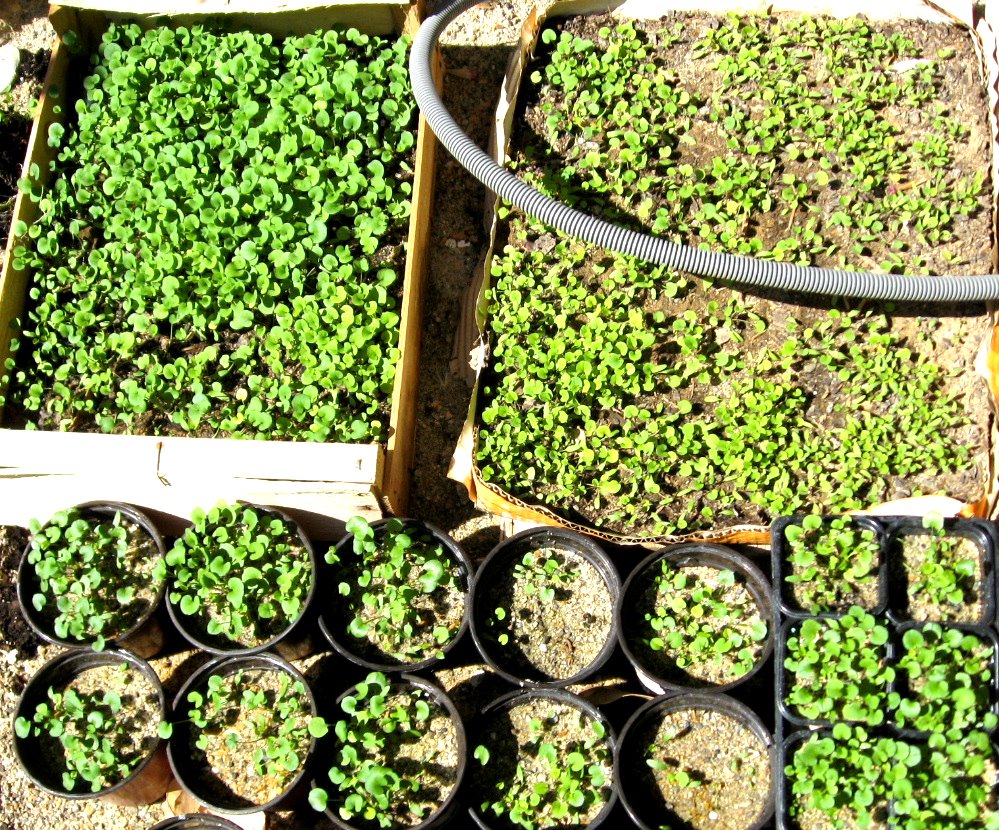 A bit of greenery to give the illusion of ‘cool’ – and it’s coming on a treat. I got some of the seeds started in flat trays a month or so ago, and have planted out little tufts of it – so hopefully before long it will cover completely. I’m really enjoying pottering around out there.

And I’ve got a few other bits and pieces in – including a border of lettuce – quick (albeit temporary) cover AND salad at hand. 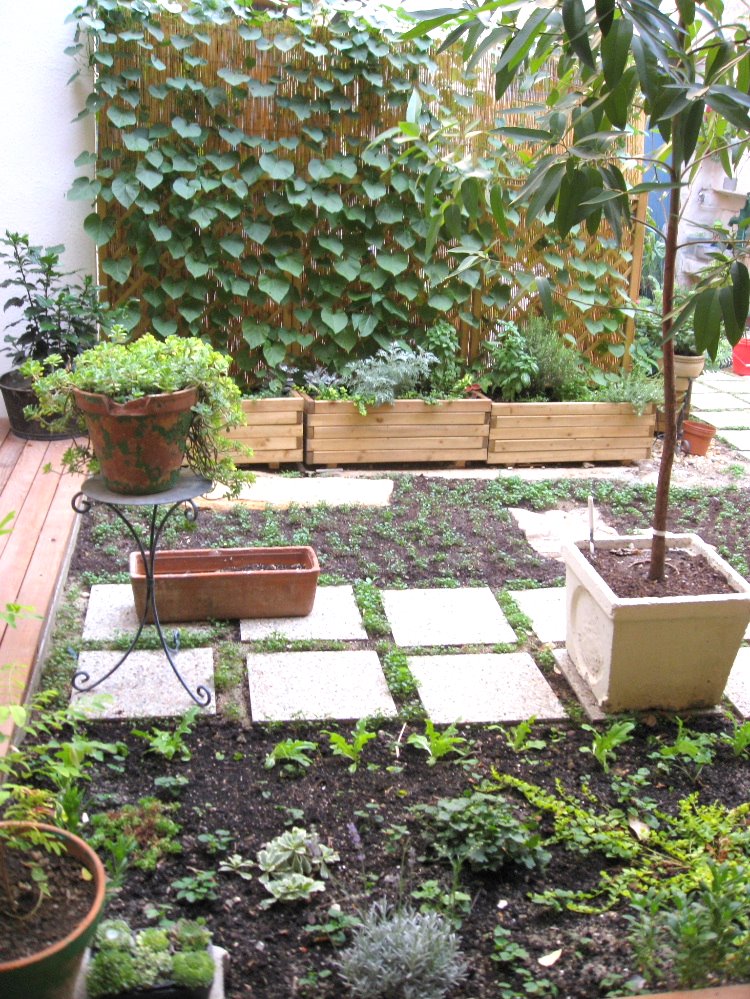 And then there will be the fish-pond. I’ve always had fish ponds where possible – in Perth I had two in the back yard. One was a monster I dug and lined with heavy-duty plastic. The other was the old bath tub from the bathroom upgrade, sunk into the ground. Easy to dig in the Perth sand – impossible here with the clay and rock of the courtyard.

However, it’s ironic that again I have a bath tub that I’m going to use as a fish pond - and it’s a beauty!

I’ve been looking around for ages, and was nearly resigned to buying a boring pre-formed rectangular plastic one that I’d have to disguise with rocks and/or plants, when I stumbled upon this at a brico in Beziers. So this will be an above-ground feature. But better still, I managed to negotiate the price down to exactly what the plastic one would have cost!

I wanted to take a photo of it heading out of the shop on the trolly and asked Msr. to stop – and he asked if I wanted him in the bath for the photo. Well, yes! I said - he climbs in, and here he is looking happy as a sandboy! 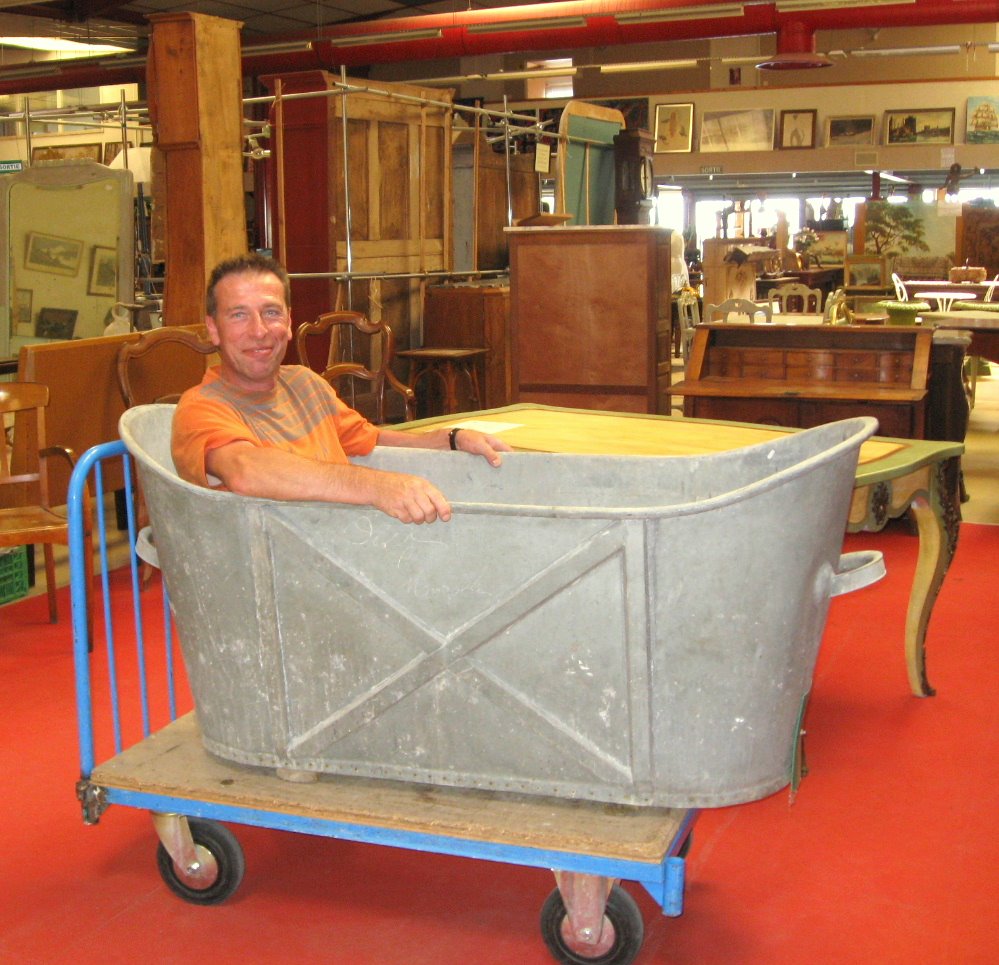 So, my next project is to level off a bed of sand to put it on, and get it stocked with water plants, etc. I always knew I was going to put a fish pond in the courtyard somewhere, so during construction I asked the electrician put a power lead out near the verandah for the pump/filter.

And for a little reminder of my happy years in Scotland, with a with a splash of blue and white paint on the sides, I could have my very own saltire!
at August 13, 2008 No comments:

…. and under threat of death, my lips are sealed!

Seriously though - even if I wanted to spread the word, it’s well and truly off the beaten track and I probably couldn’t retrace my steps there again anyway. But I can say it’s on the River Orb and it’s up in the Black Mountains a bit.

So with the Family Bowditch, I spent a lovely afternoon of river swimming and an evening picnic. The water wasn’t as cold as our very own River Cesse here in Bize and made for fabulous swimming. Interestingly, stretches of the Cesse up-river appear dry in the warmer months, but in fact what’s happened is that the river has gone underground. And so when it re-surfaces further downstream, the water is rather ‘fresh’. Very invigorating on a hot day, that’s for sure. 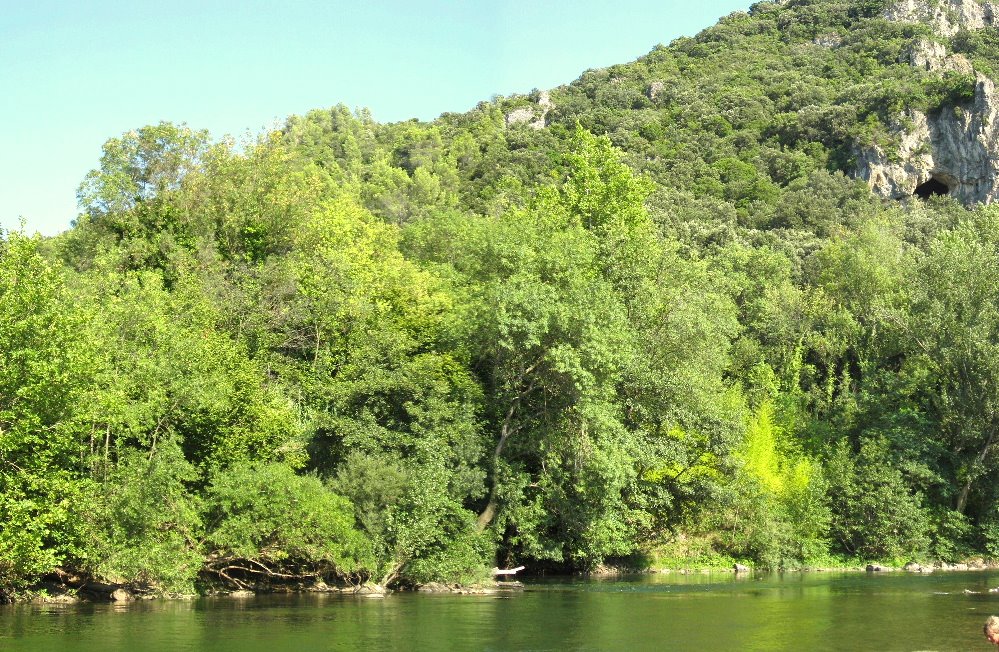 Being a hot day, there were a few locals and visitors about, but we were prepared – a small blow-up boat to take all our goodies to the other side of the river to a quiet pebbled area with hardly anyone in sight.

Soooo easy going downstream with the strong current – much more tricky getting it back! And it was a good thing we had it – there was a bit of drama in the afternoon when a young boy called out for help – he’d dislocated his shoulder – and it doubled as a raft to take him back up-river.
So sadly not a great afternoon for everyone, but the pompiers were called on someone’s mobile so hopefully all went well for him after that.

The scenery was magic – like something out of a movie – and of course there was a perfect diving rock into a deep pool. And here’s David doing just that! 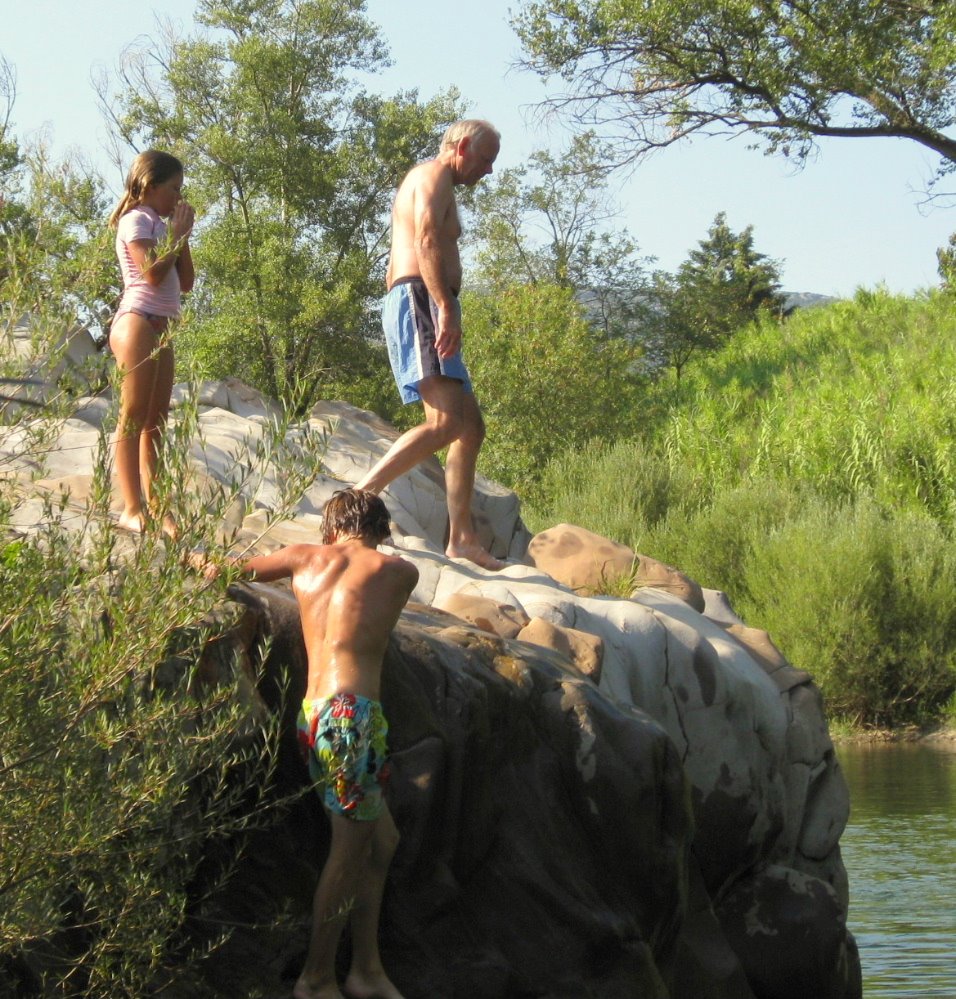 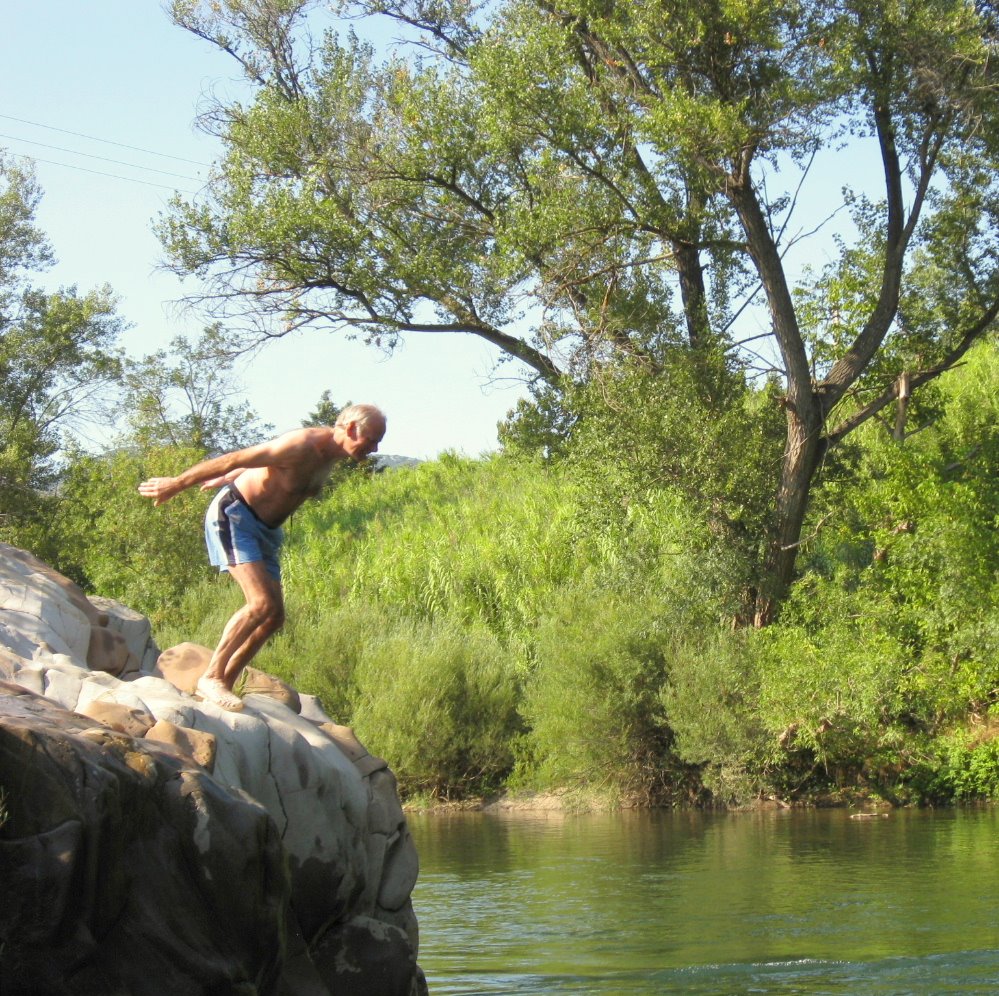 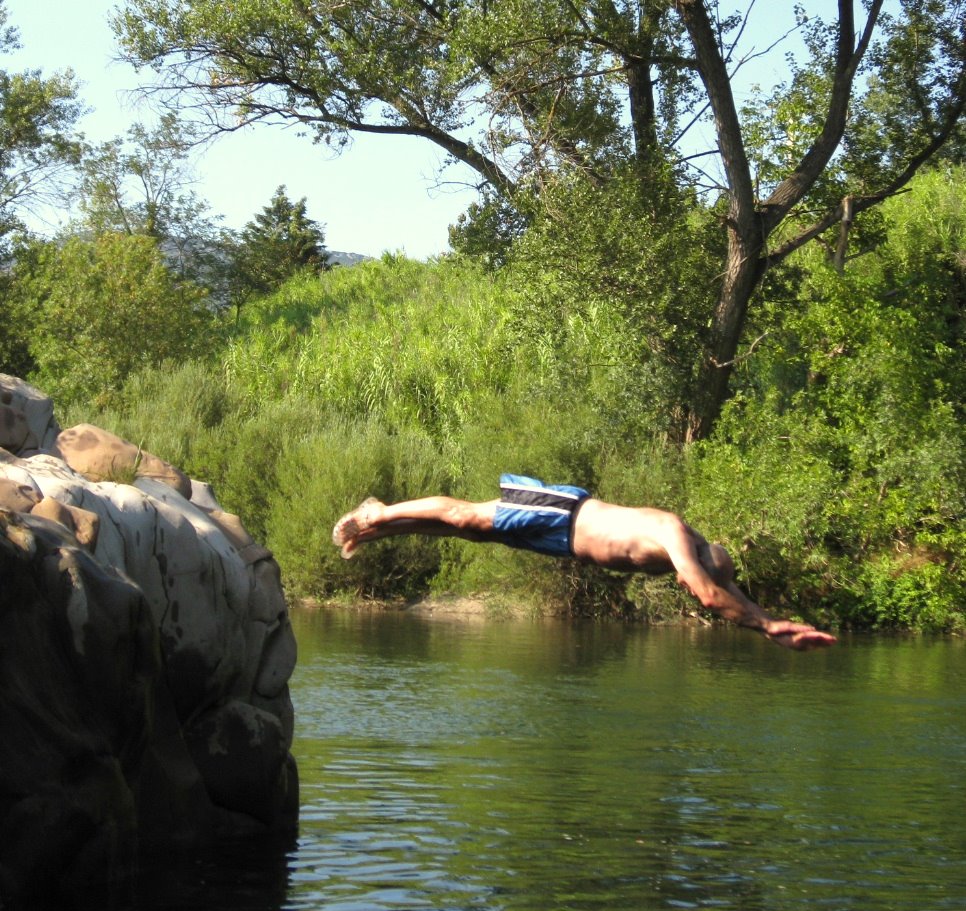 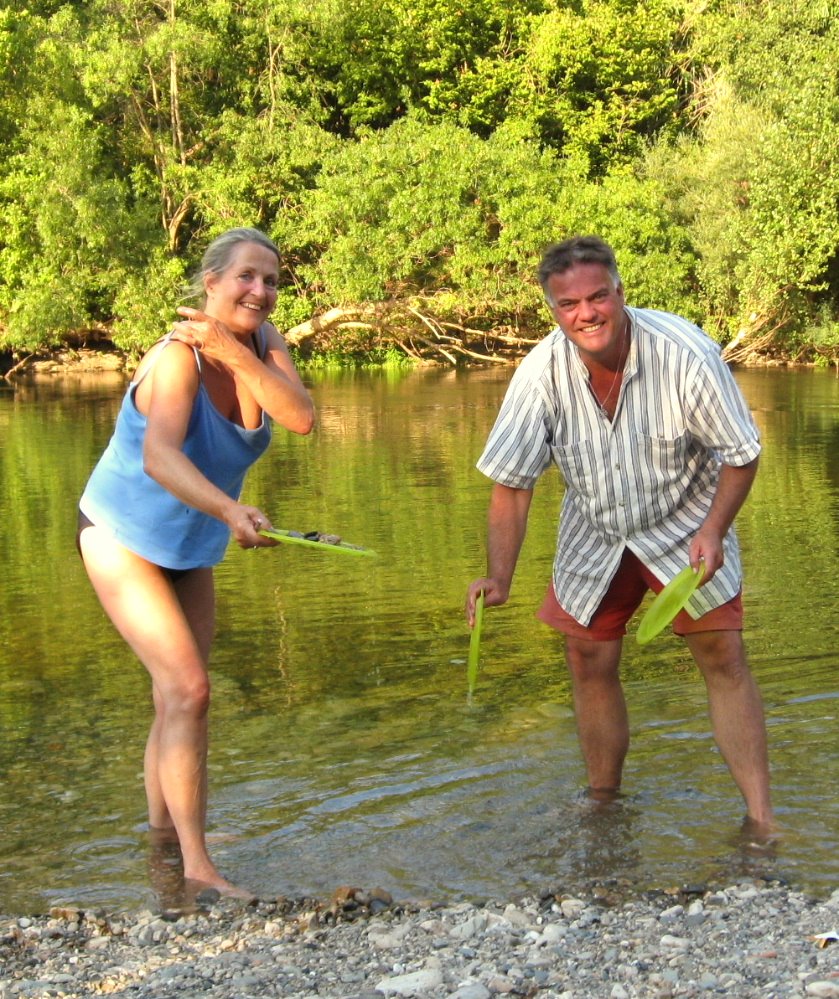 Miki and Camilla - washing up duties
… 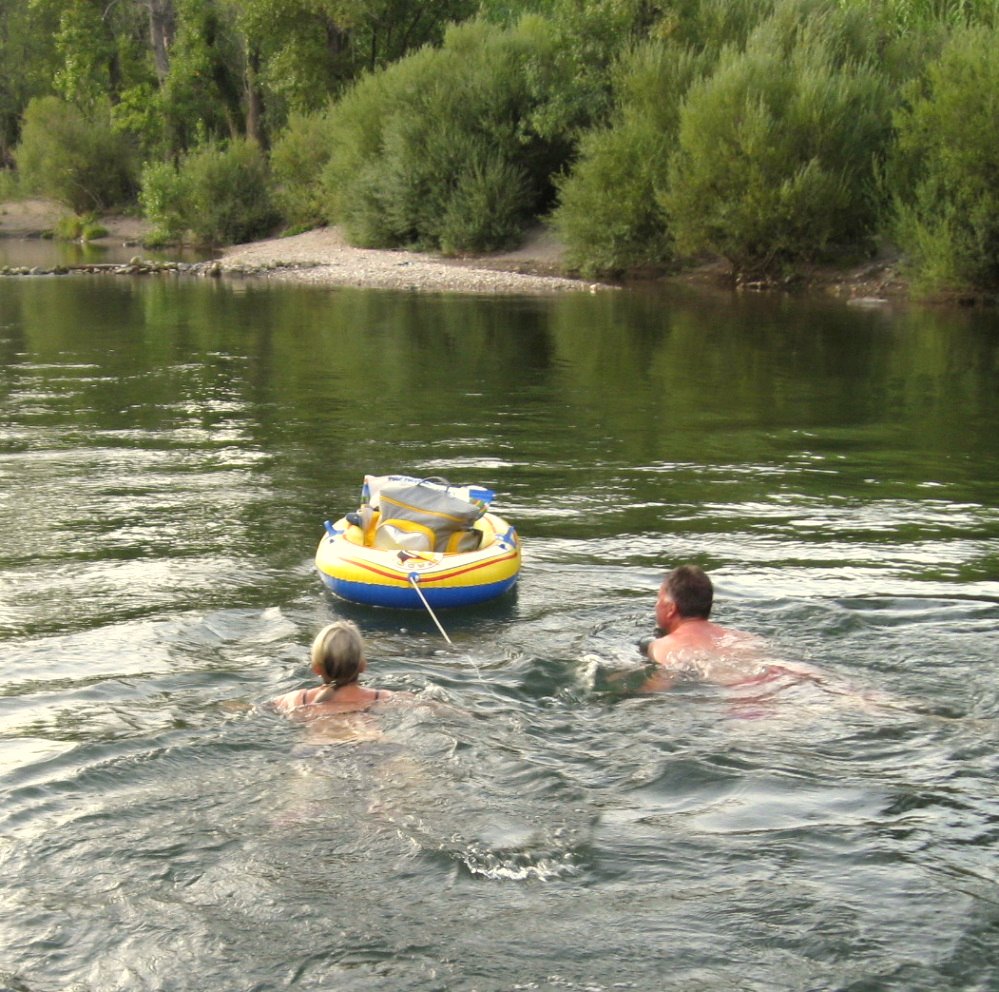 And the trip back - at dusk - to the other side of the river, against the current …. 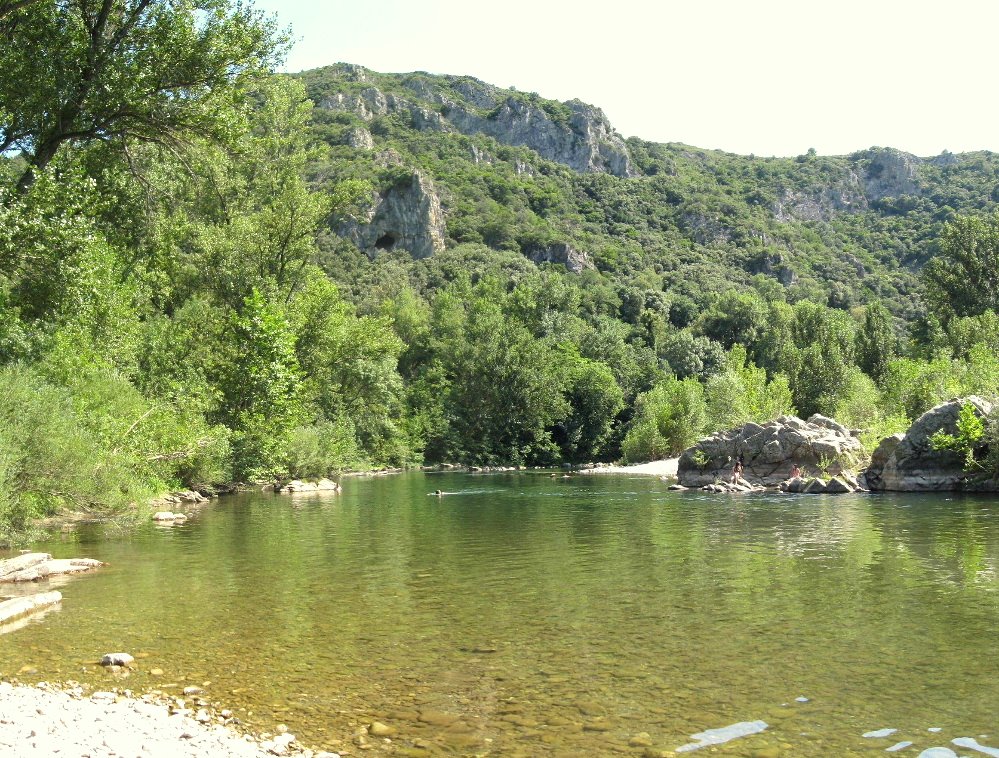 What a magical place!