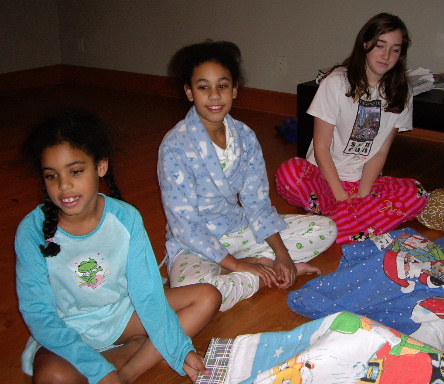 Indigo - on the ferry from Vancouver to Gibsons. 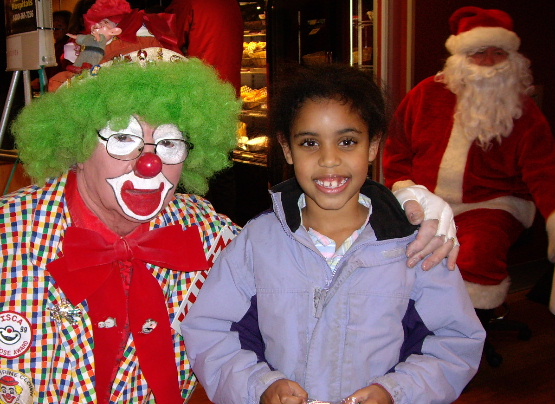 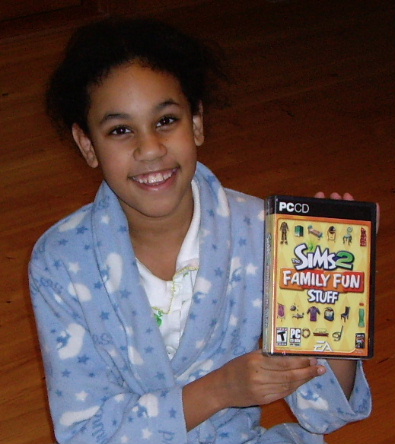 Morgan and her friend with their gingerbread house. 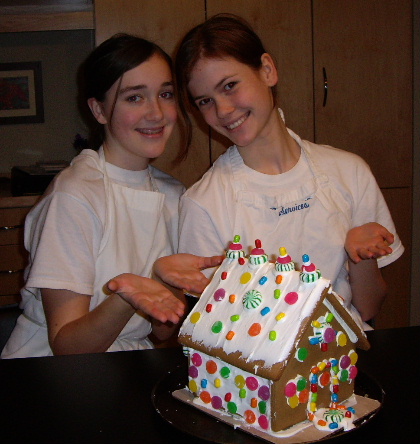 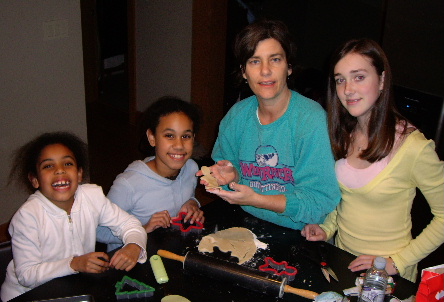 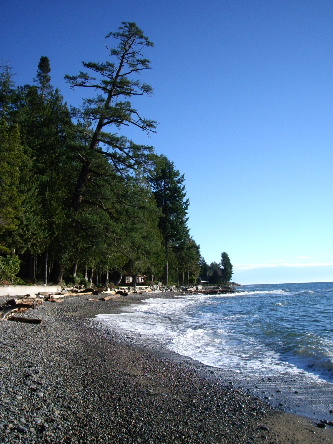 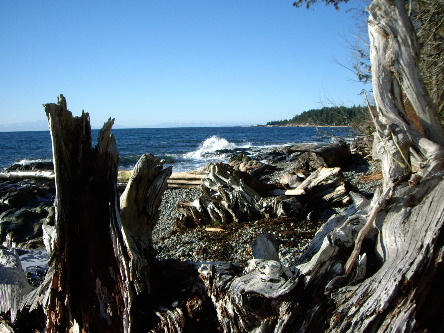 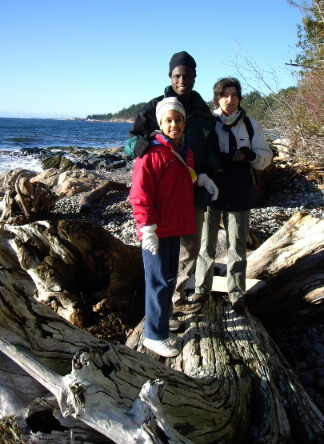 and the forest - only to be ventured into
with a can of bear spray at the ready.... 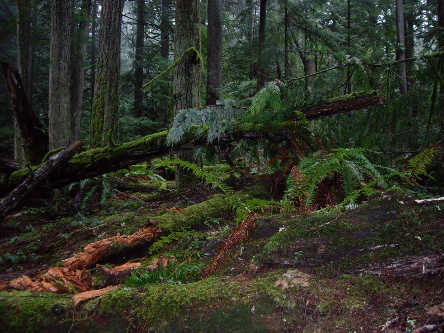 A Picture of the Village

Here’s an aerial photo from the website www.geoportail.fr – Google Earth shows some villages in in detail, but Bize Minervois is not in one of the detailed areas, and only shows up as a blur. 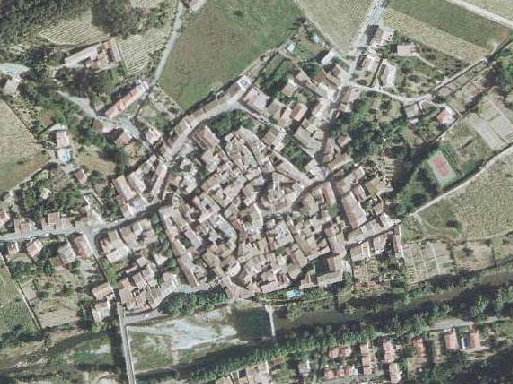 Sunday, we decided to take a bit of time out from the unpacking and house things. The weather is gorgeous and we decide to head up through to the and visit the Sunday market in Saint Chinian. Today’s is apparently a special one – the Christmas market.
I decide to take a back road out of Bize and visit a few villages on the way that I’ve not been to before. The countryside is beautiful – there are big ridges of limestone and craggy hills just on the outskirts of the village that I didn’t know existed. Some of the grape vines still have yellow leaves on them, and have yet to be pruned. Lots of forest.
And we come across a group of men at the side of the road in bright yellow safety jackets – carrying rifles. Yes it’s hunting season and there’s a few dogs in a big cage on the back of a trailer. I believe they’re used if a wild boar is found.
Saint Chinian is a lovely village – well, small town really – and the market is lovely. We have a coffee and a snack, and decide to come back to get fresh oysters for lunch (for Janice, not me) and go exploring further afield in the meantime.
We end up on a fairly narrow mountain road, climbing higher and higher, and the views over the countryside are amazing. In the distance the sea near can be seen. Mild weather and clear blue skies.
Lunch back at the house, the rest of the afternoon sorting more rubbish and trips to the recycling bins around the village. Janice has taken that task upon herself and knows where everything goes. I think my newspaper contribution alone has probably filled up the whole bin and I’m not sure when it’s collected.
A last check of all the windows and shutters (interestingly, every set of shutters on each of the eight windows has a different closing/locking mechanism), and an early night.
Alarms set for for the drive through to for a flight to Gatwick, bus to Heathrow, then a flight to . And Christmas with the family.
at December 11, 2006

Drove to Susie’s house at 9.30 to head off to . The plans in the meantime had become more complicated. Apparently 2 years ago, Bruce had given her a soft-top VW for her birthday – one that needed a ‘bit of work’. It was still sitting at the mechanic shop – a whole lot of problems had ensued apparently, and there were disagreements over this and that. A bit of a nightmare apparently. Well Susie had decided that she was going to take it out of there, and drive it to someone she knew in who was more reliable. She was unsure of whether it would make the journey. Could we travel in tandem? She was taking a tow-rope and had I ever towed a car?? I said ‘no’, definitely not. So the tow rope went in my boot, Bruce was put on standby to come to help if a tow was needed, and we went to the garage. Not surprisingly, it wasn’t ready to drive – something needed to be done to ‘make it start’ and the guy who could do that wasn’t there. I’m not sure where this story is heading, but I think it has some way to go…
So we head to , meet Abdel the car salesman who is very pleasant and helpful. It’s beginning to rain but we look at a few in the car yard. I had already decided I wanted an automatic Renault, a Peugeot or Citroen in any colour but grey – and definitely diesel.
What I bought and will pick up on 9th January (when the damage to the door and rear end and bumper has been fixed) is a manual Suzuki wagon, colour grey – and definitely petrol. Nearly 3 years old, 29,000 kilometres on the clock and one not-so-careful owner.
So after lunch with Susie and Bruce and their son Lucas, a bit of shopping, it’s back to the house to continue unpacking. I try to ring Pascale, using the number Msr has given me. It’s a wrong number. I try the mobile, and go through to the voice mail, and leave a message in French that I doubt will be understood.
I also need to go the Maire’s office to get a Certificate of Domicile, which I need to then fax through to the Abdel at the car yard so he can arrange for the paperwork to be completed. I wasn’t able to make myself understood completely to the very helpful woman behind the desk – in desperation she got her mobile phone and rang her daughter – who spoke very good English, handed me the phone and I explained what I needed. Voila. Problem solved, and out came a small pad of tear-off forms which said I was a resident of the village (I had to produce my passport and paperwork from French Telecom as proof). How is that for service!
This Certificate was more important in more ways than one. Apparently I needed it to produce to get my rubbish tip card.
at December 11, 2006

The Keys to the House

OK so I’m sitting here at Gatwick Airport typing on my laptop.... 6.10am flight out of Glasgow, with connecting flight to Toulouse not until 3pm – arrival 6.40, then a 2 ½ hour drive to destination. So a long day. Janice my friend from London fortunately is able to join me on this trip down – so that is taking some of the pressure off – especially getting into Toulouse when it’s late and dark, and then navigating out of the city in the hire car. And a helping hand to unpack all my worldly goods, should they arrive in the removal van on Thursday as planned!

The removal van arrived early last Wednesday – stress levels gearing up for this move are not unexpected – sky high. I will be so relieved when I’m sitting in the house, surrounded by boxes, and whipping the cork out of a bottle of red. A positive side of the moving out day was that the two removal men were real gems – it’s a Welsh company that I’m using – so I had two strong Welshman doing a great job of loading my gear, only stopping long enough for a few cuppas and Scotch pies, pasties and sticky buns I’d got from the bakery down the road. And it is the same two that will be arriving on my doorstep in France in a few days. So I’ll make sure there’s some pastries ready, together with whatever the French equivalent of a Scotch pie is.

Hopefully that will happen this Thursday – though there’s no guarantee at this stage that it will. A small matter of a hiccup with the finance arriving from the currency dealer here in the UK into the Notaire’s account in France – nothing major there of course – just the funds to pay for the house! I’m waiting for a phone call here at the airport from Susie Walters who is dealing with the paperwork for me. Worst case scenario I guess is that it’s delayed for a day or two. Hopefully by Thursday – I’m not sure what I’ll do with all the furniture if I don’t have the keys to the house.

After the formalities, Susie wants us to have lunch then head straight off to Carcassonne to look for cars. She knows several English speaking dealers and I’m hoping to have found one before I head to Canada for Christmas on the 11th December. As I have a hire car for the next week, I’m hoping to just pick up the car from the dealer when I arrive back on the 6th January.

So, three night’s accommodation (in the same place that Nic and I stayed at in September) and then into the house. Assuming all goes according to plan, it’s signing of all the paperwork on Tuesday at 11am – a very formal affair with all parties present – the two owners with their Notaire, me with my Notaire, Susie and Bruce, and also an official interpreter who will interpret every word to me to satisfy all the legal requirements. Susie and Bruce are fluent, but they recommended I should get an accredited interpreter to be sure that everything’s done by the book – so important in France of course!