But come the weekend – a day off was what was needed. And surprise surprise – there just happened to be a festival on! At – 25 minutes from here. So – a friend who lives here in Bize - and I decided to go for a trip through there on Saturday.

And what a gorgeous day it was – weather was perfect, there weren’t huge crowds as it was a three day festival and it’s not yet the height of the tourist season, and the atmosphere was really good. 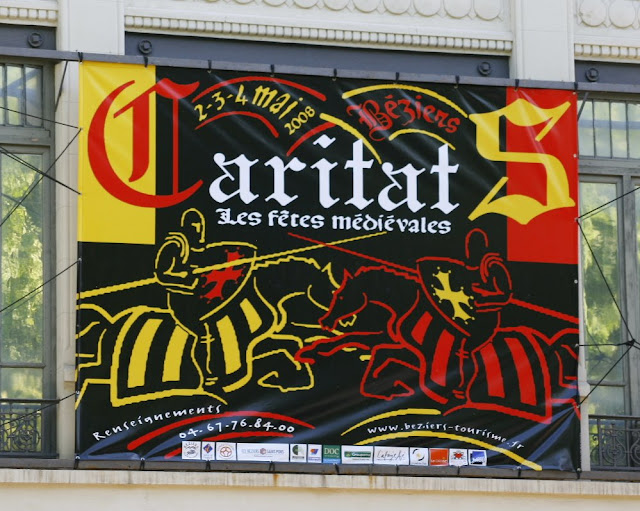 The Caritats Festival was the fourth that Béziers has held, and I think it will be one that gets bigger and bigger each year.

The main part – food and handicraft stalls, demonstrations of medieval crafts, etc – was set up down the centre of town – the Allees Paul Riquet which is the centre of (think small Ramblas/Barcelona).
It’s lined with beautiful plane trees and shops and bars, cafes and restaurants along both sides. It’s named after Paul Riquet who is Beziers ' most famous son - in the late 17th Century he engineered the 240km Canal Dui Midi, which runs from Sete to Toulouse. 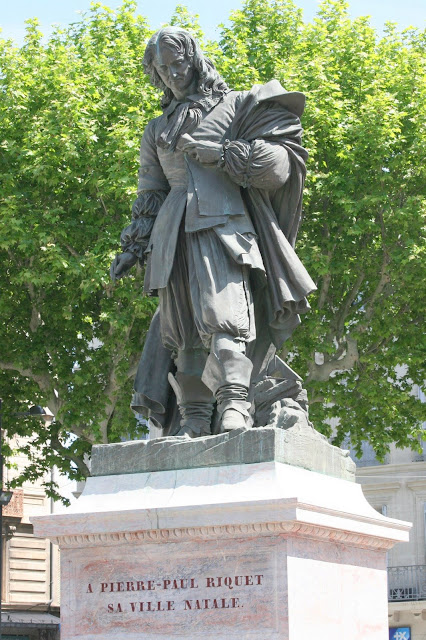 To start the day’s celebrations, a parade took place up the Allees:


Off to the side was the arena for the ‘action’ – the chevaliers on horseback, jousting, arm-to-arm combat, a demonstration of birds of prey, and archery. And we got a ring side view of the action: 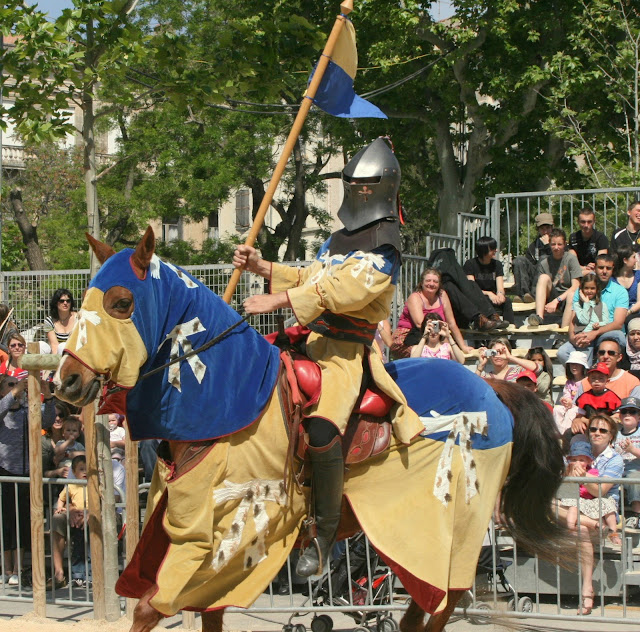 The archery demonstration was interesting. To start, there was the usual firing at the target. But then one of the ‘medieval wenches’ came out with a model bear under her arm – this was positioned under the target and promptly peppered with arrows – much to the delight of the crowd! 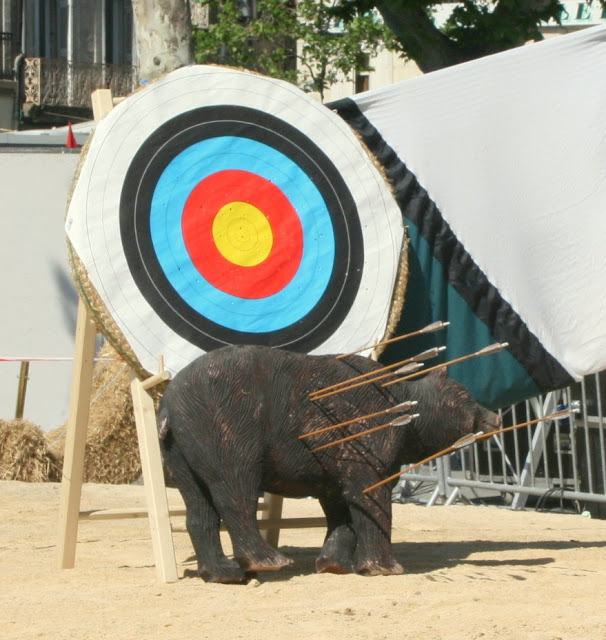 And a few more snaps of the day (and thanks to Miki for these photos - I was struggling with the video side of things, and a battery going flat.....) -
One of the artisans - a medieval hat-maker,
who was delighted to have his photo taken - just so long
as he could take his glasses off first! 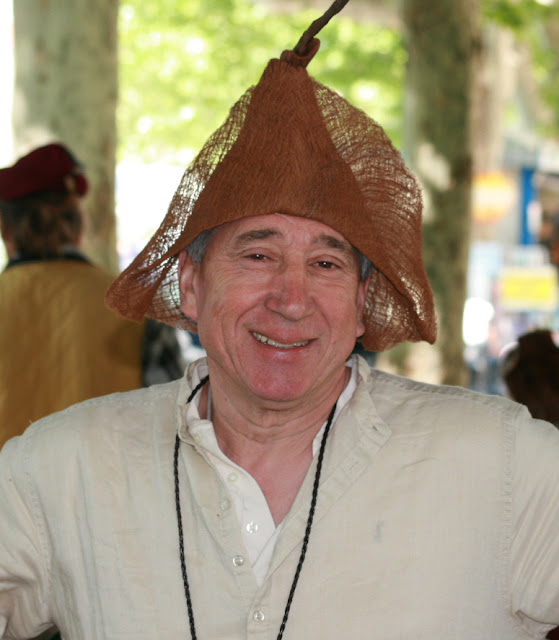 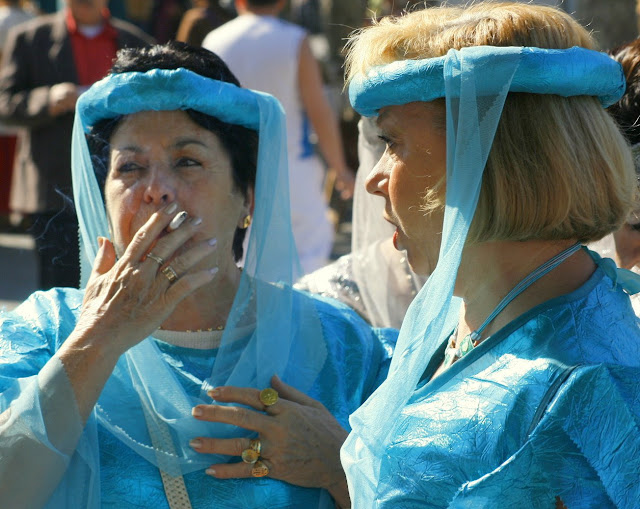 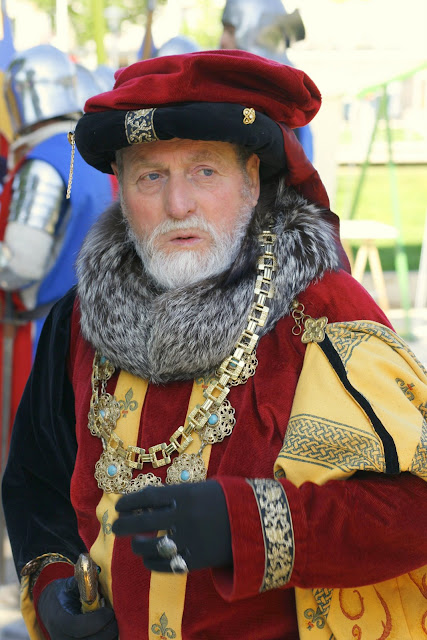 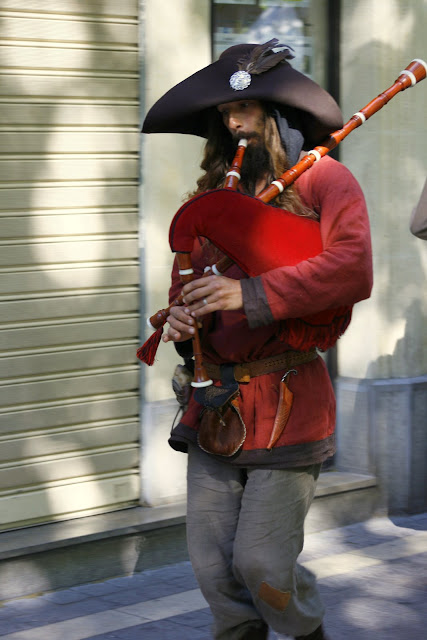 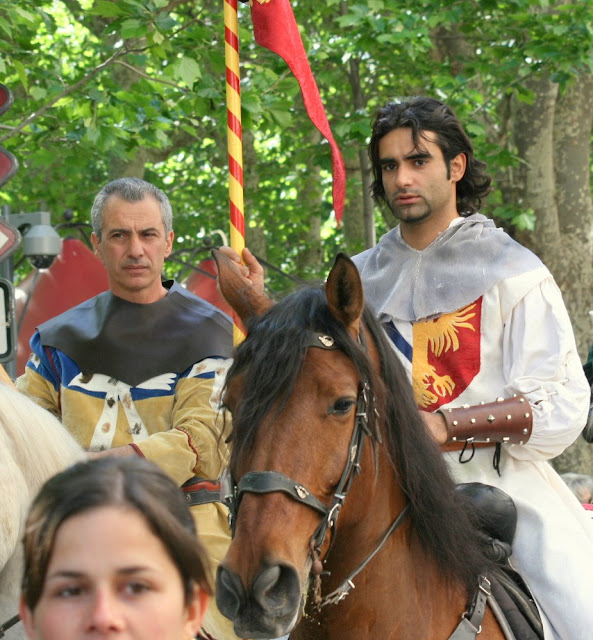 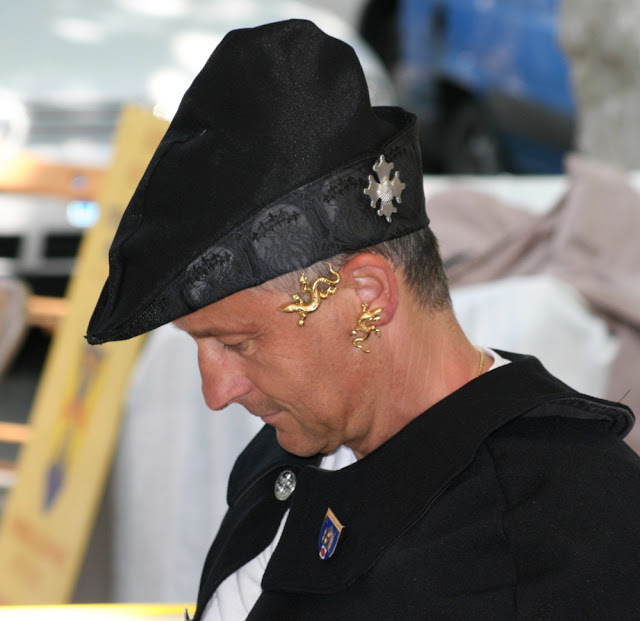 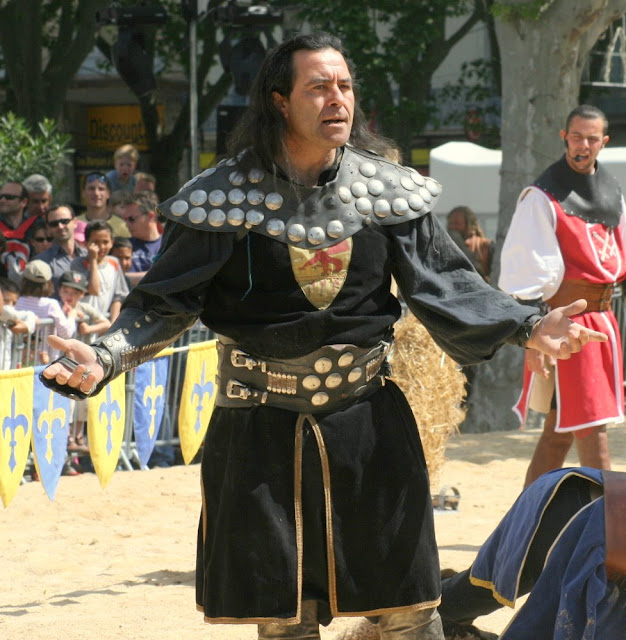 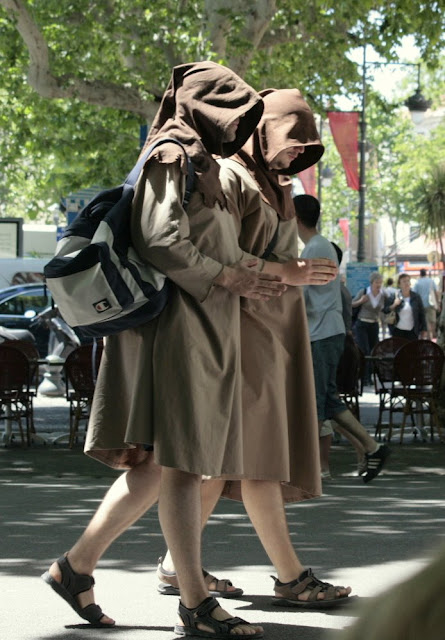 So, a good day was had by all.
But perhaps not for the ‘errant’ cats of …………
who appear to have a date with destiny 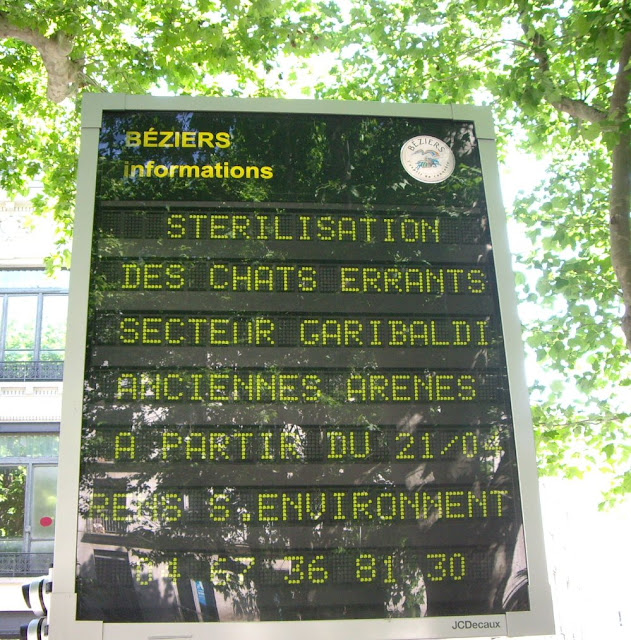 And then a very pleasant lunch sitting out under the trees, listening to the Claymor Clan playing the bagpipes.

On the road to , just before Capestang – there is a field of poppies amongst the vines. They’re everywhere - all over the fields and roadsides, and they’re at their best just now.

These were growing in a thin strip of land where previously there had been vines and looked just gorgeous.

Standing on one side of the road, looking through the plane trees to the vines and poppies – and the row of trees in the background are more plane trees that are lining the Canal du Midi. 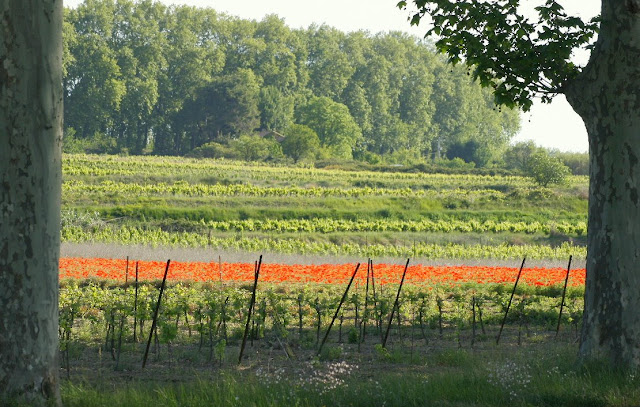 Guess that says it all really – that’s what’s been happening this last week or so. Walls, ceilings, staircase, doors and door frames. I swore many years ago that I would never do any more painting of houses. Famous last words – I think I’ve painted just about every place I’ve lived in since! It just isn’t one of my favourite jobs – let me loose in the garden any day.
I was actually feeling more than a little daunted about what was ahead of me – but a saviour in the form of my friend Caroline, from the – came to my rescue. She kindly offered to come over and give me a hand and reckoned if we gave it ‘what for’, we’d break the back of it. What a star – she helped me every single day for a week – and we certainly got a whole lot done. Set up the old boom-box on an extension lead from the garage, played lots of music I hadn't heard for a long time and painted our hearts out. A great moral boost – merci mille fois to Caroline who helped me when I was feeling a little down.
So, all going well – I should be moving in within two or three weeks. Electricity has just been connected – I need to contact French Telecom to sort out the phone line.
Any day soon, plumbing will be complete and there will be water. Perhaps a couple of weeks is optimistic – but I don’t have far to move! And no rush as my first house rental isn't for a few months. 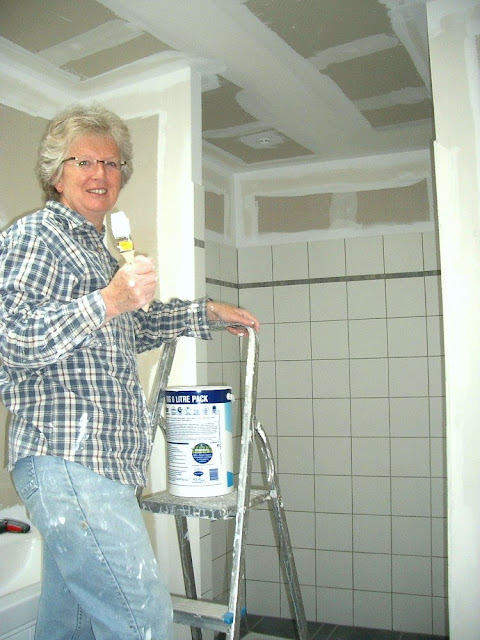 I don’t really have any different pictures of progress at the moment. The only difference since my last post is that the cardboard-coloured plasterboard seen in the photo above is now white. Well, actually I wish that was true – unfortunately it’s looking like most of the walls will need a third coat of white paint. Oh joy…
at May 05, 2008 1 comment: