Yesterday I was coming back from Narbonne quite late and it was pitch black. I was about 5kms from Bize when something ran across the road in front of me – I had oncoming traffic and couldn’t avoid it. It looked like a small-ish dog, and unfortunately I hit it full-on.

I turned around when I could and went back to see that it wasn’t just injured, and had a quick look from the car. I couldn’t see very well from my side, but I had June in the car with me who said it was definitely dead, and that it was probably a small wild pig (sanglier). There are plenty of them around this area and they’re a real prize for the hunters.

As sad as it was, I figured that someone in the village would be delighted with the sanglier, so phoned to ask Duff to come back with me to collect it! I picked him up and we headed back, armed with a black plastic bag.

Pulled off to the side of the road, hazard lights on, and discovered it wasn’t a pig at all. It was a hare! The poor thing wasn’t too damaged at all, but appeared to have died instantly. It broke the bumper on my car – I certainly hit it full on and he didn’t stand a chance. And he was huge! I have never even seen a hare (un lièvre) – dead or alive - but I know they’re highly sought after by the hunters too.

So the plan was to offer it to my elderly neighbour, who often goes out hunting with his old dog. I’ve seen him come home with the odd pheasant, and take it inside for his wife to clean (I know this is how it works now!). And so we did offer it to him – he came into the garage to see it, and was very happy indeed to take it off my hands.

Now, unfortunately that wasn’t the end of the story. Ten minutes later, he was back with a few ‘désolées’ – and returned the hare.

Madame said it was too much work to clean it, and obviously cleaning wasn’t in his remit. His work apparently starts and finishes at the hunting stage! I know he was genuinely ‘désolé’. He’d been telling us the different ways he could cook it – roasted or casseroled – both delicious he said.

Next, I rang Claude and Ellyette – Claude’s sister who also lives in the village was visiting, and yes she would love it. So five minutes later, I had a very happy Rosemarie drop by and take it off my hands…..

And so mercifully we were spared the next option: having a go at cleaning it for ourselves – not something I was looking forward to! 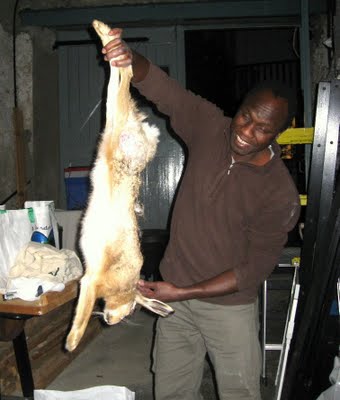 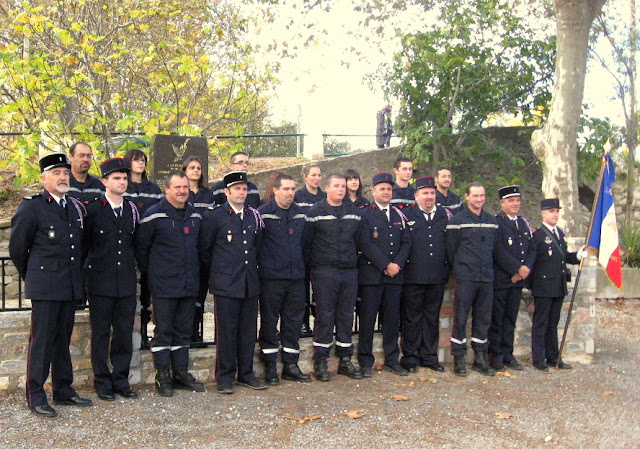 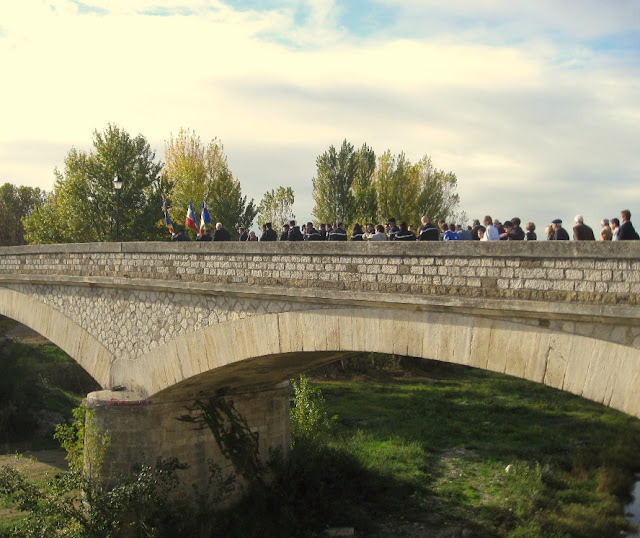 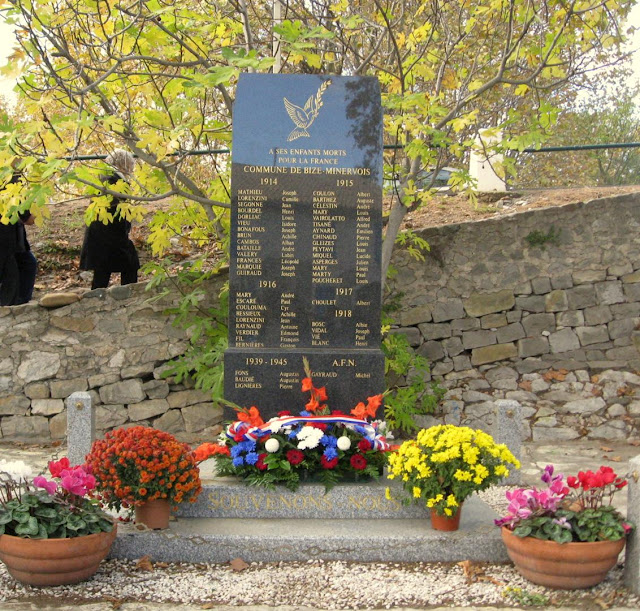 Two things that are in abundance just now. And while there may not be any mushroom festivals in the immediate area (that I’ve heard of, though I suspect that there very likely are!) - there are two chestnut festivals in the region held at this time of year. One is held in St Pons de Thomières and the other in Olargues.

The one in St Pons is called la fête de la Châtaigne and the one in Olargues is called Fête du marron.

Marron and châtaigne are both words for ‘chestnut’ and it was a bit confusing asking the vendors the difference. There was a rather convoluted conversation (of which I understood not a lot!) about the trees being grafted ….

However, I’ve since found out that although they are both types of chestnut trees, the main difference is that marroniers are cultivated chestnut trees, and châtaigniers are the wild variety. There is also a difference in the fruit - the prickly ‘shell’ of the marron usually contains only one ‘nut’ while the châtaigne normally has several.

Oh, and speaking of Christmas, Paul my son is coming over from Perth in December for a couple of weeks – it will be the first time that we’ve had a family Christmas (i.e. with Nic and family) since February 2003 when Steve and I went over to Canada for ‘Christmas in February’ and Paul joined us there.

We’re a fairly unconventional family as far as Christmas is concerned – not too worried about the actual day – but we do like the turkey thing. Last year I spent Christmas day at Singapore Airport on my way back to Perth – but managed to have a celebration of sorts with the family here on the 22nd, and then again with Paul back in Perth several days after my arrival.

But the turkey - this year we’ll be having a free-range one on order from a little organic veggie garden (he raises a few chickens, ducks and geese as well).

Nic ordered it the other week, and beyond saying it was for 7 to 8 people, and asking for one that was ‘grosse’, we really don’t know how big it’s going to be. Nic said the eyebrows of the farmer shot up, so we’re thinking ‘big’.

However, I digress. Chestnuts. So the festival at Olargues ran for both days of the weekend, and I was there on the Sunday.

It’s a gorgeous little village and is rightly designated as one of the most beautiful villages in France (Les Plus Beaux Villages de France).

Bize-Minervois is not on this list (yet! – do we want to be?), but Minerve which is just up the road, is.

I digress again – here’s a short video clip of Olargues on the day – a little stall set up outside a quirky little shop – I’m not sure what it was selling! Though I see behind the piano there are wine cartons, so I suspect that perhaps is what they sell. Maybe stuffed animals too? 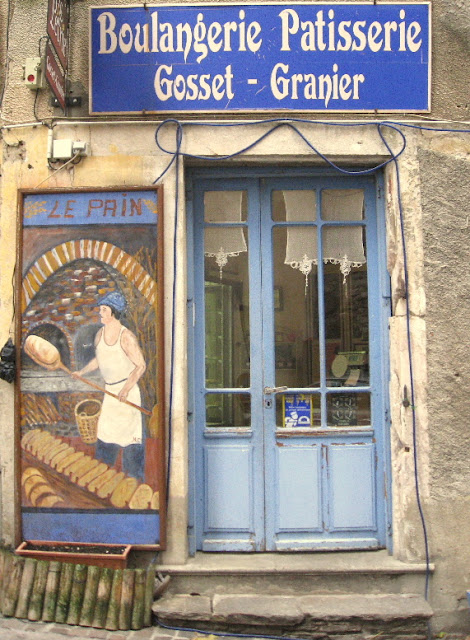 And then the other week, there was the annual new wine/chestunut walk with the regular group. Nic and Elizabeth and I had planned only to go for the walk – busy with other things and didn’t think we would make the picnic lunch. We had [wrongly] assumed that the annual event of roasting of the chestnuts and tasting the first of the new season’s wine would be part of the lunch. I have been to this the previous two years, but had obviously forgotten the order of the day!

So we turned up at 2pm, went for the walk with the group, and were pleasantly surprised that the lunch event and chestnuts/wine were separate – i.e. the chestnuts and the wine were after the walk! How very civilized, and what a nice surprise.

There are different types of chestnut roasters available, the bigger of them being custom-made cages. Someone here however has been very resourceful and used the inside of an old washing machine. Worked a treat. The chestnuts were delicious, and the first of the 2009 new wine (a 100% cabernet sauvignon from the Argeliers Cooperative) was very good indeed.

At the walk last week, only a few kilometres from Bize, there was an abundance of mushrooms growing all along the side of the paths, under the pines. There were a couple of Australians on the walk (visiting an Australian couple who live in the nearby village of Mailhac) who collected quite a few, once they had been reassured by the locals that they weren’t poisonous.

Here in France you can take mushrooms to the pharmacy to be checked before eating them. I’m sure this has saved many lives.

Interesting though, despite Claude’s delight with this monster …. 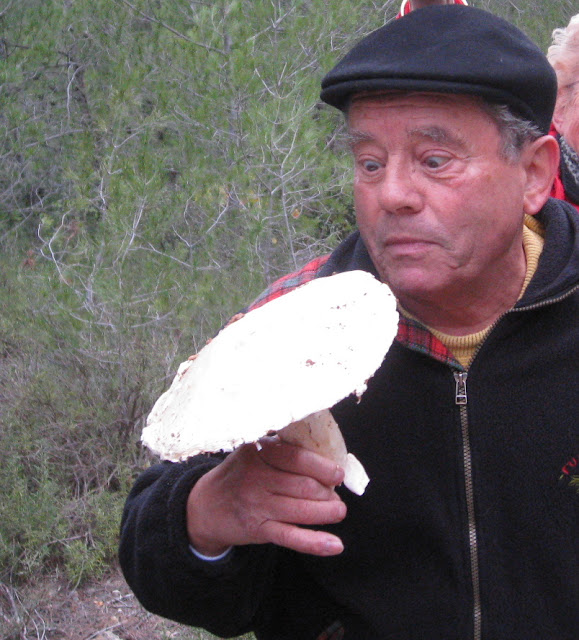 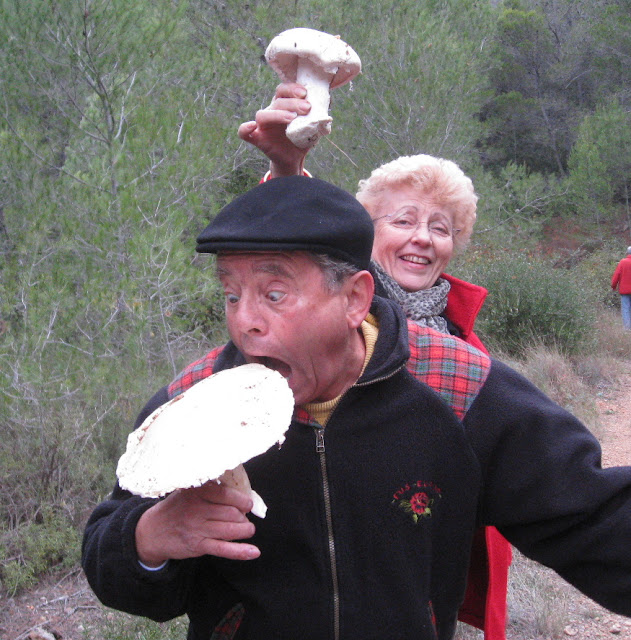 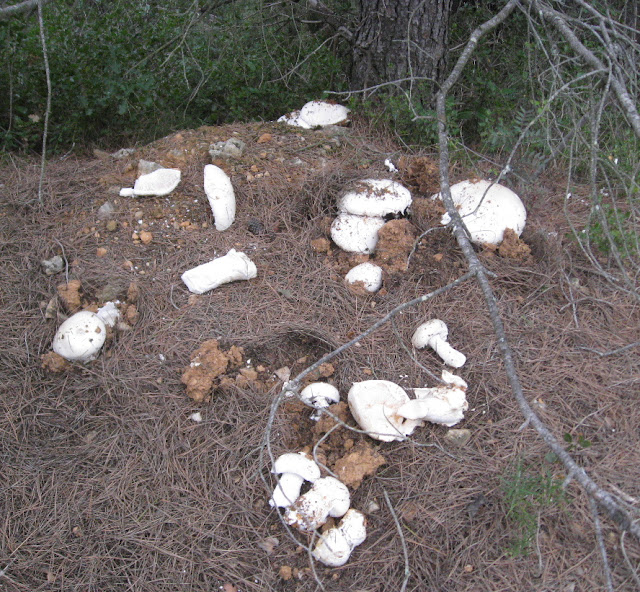 …. the locals didn’t collect any of these, even though they are edible and were everywhere. Apparently they’re just so-so, and they have their favourites, the best they tell me are the ceps.

And they’re not about to tell me where to find them. Claude does tell me however when they’ve found some, and just how delicious they were!


Perhaps I’ll feel like I’ve really ‘made it’ here if I ever get invited on a mushroom picking expedition! Guess I’ll just have to buy them from the markets for now.

And just to finish off, some gorgeous autumn colours of the vines around Bize. 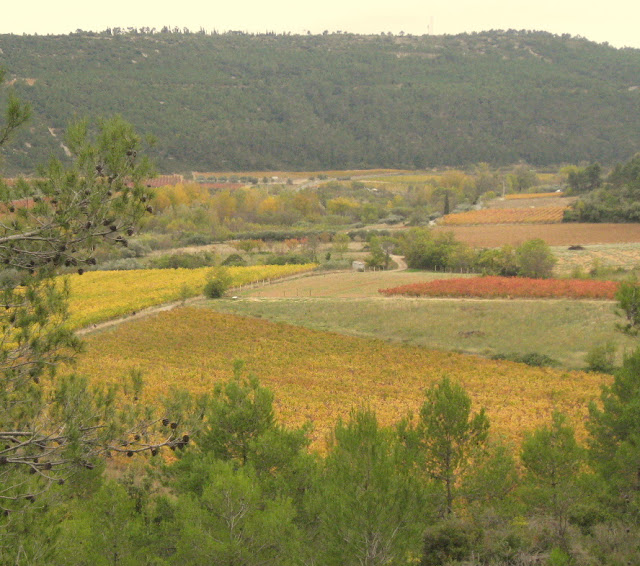 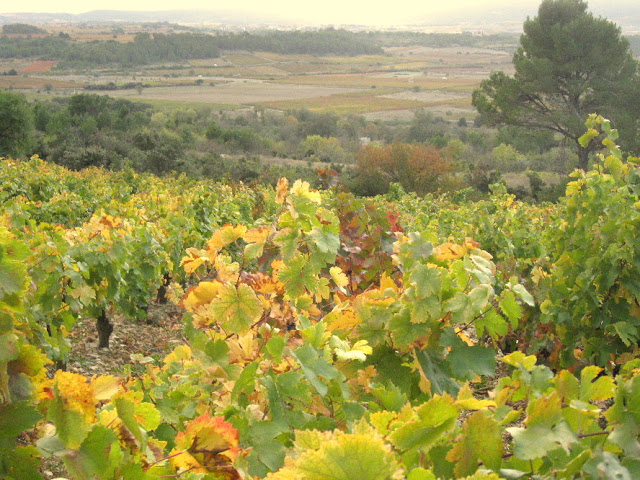