Cooking classes in the village

Samira – a friend in the village – recently began running Moroccan cooking classes. And so a couple of weeks ago Caroline and Bonnie and me were her first clients. She has a website underway that she will be adding to – here. 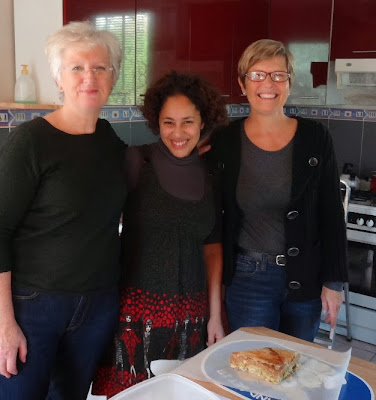 And a bit about Samira from her own website – the English translation:

Hello, my name is Samira, I live in France near Ginestas, near Narbonne. I was born in Morocco, in Rabat, where I lived for 38 years.

I learned to cook with my mom at the age of six years. The kitchen is a tradition in Morocco and is the preserve of women. Many believe that one of the best cuisines in the world with French cuisine.

Moroccan cuisine is balanced and varied, based on vegetables, it differs from those of the Maghreb, our couscous and tagines we are different, softer and sweeter.

The virtues of mint tea, made from green tea, are well established, it is an excellent drink for health through anti-oxidants it contains and its effects on cell aging. We drink several times a day with homemade pastries, delicious and little known in France.

Three classes – one a week – and the dishes we cooked were a lamb tagine, a pastille and couscous and vegetables. Sadly, I forgot to take photos at the first class - the tagine.

How interesting was it to see these dishes cooked traditionally and by someone who is such a good cook! Taught by her mother, Samira tells us.

The couscous was no 5-minute instant job – it was moistened with water and olive oil, rubbed to a crumbly mixture and steamed above the vegetables for a while - took a good hour from go to whoa.

Then tipped out into a huge bowl, more tepid water added and steamed again. This was repeated quite a few times over perhaps an hour until it was the right consistency. And just so delicious and different from the 5-minute couscous I use at home. Light, fluffy and with the flavours of the olive oil and the steam from the vegetables.

The pastilla is a traditional and well-known Moroccan dish. It’s a pie (normally made from pigeon but often now of chicken).

Wrapped in layers of phyllo pastry (or here in France it’s easier to get feuilles de brick – not as fine as phyllo), the pie consists of a layer of the cooked chicken meat, followed by a sort of sauce thickened with eggs, using the juice and vegetables from the chicken pot, and finally followed by a layer of ground toasted almonds, sugar and cinnamon.

And while it may sound a bit of an odd combination, I must say that it’s amazing.

Thanks Samira – a very enjoyable experience with some delicious food we got to take home!
at December 23, 2011 No comments:

....and the streets were running with …. 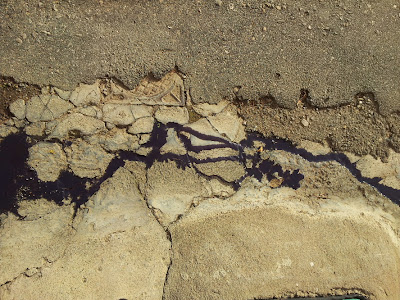 Coming back to home yesterday at midday, this was at my front door. Either the winemaker up the hill had had ‘une petite catastrophe’ or he’d been cleaning out the vats!