It seems ages since like my last post. I was about to say that not a lot’s happened, but looking back I guess it has.

Halloween was celebrated last week in the village, in a small way. A few of the kids from the village got dressed up and did the trick-or-treat thing.

And Indigo and Sage had packed their costumes from Canada – and they certainly came in handy! Most of the kids we came across were recognisable – not so these two…. 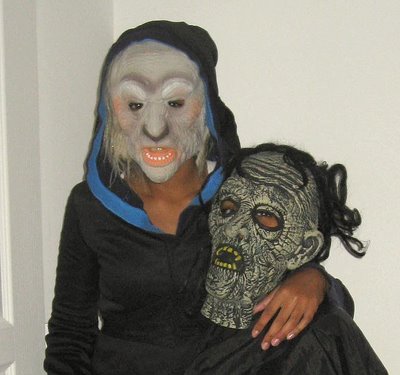 Apparently it was never celebrated like this in France until recent years – I guess time will tell if it will become very popular or not. It’s always been celebrated as All Saint's Day (la Toussaint) – with families visiting cemetaries and adorning the graves with chrysanthemums. Leading up to this, all the garden centres and shops are full of chrysanthemums – a real picture.

Fortunately I’ve learned since I’ve been here that it’s not appropriate to give someone a potted chrysanthemum as a gift as they’re considered flowers for the dead.

We had a lovely meal the other night of trout – they were on special in Intermarche for €4.50 per kilo, so to buy four of them was really economical.

So I decided to do them wrapped in wet paper and baked in the oven (thanks for the cooking tip, Sandra – it worked a treat!). The kids were a little undecided with the preparation side of things ……
But more than delighted with the outcome …… 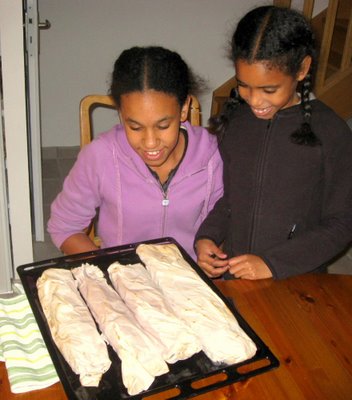 A definite thumbs up from Sage… 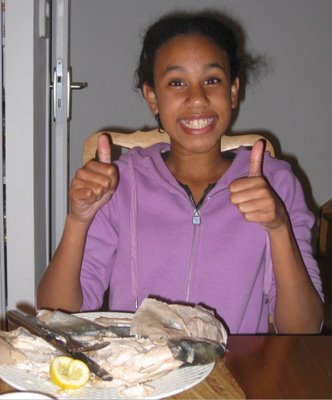 And Indigo? well, a picture's worth a thousand words …. 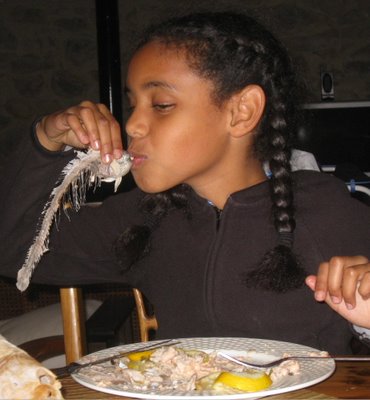 An update on the fishpond - previously the bath tub! 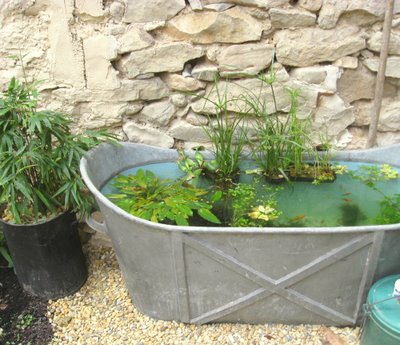 It’s taken a bit of time, but finally it’s up and running and is looking really good, even if I do say so myself! It took me a long time to find out the best way of treating (or not) the inside of the tub as the general consensus was that it was zinc, and probably not good for the fish long-term. 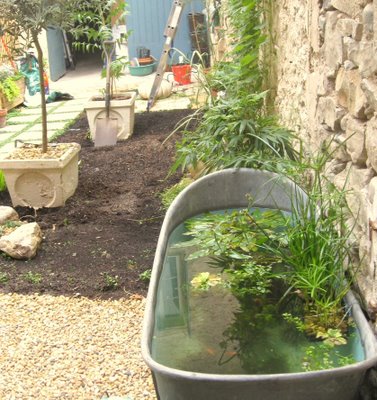 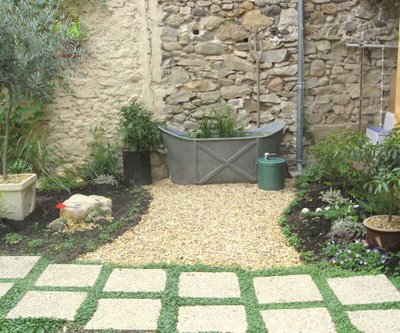 And then it proved difficult to source a sealant – I finally ended up with a pool and pond paint that was non-toxic to fish. It only came in white or a rather bright shade of blue – I chose blue in the hope that it would turn green with algae soon, and look a little more natural. And that is beginning to happen.
To be sure it wasn’t toxic, in the short term we put in a few little fish (sacrificial lambs) which the kids had great fun catching from the river - ten in all. And they not only survived – they thrived.

After a week or so of them never having looked back, we bought five goldfish – one for each of us. Me, Nic, Indigo, Sage and one for Col & Hass who were here at the time.

So then it was back into the river for the little native fish – I reckon they would have been just as happy to stay!

We’ve had so much fun collecting the plants from the river. Paddling in the shallows with our trousers rolled up (in a very secluded section of the river, I must add), with plastic carry-bags and getting very wet!

Most of them are doing well – time will tell whether they survive the winter, but so far so good.However, the plan was to see if I could get the whole system biologically stable and not have to use a filter. I did have success with my pond in Perth like that, but it didn’t appear I was going to be successful with this one.

So I’ve installed an external biological filter, which has cleared up the cloudiness in the water in no time at all, and this will also allow me to keep a few more fish.

We had some amazing rain last week – it bucketed down. I had to bail out the fish pond twice in one day as it was overflowing, and there’s a good 3 centimetres between the level of the water and the top of the pond. So a fair bit came down that day.

Unfortunately it also revealed a few more leaks in the old roof of the house, which I need to get seen to.

And the next day, the River Cesse was a far cry from the beautiful clear water we’re used to – so much soil must have washed down from the vineyards. Even now, a week later, it’s not yet running clear.

Before (a summer photo): 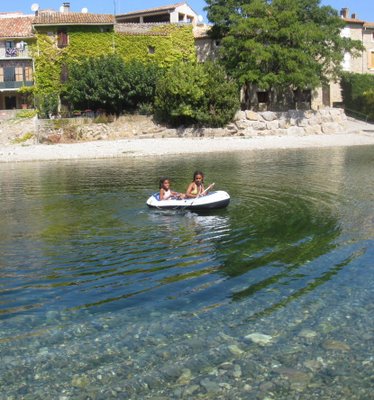 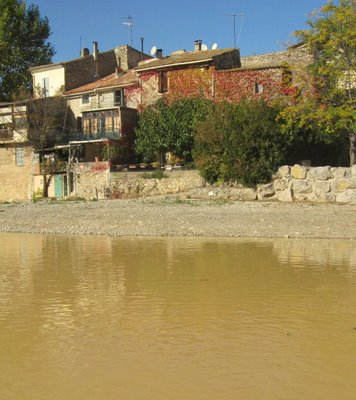 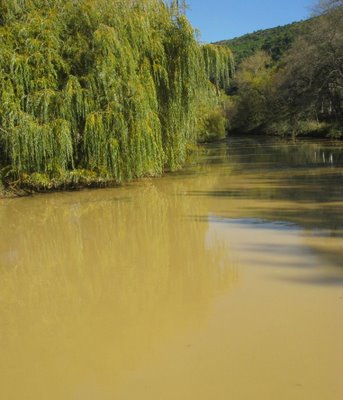 I’ve also had some more visitors – it was beaut to have my brother-in-law Phil and sister-in-law Val from Somerset stay for a week. 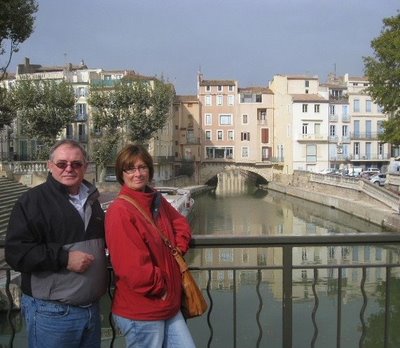 Fortunately we had two days of really beautiful weather with the remainder just so-so. However, it is November, and totally to be expected.

We ate out a few times – memorably at a lovely seafood restaurant when the weather was divine, in Bouzigues on the Etang de Thau, overlooking the oyster beds. But mostly we cooked up a storm at home, drank some very nice wines and generally caught up.

And the countryside is spectacular at this time of year, so we certainly got to see some lovely sights when we were out and about. 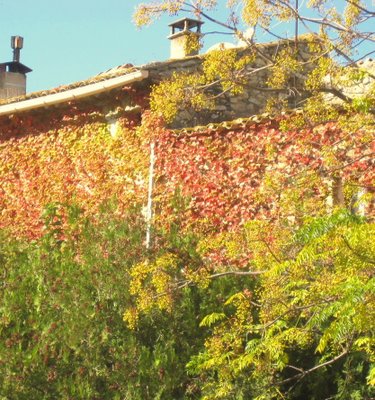 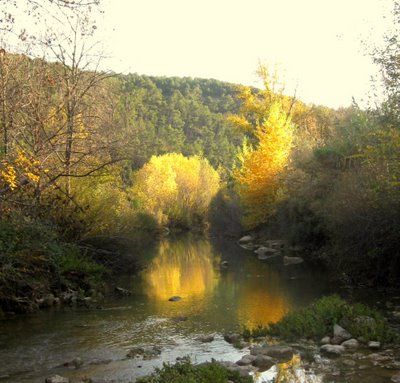 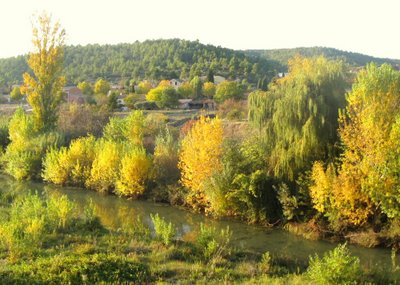 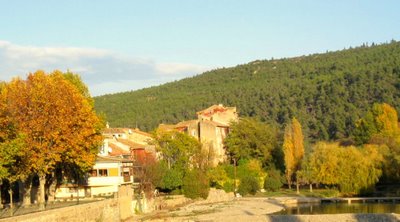