And it’s that time of year again. This year, I’ve been a little more involved, in that I’ve been helping with making of the paper flowers for the float!

Every Wednesday afternoon, a group of us got together and with the help of nifty home-made contraptions of wood and wire, assembled thousands of paper mâché flowers. 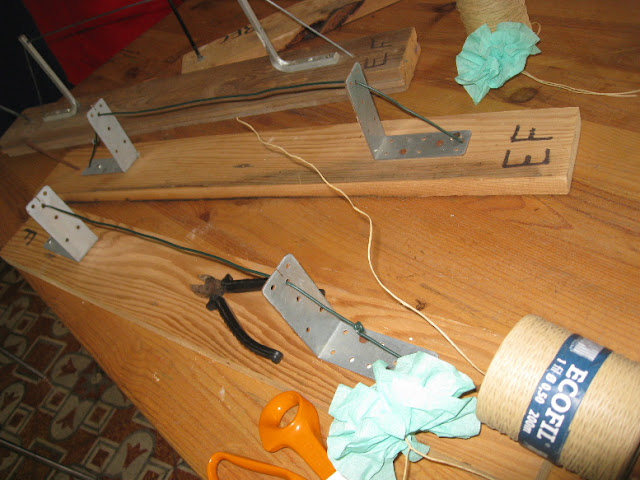 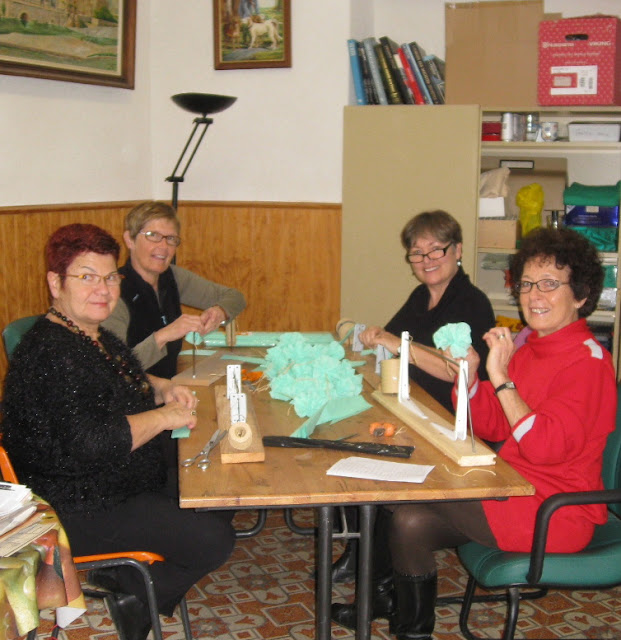 The men were in charge of constructing and decorating the float in Jacque’s barn, and periodically called by to collect the plastic bags full of flowers.

Bonnie and I also spent several afternoons at my place, sewing like crazy, getting our costumes ready.

Bonnie brought her sewing machine and was well in control of that side of things. I was pretty much on the end of the iron and a bit of hand stitching! I’m not so good with a needle and thread, so let’s just say parts of my costume were pretty rough – dare I say even done up in places with the odd safety pin …..

This year, our group’s theme was the traditional costumes of some of the regions of France. I got to be ‘La Normande’ – from Normandy. One of the women’s daughters used to be an avid collector of costumed dolls, and she has kept them. So out came a huge box of dolls in various costumes, and this was my remit. 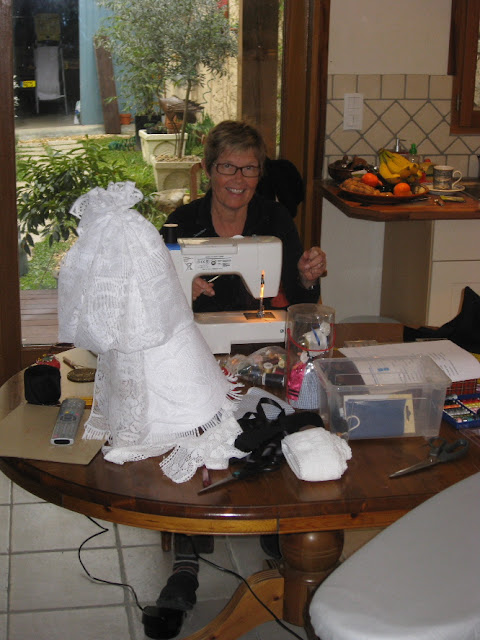 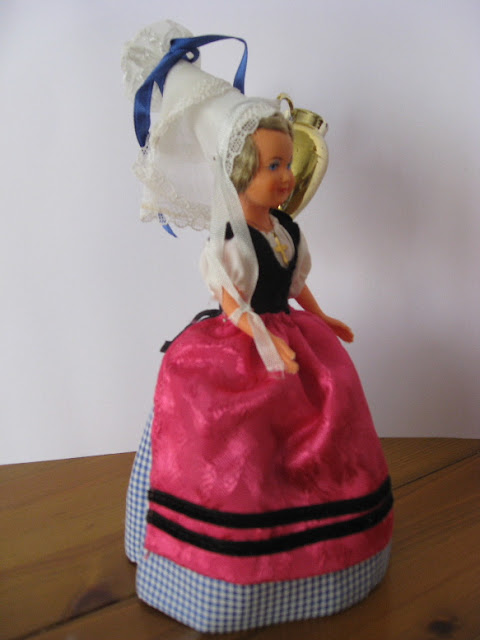 And despite my best efforts to replicate the outfit, this is the finished product. Thank goodness for masks and big hats, I say. Not everyone knew it was me! 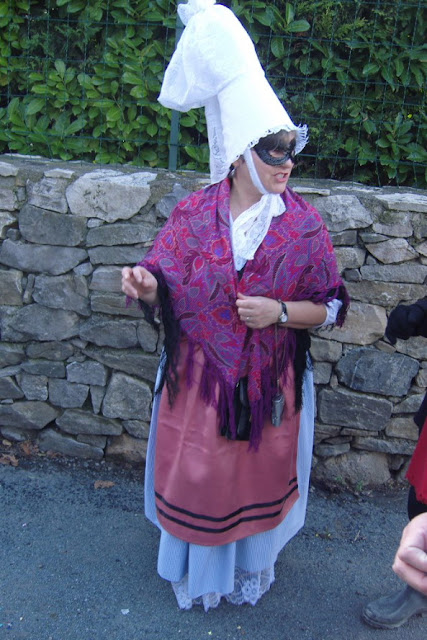 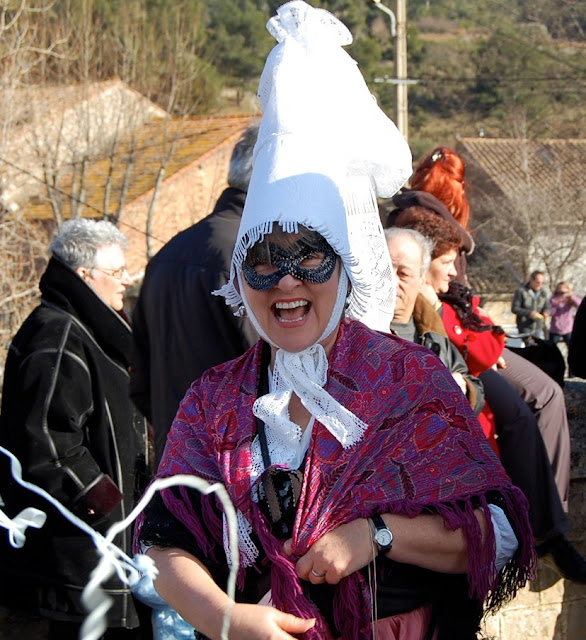 And a few more photos of the parade: 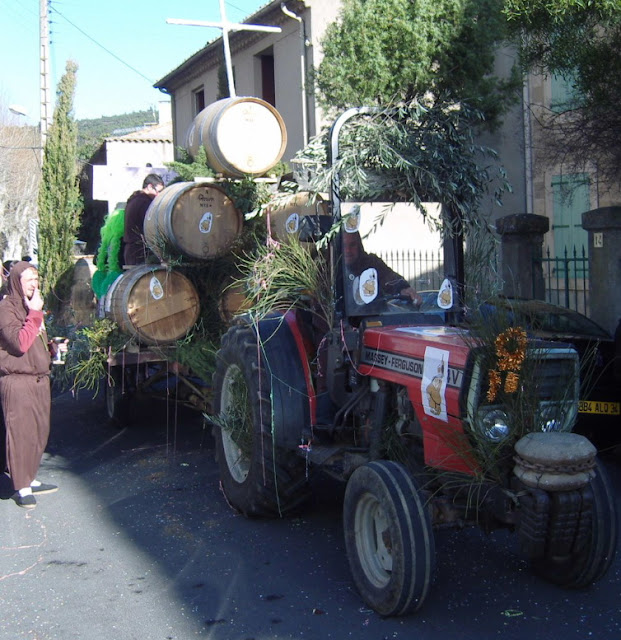 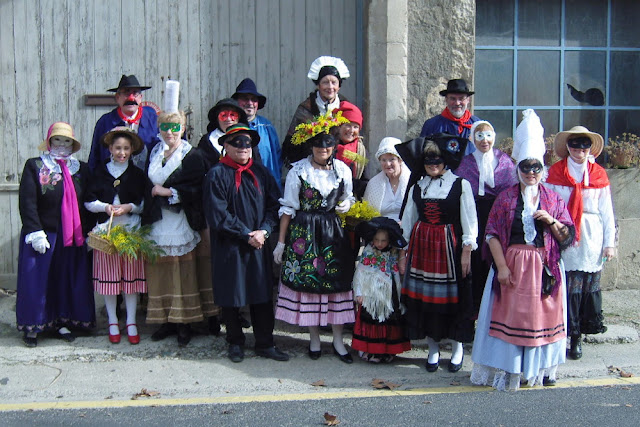 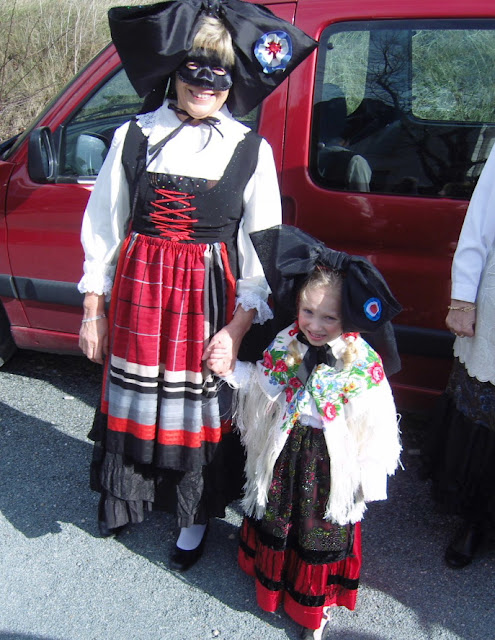 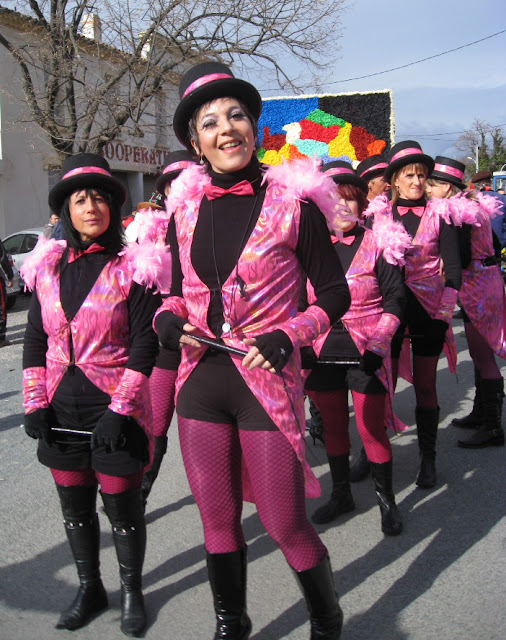 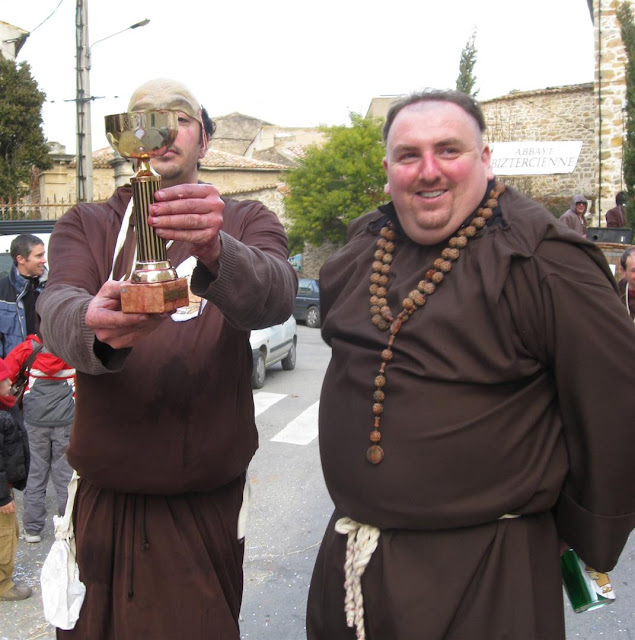 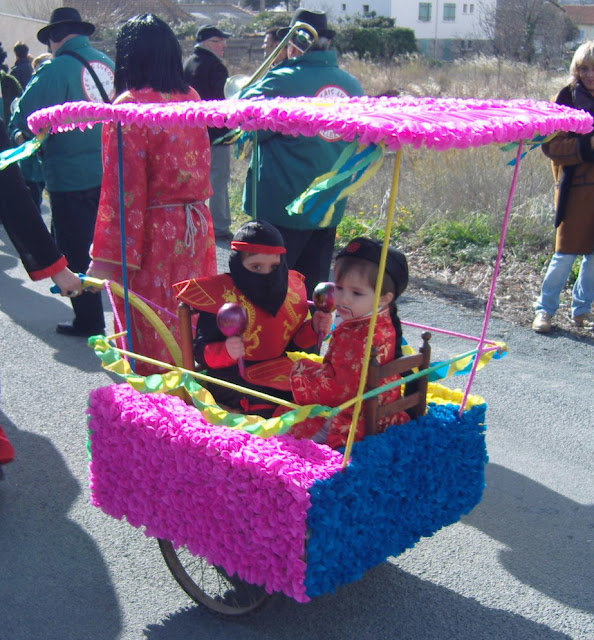 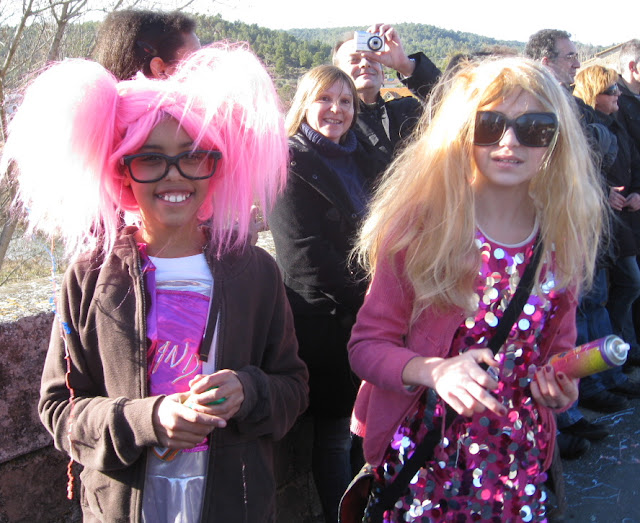 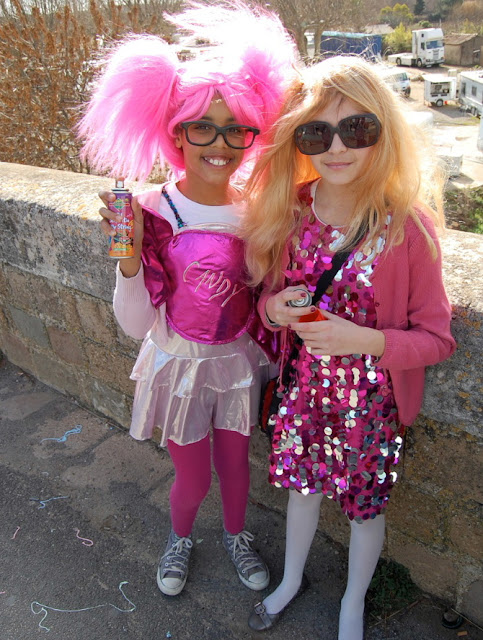 Our float - showing departments of France
the result of our paper-flower-making..... 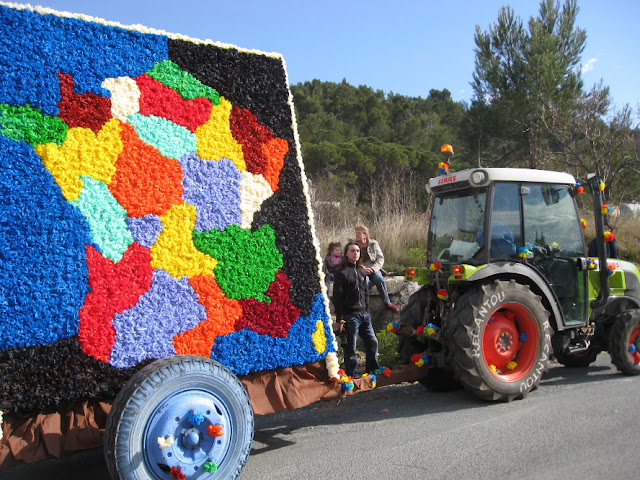 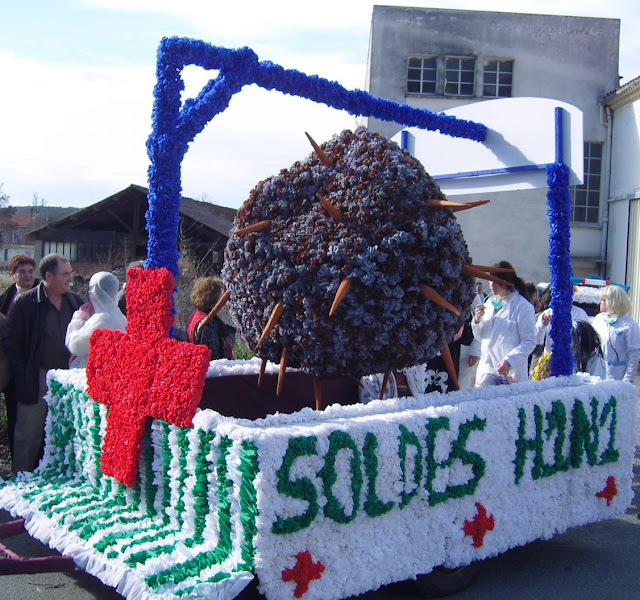 Terry and Bonnie
(from the Savoy department - a 'grand' dame and chimney sweep!) 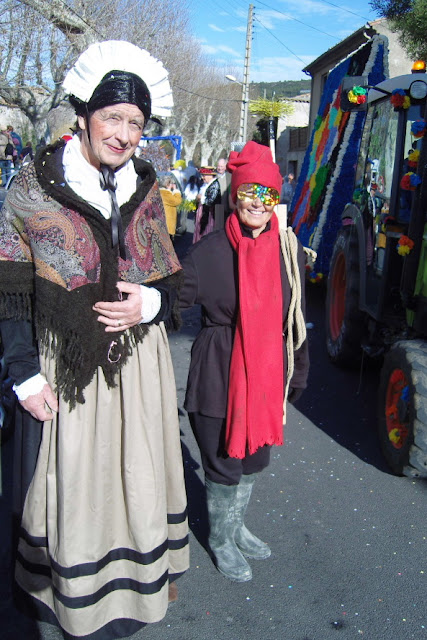 Bob the Builder aka Miki 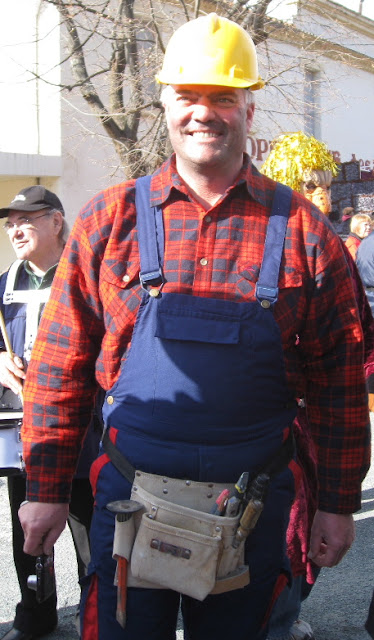 Some local residents, with the best view of the parade 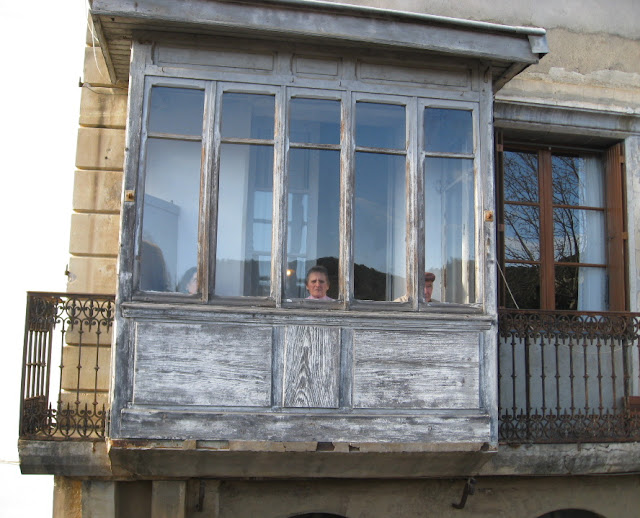 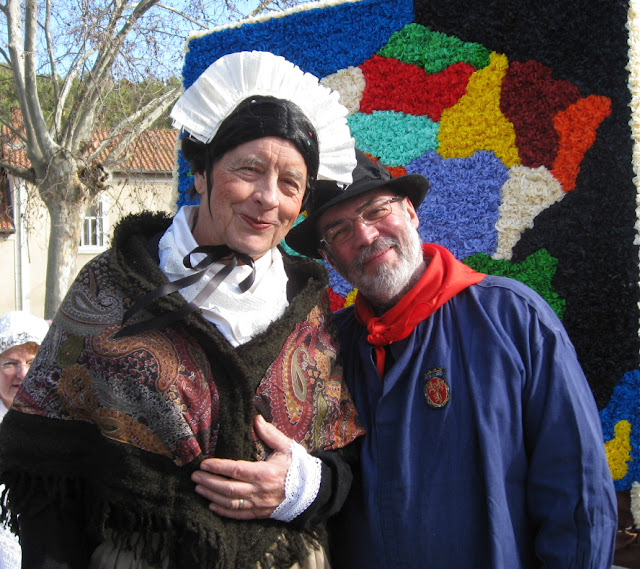 The week before the Carnival was the Maire’s annual lunch in the village. As always, a damn fine meal, followed by an afternoon of entertainment.

Actually, I didn’t do so well with the starter. I’m a bit of a wimp and haven’t yet developed a taste for foie gras or gesiers (duck gizzards) and that’s what came served on a bed of green salad. The gesiers were freshly fried up and served warm, and there were generous slices of foie gras on grilled bread. Everybody else enjoyed the dish, so it was me missing out ….. but I just can’t bring myself to eat them.

However I thoroughly enjoyed the rest of the meal, the company, and the afternoon’s show ...