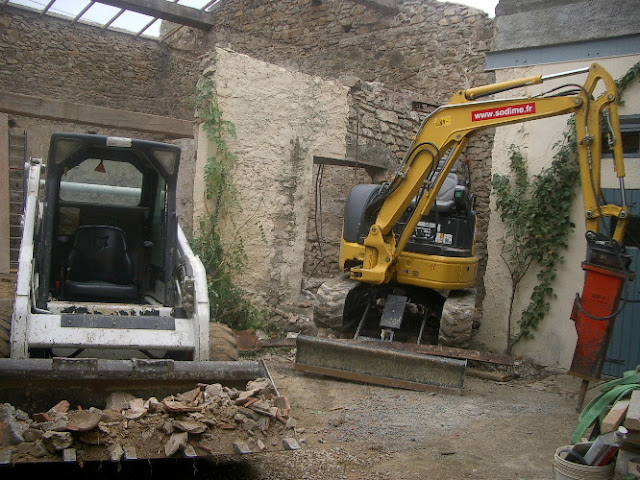 And so more pieces of the barn and verandah come down. It’s been a bit of an eye-opener – these French workmen are entertaining to say the least. Anita and Steve (from – following the world cup rugby around and the ) have been here for a few days and were highly amused by the goings on.
On the second day of work, the demolition team had their breakfast out the back before starting. Breakfast for all of them was a baguette. But the foreman washed his down with nearly half a bottle of red wine drunk straight from the bottle! I guess the rest was for lunch.
And deargod – the chain saw…… Fortunately wielded by one of the younger guys who had an alcohol-free breakfast – but no safety shoes, safety goggles or earmuffs. The sawing up of the timbers done on the ground was ok.
But when he was standing on scaffolding, sawing through a large beam with the end piece resting on his mate’s shoulder – that was a different matter. It was rather disconcerting to see the chainsaw in operation about 30 cm from his back. The picture isn’t very clear – ‘discretely’ taken from the kitchen window in not very good light. But the guy on the left has the piece of beam on his shoulder, and the pair of legs to the right belongs to the one wielding the chainsaw. You can just make out the vertical cut on the beam not far from his hand and arm, supporting the piece about to fall! 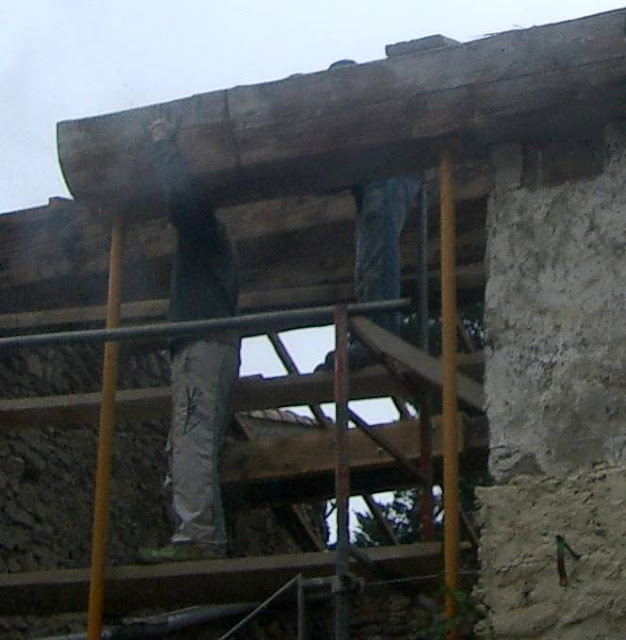 On Friday I was heading to early in the morning to take Diane and Colleen (also on holidays from West. Australia) to catch the train to . It started to rain and then turned into a torrential downpour. I could hardly see a thing and was driving very slowly. If we hadn’t been running late for the train, I would have pulled over. As it turned out, we arrived at the station at 8.22 – the departure time for their train was 8.20. However luck was on their side – it hadn’t left and they made it.
But when I got back, the workers had arrived, and showed me that the outside kitchen had flooded – now that the roof has gone from the upstairs balcony, water had poured through the cracks in the veranda floor. And also it seems that the metal through the concrete has deteriorated to such an extent that the veranda/ceiling is not safe. So there’s something that needs to be thought about. Fun and games – and the project has barely started.
at October 07, 2007