It really is a most beautiful island – and this post is more or less a travelogue with many photos….
What a great week it was – two bus loads of us left Bize on Saturday 7th, returning the following Saturday. I knew we were in for a bit of a singalong on the trip (!) when Elyette was thumbing through a book as thick as a phone book – it was a book of songs!
And so it started on the bus, when Fabian got out the squeeze-box……..

The cabins on board the ferry were surprisingly good – and smooth sailing all the way.
We arrived in , the capital, and did a morning tour. A really lovely town – and given that this is the town Napoleon was born in, there are many things ‘Bonaparte’. 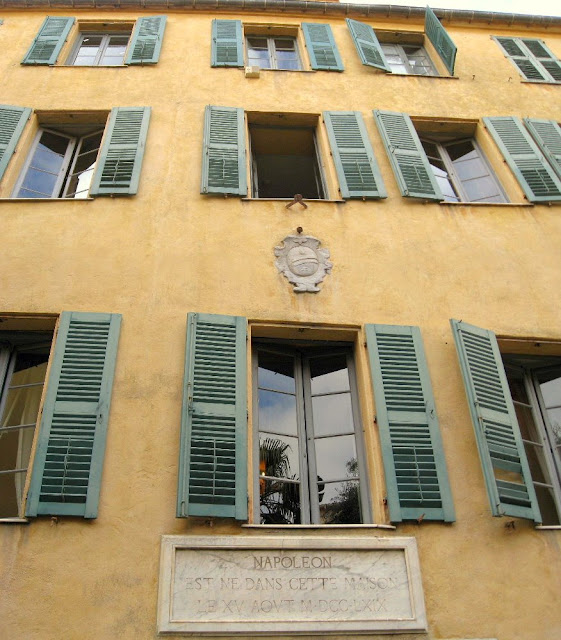 The house where Napoleon was born 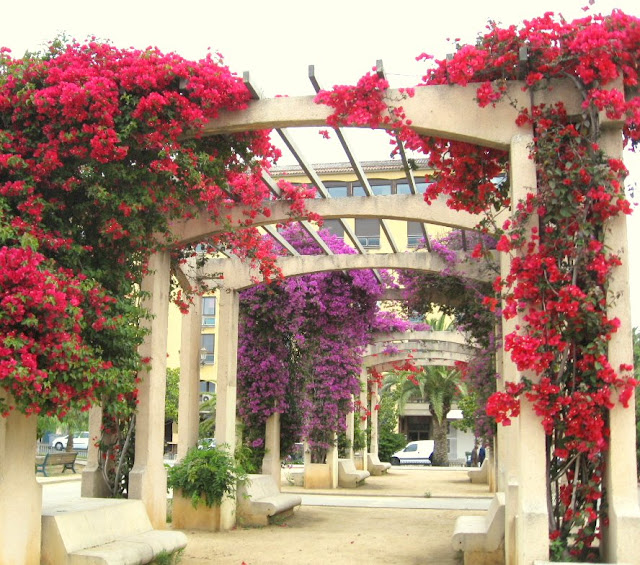 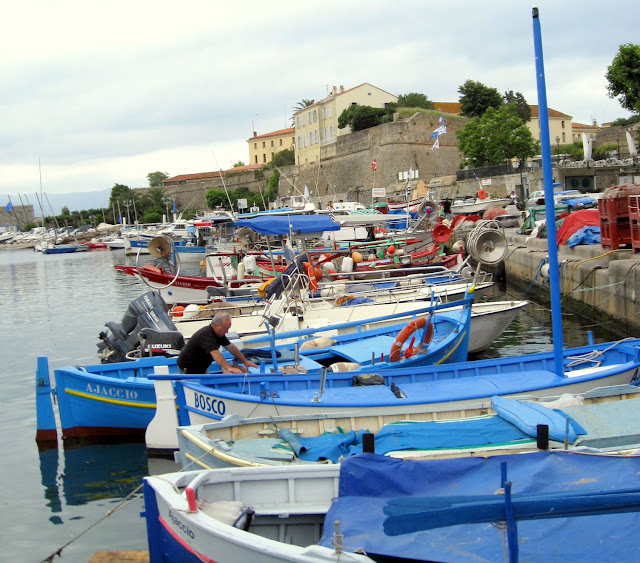 And while all the windows here are typical in that they have shutters, they’re different than those I’ve seen in the – the bottom half is hinged and opens outwards. 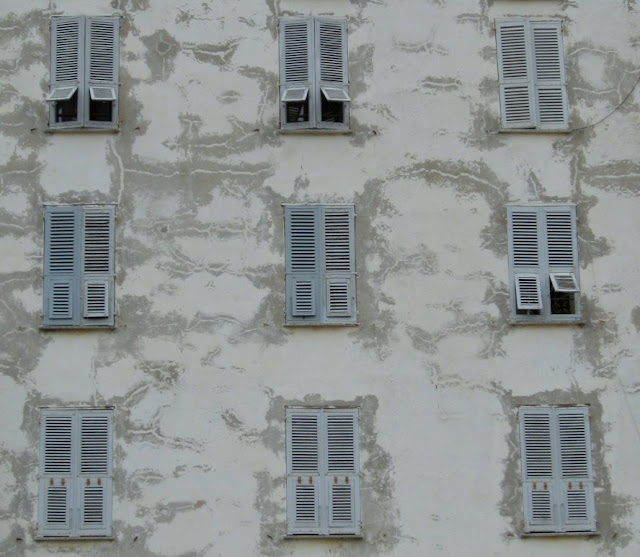 On the way out, we walked through the cemetery …….. a very strange place indeed. Tino Rossi – the famous Corsican singer, is buried here. 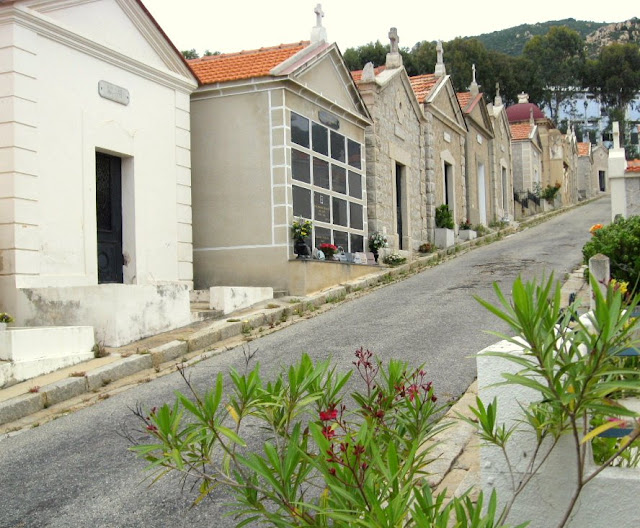 This looks like a small village street, but in fact these buildings are mausoleums and each one contains the coffins of members of one family. A little macabre but interesting.
In the afternoon, we drove up the west coast, a lunch stop at the Iles Sanguinaires – with a tower built on the point – one of 91 built around the coastline in the 1400s by the Genoese. 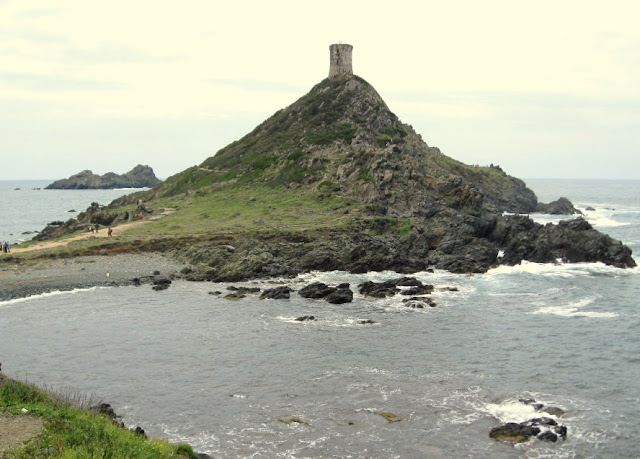 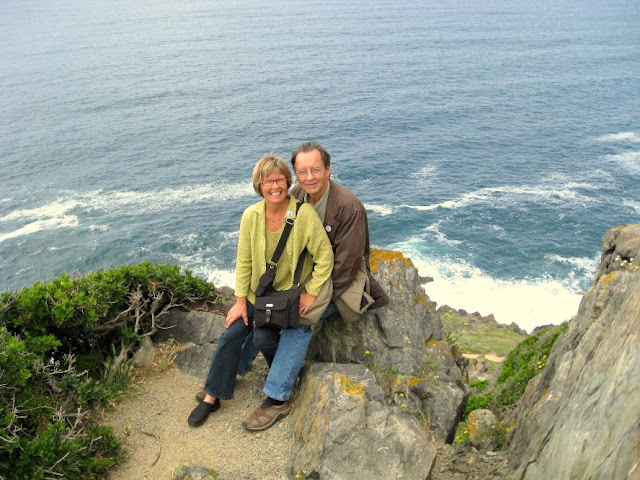 Friends Bonnie and Terry - from the village of Argel near Bize. 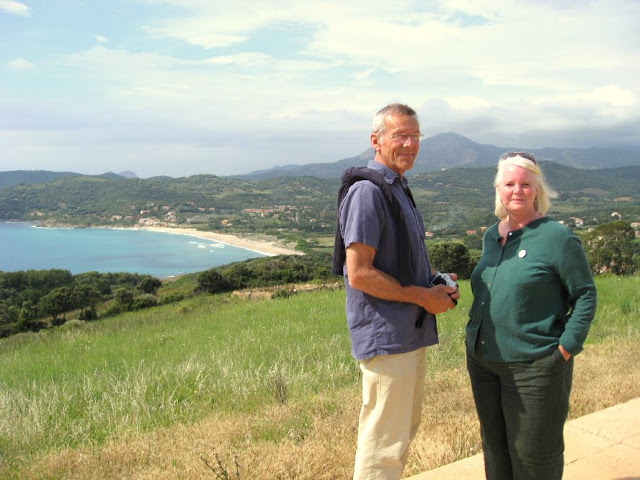 Patrick and Sandra
And then further north, through the area known as les Calanches de Piana ….. a most beautiful stretch of coastline of rugged red granite. It’s a bit tricky, as a lot of people (including all 95 of us!) get out of their vehicles and walk along stretches of the road, admiring the scenery down to the ocean and taking photos. 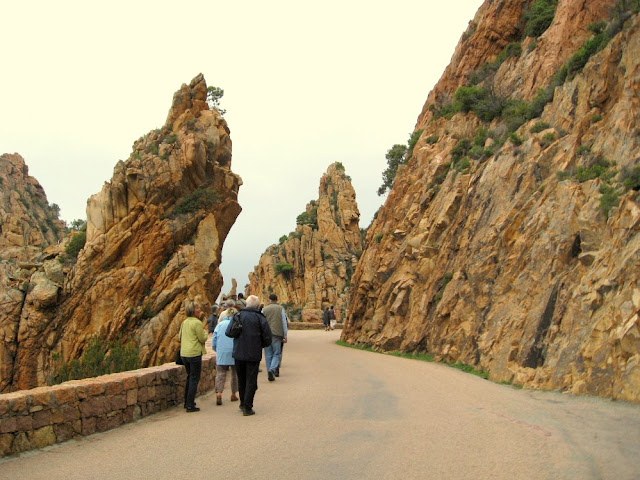 I was surprised to see so many eucalyptus trees growing all over the countryside. Lots have been used as street trees, and also in private gardens etc, but a lot had established in areas on the hills. It turns out the has had a bad problem with malaria in the past and part of the problem was draining wetland areas, and certain kinds of eucalyptus are very good at this.
In fact when we arrived for our overnight stop further up the coast at the town of , I felt I could have been in . The accommodation for the night was really good – not flash, but big spacious rooms and beautiful gum trees out the window, with mountains in the background ….. amazing. The next day we headed west across the centre – through the stunning Parc Naturel Régional de Corse. This is not a trip for anyone with a fear of heights and narrow mountain roads. I have to say our bus driver did an amazing job – there was a fair bit of manoeuvring and backing up by us and oncoming traffic.
This really is a rugged place – there are lots of sanglier (wild pigs) here, although we didn’t see any. And the domestic pigs are allowed to run wild – and we saw lots of them. They forage in the forest and eat a lot of chestnuts, for which the island is famous. We had a dish of wild sanglier (a type of stew) for one of our lunches and I must say it was really delicious, but very strong and rich – a little went a long way.
The afternoon at the pretty coastal fishing and then to our accommodation – a little holiday village complex in the settlement of Favone. Basic, clean and all we needed for the four days. The organisation was great – the restaurant served very good food indeed, considering the numbers, and they had the timing down pat.
Given that there are 95 in the group (there were 32 last year when the group went to – perhaps the word’s got around that it’s good fun!) – the outings have been staggered. i.e. each bus does a different thing than the other on a given day, although we all end up seeing the same things. While the restaurant at our 4-day stop accommodation was geared for that many, other smaller ones in the towns that we went to (all booked ahead and prepared) wouldn’t have been pushed to feed us all at once! 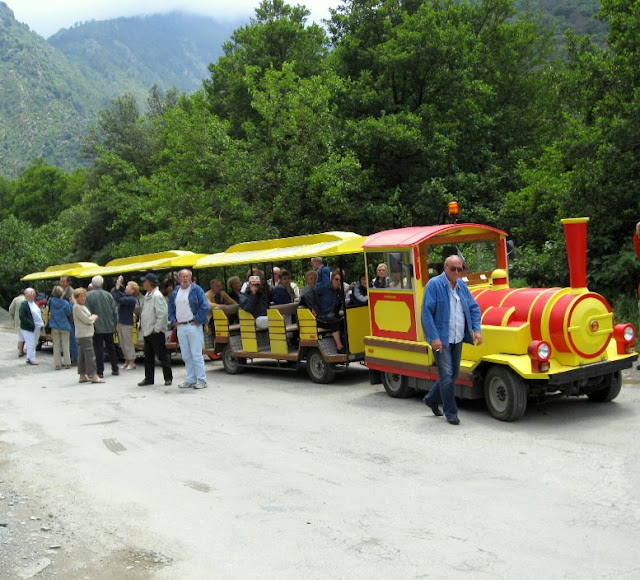 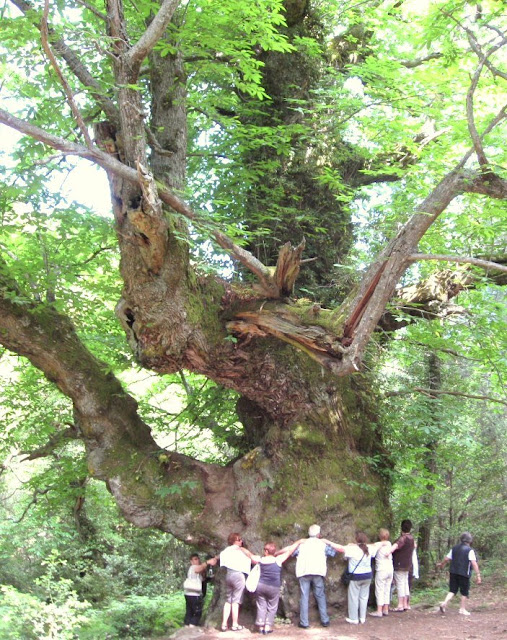 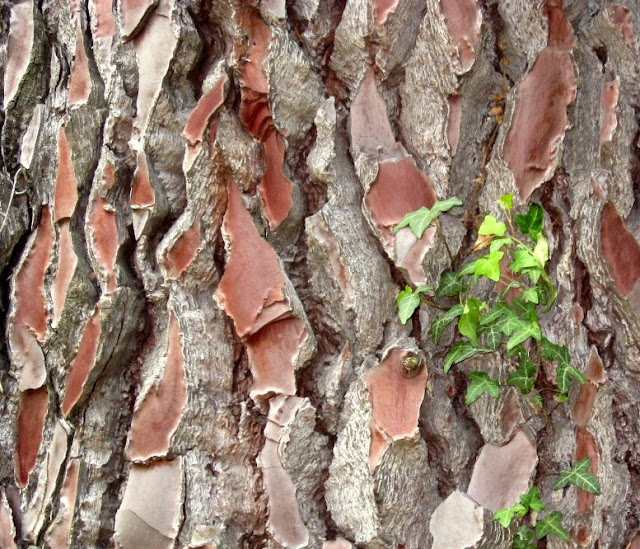 And interesting bark of an old pine.....
And then onto the Aiguilles (needles) de Bevella – another beautiful chain of mountains.

Cows are also allowed to roam fairly freely in these parts – and the scene here looked a bit like a Milka chocolate ad …. 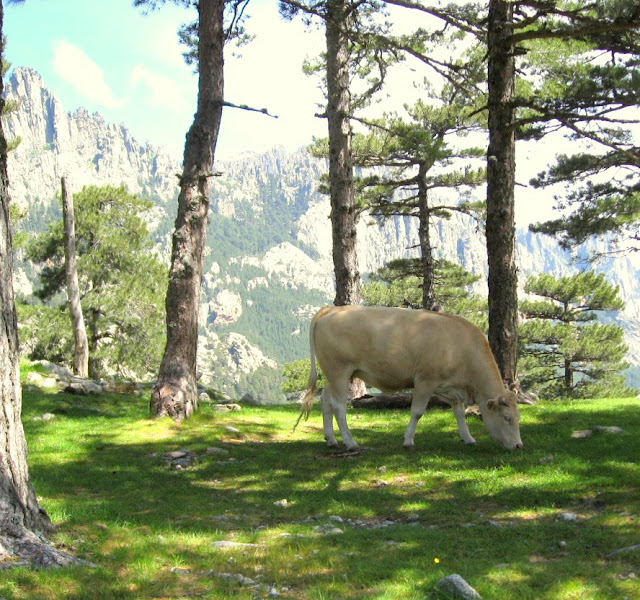 and then south to Bonifacio – which is described as ‘the jewel’ of . And it is a lovely place – there are many miles of dramatic chalky cliffs and the old town itself and the fort are built atop a rocky outcrop with amazing views.

We did a boat ride for an hour or so, far out enough that we could see clearly in the distance, 12 kilometres away.

Heading out along the natural harbour – the Goulet de Bonifacio
And Elyette had saved from bread rolls from lunch – and Robert, our guide, ended up feeding them to the seagulls! 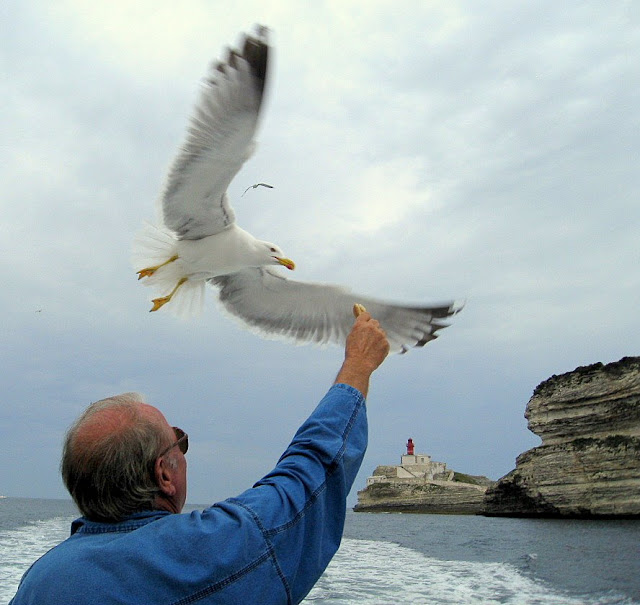 He’s a local Corsican who lives in the mountains - he’s a very funny man who spent a lot of time telling jokes, and he’s an excellent guide. I understand probably about 10% of the commentary, but sadly don’t get any of the jokes. But they tell me they’re all more than a little risqué – and judging by the applause, howls of laughter and tears streaming down people’s faces, it seems it is so.
A couple of photos of a little restaurant in the mountains on the side of the road where we stopped to take photos - 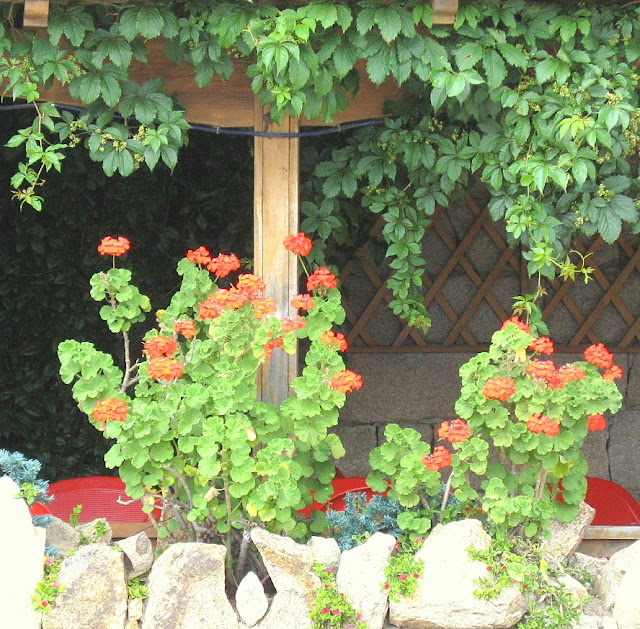 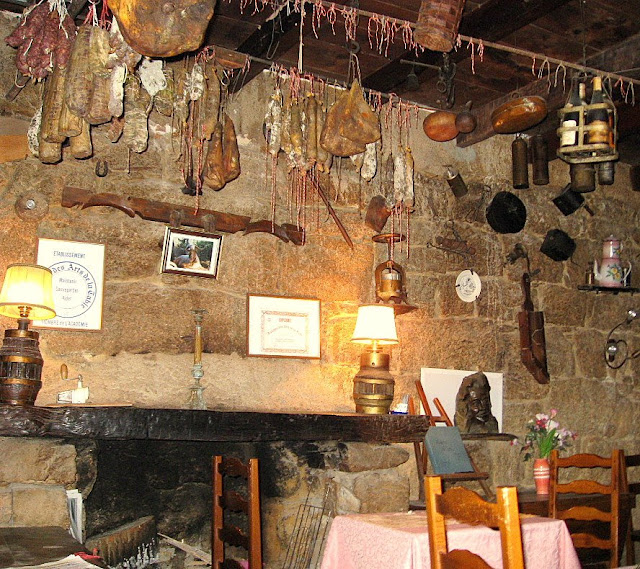 – we didn’t eat here, but I popped my head inside for a photo as Robert said this was a very traditional restaurant – producing all their own meats (hanging above the dining room).
I had a day off on Thursday – it was another long coach trip, this time to the north of the island to what the . The others said it was lovely, but a very long day. And as every day we’d spent long hours on the bus, I felt like a bit of quiet and solitude – a wander along the beach, a lovely salad for lunch in a restaurant and caught up on the next book-club book.
Our last day, north to where we were leaving on the ferry in the evening. But first, a drive around Cap Corse, the ‘jutting out bit at the top’. More dramatic scenery, stops at small villages – 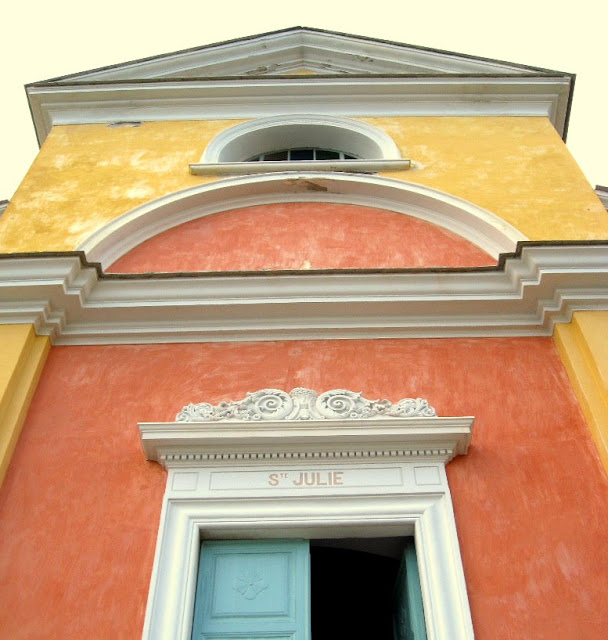 and then back to for lunch. After lunch, a little entertainment from the waiter / pirate / traditional singer –


And then a last wander – is a lovely town with an old port and fishing harbour with mountains as a backdrop. Not surprising – given that the whole island is mountainous.
No matter that you’ve read exactly that – it isn’t until you’re there that you can comprehend what an amazing place this is.
And it seemed appropriate that we did the homeward-bound leg of the journey on something ‘Bonaparte’ …. 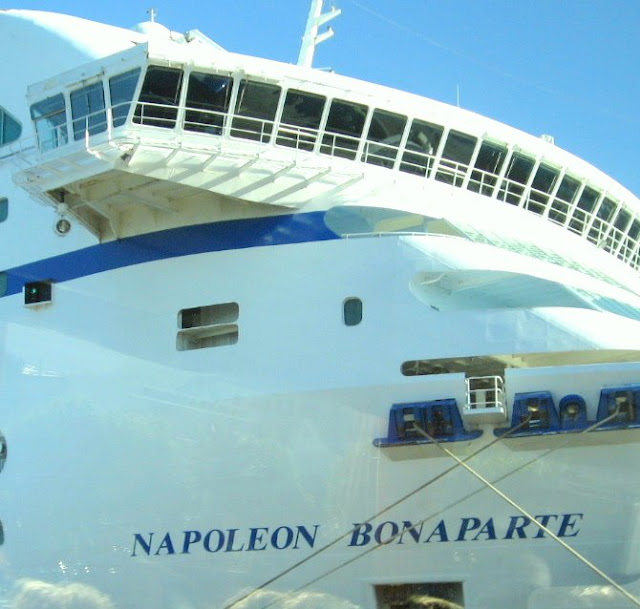