Notes from Down Under

It's been beaut being back here and catching up with friends and family. It's been two years and I'm really noticing the development and changes that have been happening in Perth. It's certainly been a boom town (up until recently!), mostly owing to the overseas demand for the State's mineral, and Perth's gone ahead in leaps and bounds. Still as beautiful as I remember it. 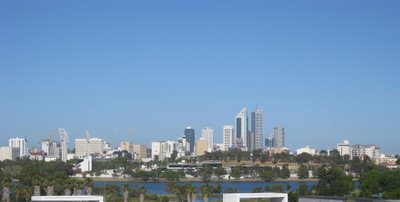 Although I am struggling with the heat - there's been somewhat of a heatwave happening here the last two weeks. I have been following closely the weather conditions in France, and indeed the rest of Europe, and there've been times when I've been a little envious of the cold.

While I'm in Perth, I'm staying mainly in a lovely apartment where Paul is living with gorgeous views across the Swan River towards Perth. He is now the proud owner of not one, but two motorbikes, plus THE yellow car (more of that later). And not long after arriving, I went for a ride (pillion) on the yellow bike.

Let's just say it was hot, and my old knees suffered from being scrunched up and not being able to stretch out, and I was a little nervous! But a quick spin around Kings Park and taking in the views was worth it. 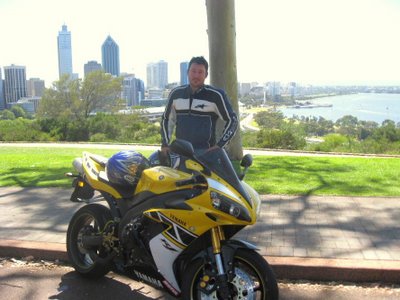 I used to sometimes ride a (very much smaller) motorbike many many moons ago - unlicensed and only off-road - and I have to say that I much prefer that to being a pillion passenger. In fact we still laugh about it – when Paul was little, I used to take him sitting on the petrol tank in front of me!

Things are now the other way around – he takes me. Though I don't sit on the petrol tank!
I've been up and down the coast around Perth, taking in all the new developments happening in the seaside suburbs. A couple of times, went to a lovely cafe overlooking Cottesloe Beach.

Sadly there was a fatal shark attack at a beach not far from there, the day after boxing day, and since then there have been numerous shark sightings in the vicinity. White pointers (great whites) are a protected species – and unless they're proved to be a menace, they cannot be killed. The family of the shark attack victim did not want this shark hunted down.

There have been constant sightings of sharks since then, and barely a day goes by without reports from different beaches. One of the days we were there, another one was sighted not far offshore from the cafe, as were sitting on the balcony. Three helicopters headed to where it was, hovered over it until the shark watch boat arrived to try to herd it out to sea. 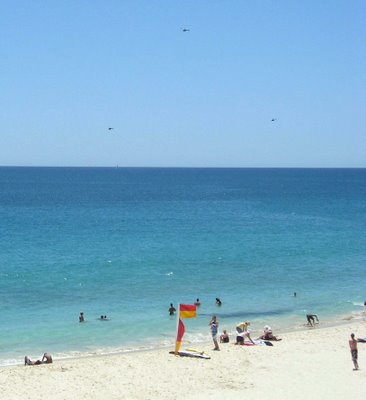 I caught up with my old friend Sue who is back in Australia temporarily from Bulgaria and working at the ABC (Radio) in Geraldton. And that's where I've just been for the last week. What an adventurous five days that's been. 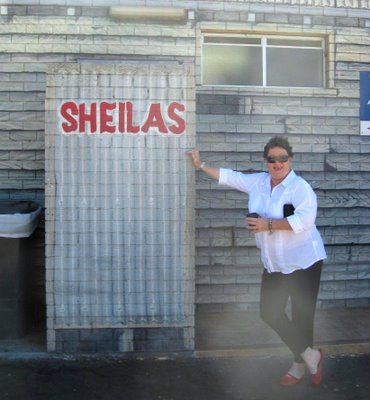 Paul kindly put my name on the insurance policy for his car, so this is what Thelma and Louis headed up the west coast in. 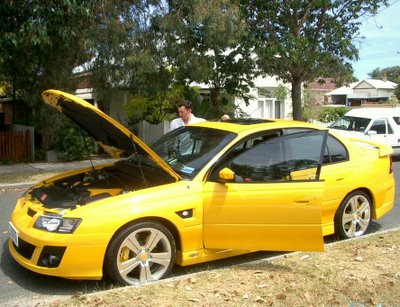 Admittedly I did have to have a few test drives with him, six gears, dash board like a Boeing 747 and more horses under bonnet than I've ever dealt with.

And very expensive wheels that under threat of death I wasn't to crush up against the kerbs. Hence, we nearly found it necessary to take a cab to the kerb when I parked up.

It's a HSV SV6000 – and let me say that when overtaking cars and road trains on those long long stretches of open road between Perth and Geraldton, it goes like the proverbial off a shovel.

We SHOULD have made really good time on the trip north, but the GPS let us down in a new suburb of Perth that neither of us was familiar with, and we spent a half hour going around in circles.

Finally we asked someone who said that GPS systems lost the signal in this area, and we had to get directions to the Brand Highway the old fashioned way. And then of course any 'street cred' us two old girls in the sporty car thought we may have had, went right out the window.

Anyway, we made it and had a great time catching up and for the first time in a long while. And for a change, it was me being shown around as a tourist - very different from my last two years in France!

I've only passed through Geraldton once before, and know nothing of the area.It's one of the windiest places I've ever been too, and it apparently is like this pretty much all year round. And proof of the incessant winds are the bent trees all over the place - 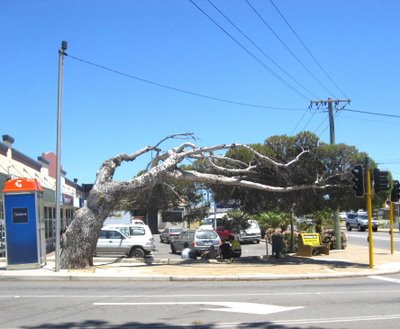 Downtown Geraldton - a street tree on such a lean
that it's growing under the powerlines.... 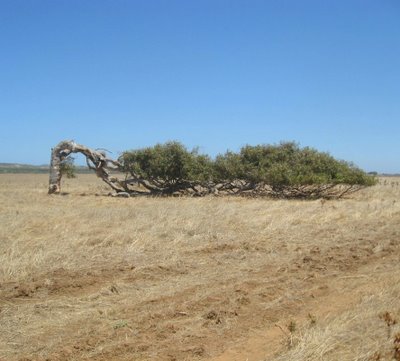 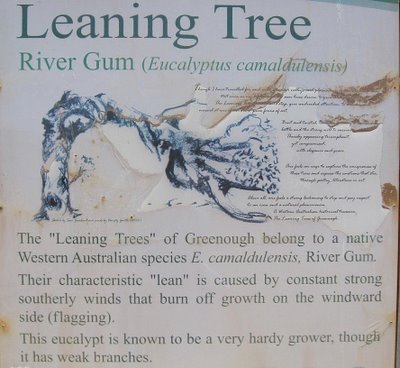 The coastline is beautiful, there are miles and miles of white beaches – and some literally metres from the centre of town. It's a very progressive town and it's looking good. Main industry has always been crayfishing (western rock lobster), sheep,cattle, wheat, but now it's also mining, tourism. Also, olive groves are springing up in the region, albeit all the trees have a definite slant to them! 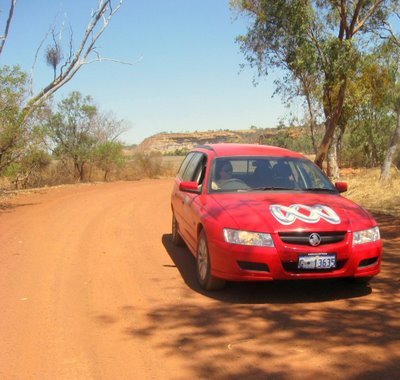 The countryside is fairly flat - large paddocks, sand dunes near the coast and some rolling hills. Sue took me to Ellendale Pool, which is a little gem. It's a little gorge and swimming pool, more like you'd find further north at Kalbarri. 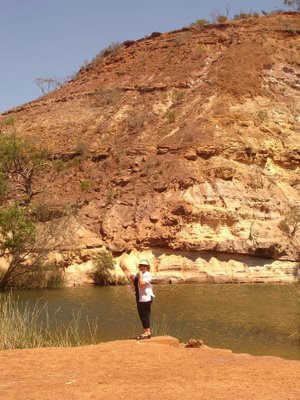 And if you felt you'd be better off swimming in a fresh-water environment, after all the shark scares in the ocean, there's this to consider! 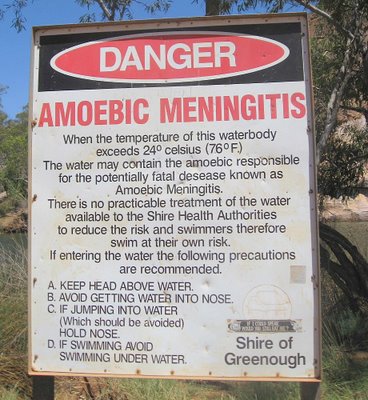 And the highlight of my stay in Geraldton? Well, we decided to give ourselves a Christmas present – a half day plane trip out to the Abrolhos Islands, landing on one of the islands and time for a bit of snorkelling on the reefs. What an fantastic experience that was. 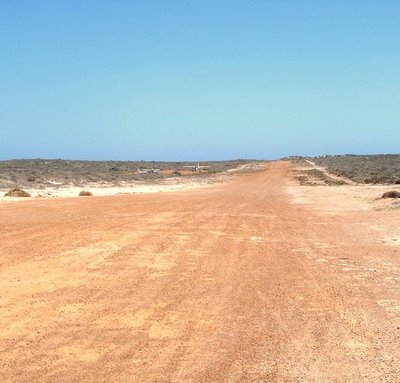 Not a road - the airstrip 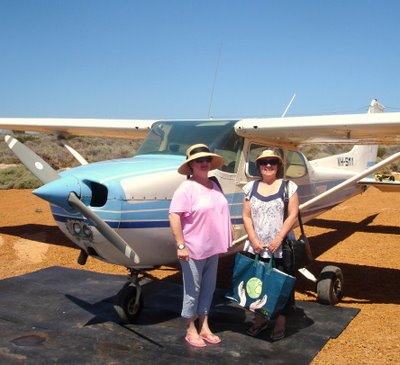 And we had company in the form of a sea eagle that kept doing fly-bys and checking us out. 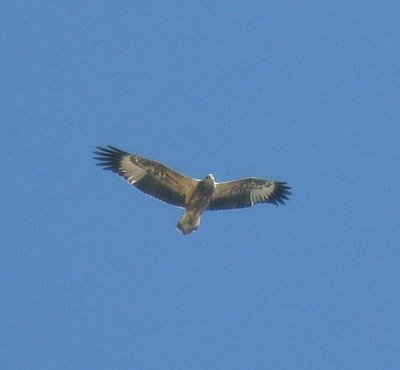 The islands are low-lying atolls spread roughly north to south for about 100 kilometres, and about 50 kilometres off the coast in the Indian Ocean. Because of all the reefs surrounding the islands, there have been numerous shipwrecks over the years.

The whole of the region on the mainland north and south of Geraldton is called The Batavia Coast because of the famous shipwreck of the Batavia and the mutiny that followed. Such an interesting (and rather gruesome) story. 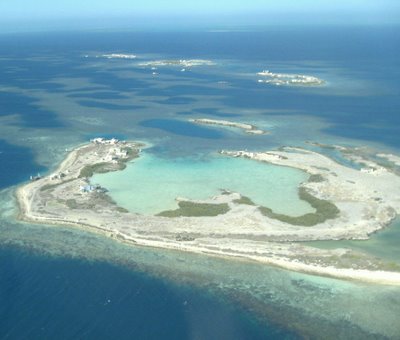 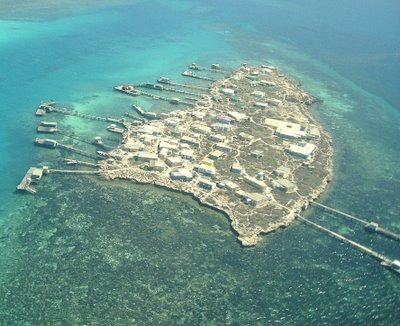 These days some of the islands have fishermen's huts on them, and are occupied for about 3 months of the year during the crayfishing (rock lobster) season. And as our pilot pointed out – he figures that it's the wives of the fishermen who have brightened things up a bit with the different colours of paint! 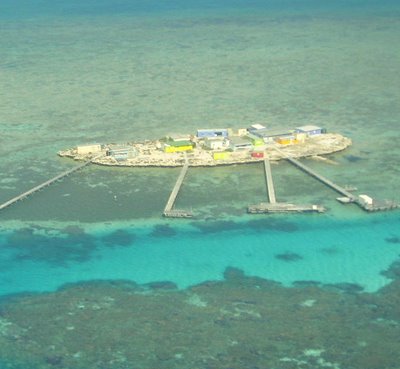 And how good was this - after snorkling, fruit, sandwiches and coffee were served by our multi-tasking pilot on the guano-covered jetty - while being paid close attention by the sea eagle! 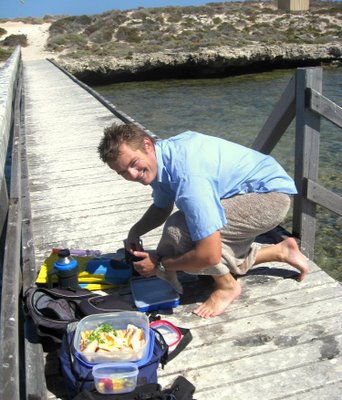 There was a slight downside to the end of my trip though. The yellow car got away from me a little on the return trip to Perth and I ended up with a rather expensive speeding ticket. All that power under the bonnet and such long open roads – the temptation proved a little too much and I am now paying dearly. Oops.

It will definitely be a slower ride for my next trip – down south to my home town of Albany, staying with Col and Hass (who visited me in France recently – previously featured here doing a little grape picking) and other family and friends.

Wow are you having fun but you can keep your sharks to yourself and dont bring any back to the river/pool in Bize! Look forward to seeing you soon but you will have to wrap up before you land in France its freezing!!!

Sounds like yoiu are having a ball back in the land of Oz.
Hope you and Mum have a great time in Albany.... and im sure she has told you of my great news. We found out today that we are having a little girl (shhhh dont tell Mum as i cant get her on the mobile in Albany so she doesnt know yet).
Anyhoo enjoy your trip and a big hello to Paul for me.
Seeya