I have mentioned Monsieur Robert Miquel and his village butcher shop before – and have been curious to know more about him and the history of the butcher shop in Bize. 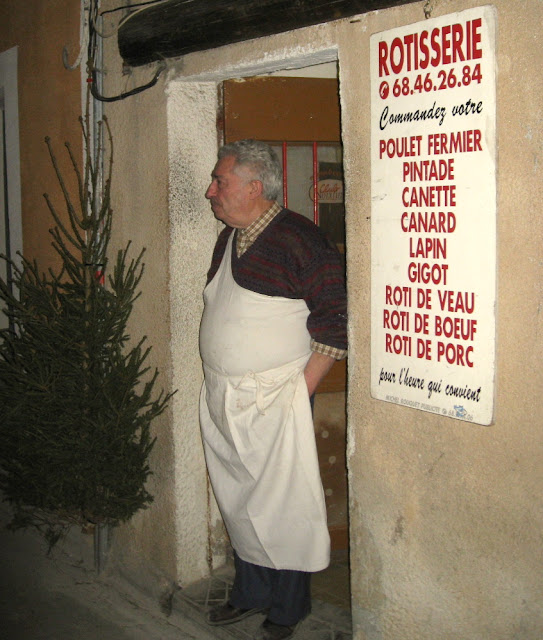 M. Robert is retiring on 31st December this year, so I thought if I didn’t do something about talking to him soon, then the opportunity may be lost.

I was kindly helped (translation and setting up the meeting) by my friend Miki Bowditch who lives in the village. He speaks French fluently, at a level I can only aspire to!

M. Robert kindly invited us into his home and kept us entertained for some time.

He told us that the building itself has been a butcher shop since approximately 1760, and that he is the fifth generation of his family to be a butcher.

The good news here is that the family line will continue – his niece Claudine Bandinelli has worked in the shop for a long time.

She recently graduated from her studies in Lezignan, and will be taking over when M. Robert retires, and so she will become the sixth generation to continue the family trade.

In his time, back in the 1920s, there were four butchers in Bize. For the last twenty years, Chez Robert’s has been the only one in the village. Walking into the shop is like walking back in time – small low doorway leading off a narrow street in the old centre of the village (Bize was once a walled village), there’s an old and worn chopping block, wooden panelled doors on the cool rooms and dried sausages hanging from hooks along the wall. 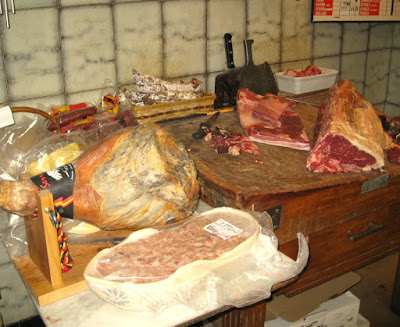 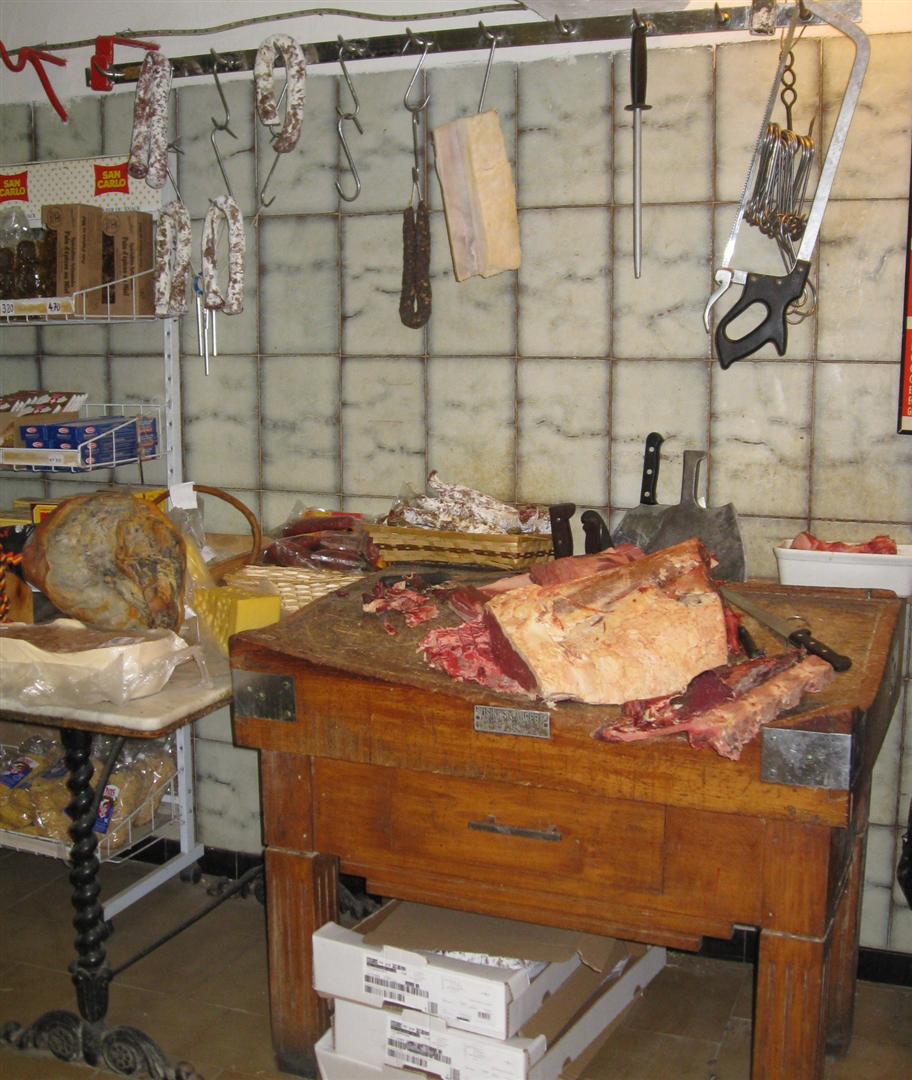 Speaking of sausages, M. Robert makes his own fresh sausages – he tells us that the recipe is his grandmother’s and the secret is to use good ingredients. I can vouch for the pork sausages – they’re delicious, and a firm favourite for BBQ’s in the summer. 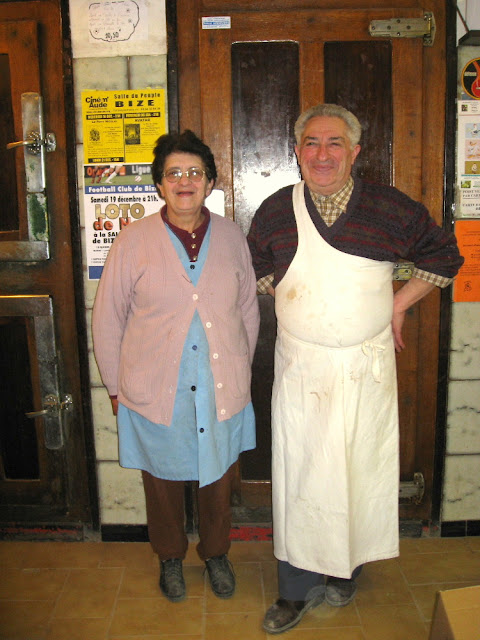 M.Robert and his sister, Mme. Bandinelli.


During World War II, the government controlled the supply of meat, with only beef being given to Robert’s father. The beef was distributed to the villagers in exchange for ration stamps, 100g per person per week. However, veal, pork, mutton and chickens were also sometimes available, obtained by ‘other methods’ and distributed in the ‘normal’ way!

Throughout the year, you can always find fruit and vegetables of some variety for sale, in boxes on the windowsill outside the shop. These are surplus vegetables from friends, family and clients of M. Robert which he sells at a very good price. Not part of his business, but a way for people to earn a little extra.

And I can say from first hand experience, these are the freshest and best vegetables you can buy – the broad beans that can be found in season are divine. They never make it to the pot – always eaten raw in this house!

M. Robert totally agrees with me about eating them raw – though he insists they’re best either eaten with a good garlic vinaigrette made with healthy olive oil, or else simply dipped in salt. 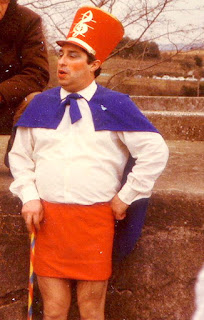 From 1970 to 1999, M. Robert belonged to the Maxi Majorettes (cheerleaders) of Bize-Minervois – a group of men from both Bize and Mailhac who made between five and six floats for the Bize Carnaval held every February.

They dressed up in skirts (Major-ettes!), wore make-up for the occasion and marched through the village with all the other floats that made up the cavalcade.

The Majorettes used to be invited to do openings at football matches and various other events.
They performed for sporting events as far afield as Perpignan and Bordeaux.
They also performed at various ferias in the region (festivals in this part of France, usually including bull fighting), including once at the famous Roman arena in Nîmes.

In the 1960’s, he also did theatre in the Occitan language. He is a fluent speaker of Occitan – and when I asked him how he learned it, he said he grew up with it being spoken all around him, especially by the older folk.

One of his theatre performances was “Los Profitaires” in which he played the part of the avocat (lawyer), Maitre Fort Bec (Mr. Strong Mouth). 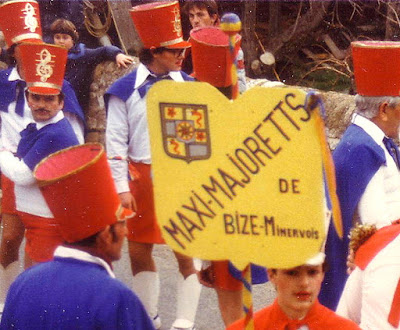 M. Robert is also a keen singer with a fantastic voice – if you’re lucky, you can find him in his shop singing opera. He used to sing in a choral group with about 40 members - again from both Bize and Mailhac. They called themselves “Les Fils d’Argent” (Silver Strands).

They were a popular group and used to sing at parties and in restaurants, singing and doing little sketches. In one year alone, they did 49 gigs.

His involvement with the choral group was during the years that he was also active with the Maxi Majorettes. He wonders how he ever had enough hours in the day, given that he was also working 7 days a week in the shop. He recalls that on Sundays, he used to leave home without eating lunch, to go and join the group for practice.

Early in the new year, the shop itself and the rooms behind will be renovated and modernised. So I’m delighted that I’ve been able to speak to M. Robert, take some photos of him and his shop and get a bit of his own history.

When asked what he planned to do when he retires, he said – ‘Go fishing’……

Merci M. Robert for your time, and very good wishes for a happy retirement.