While Paul was here, we managed to get out and about to visit a few places – including a trip to Montpellier where we had what is probably the best lunch I’ve ever had in my life. Our planned route was Montpellier in the morning, then a scenic drive back through the fishing villages around the Etang de Thau and probably have lunch at one of the seafood places there.

But as often happens, we were a little slow in getting off the mark and decided to have lunch in Montpellier. And then I remembered I’d read about an amazing 3-star Michelin restaurant in Montpellier that I’d always said I must try to get to one day.

Before Christmas, Paul had said he was at a loss as to what to get me for Christmas, I’d said ‘Just take me to lunch somewhere …………….’. Little did he know where that would turn out to be. It was a spur of the moment thought, and a long shot – but I suggested we try to get in for lunch that day.

I thought that (i) it possibly wouldn’t be open between Christmas and New year, and (ii) if it was, it would probably be full. (i) It was, and (ii) it wasn’t.

Actually the main dining room was fully booked, but they said there was the smaller ‘salon’ and there was space there. And so that’s where we had lunch. The restaurant is called Le Jardin des Sens and is run by twins Jacques and Laurent Pourcel.

I must say that it was an experience I’m not about to forget – sadly it was not the sort of place I felt I could whip out my camera and take photos of the food! We didn’t feel out of place there – while we weren’t scruffy, we weren’t ‘dressed up’ and it was nice to see families and casually dressed people there enjoying beautiful food. While the courses weren’t huge, we were so well plied with lots of little tasters before and between courses, and also a huge plate of pre-dessert desserts! Exquisite.

So while that’s probably not the lunch Paul had in mind when we planned our day trip, we both thoroughly enjoyed it – one of those spur of the moment things that turns out just fantastic.

We continued our sightseeing drive back home and called into Sete, Meze, Bouzigues and Marseillan.

Then a few days later we drove to Albi in the north where we stayed overnight.

What a gorgeous town Albi is - lots of red brick and timbered buildings.

We visited the Toulouse-Lautrec Museum, housed in the old Bishop's Palace near the Cathedral.

We also were quite lucky getting lunch in Albi. I'd read that it's difficult to find somewhere open on a Sunday, but the one place that I'd read about and was recommended was one of the few places open when we arrived.

It was tucked away down a little alley and full of people having Sunday lunch. Paul was very adventurous - he ordered hare - rare!

After my past experience of eating the very hare I'd despatched, and telling him that I hadn't liked it, I thought it was a brave choice. But it came out like a small whole filet - it was all the meat along the back - and looked like filet steak. He said it was delicious and I took his word for it. Rare hare! ewwww

The Cathedral itself is enormous and dominates the skyline. 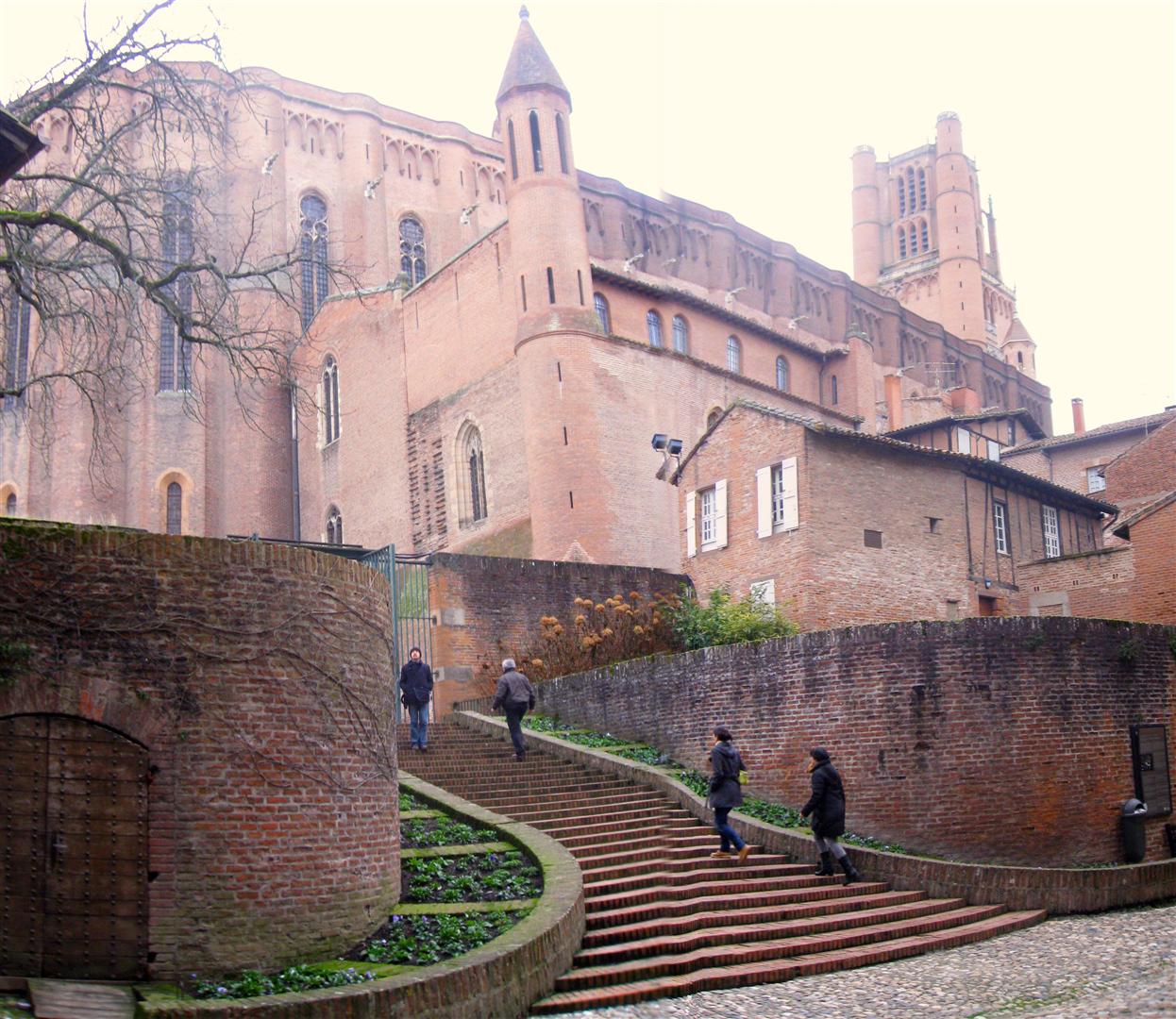 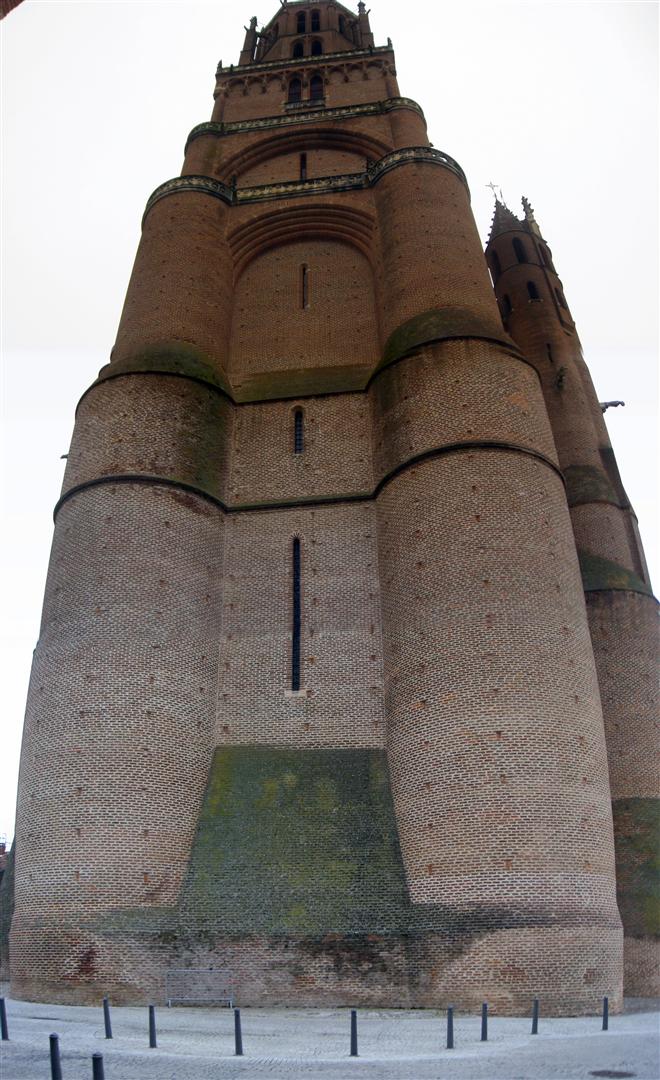 We had an overnight stay, and then some time the following day in Toulouse, before picking Nic up late afternoon from Toulouse airport.

And then back to Bize – via Carcassonne where we needed to drop Nic off to pick up her car.

Now, I was debating the wisdom of writing about our ‘experience’ at Carcassonne Airport as I really am expecting a knock on the door from the Gendarmes – or at least a summons or a letter. However, what’s done is done.

So, what happened was this.

We arrived at Carcassonne Airport in the dark – Nic’s car had been parked in the car park for just over 24 hours, and she had the ticket with her. We waited before driving off to make sure that she could pay for her ticket at the machine and get out of the car park.

No such luck. She tried several times, but the message on the machine was saying that the ticket was faulty. The airport was closed – there was no one around. There was a button on the machine to speak to someone. We tried it, but no answer.

It was beginning to look like the car would have to stay another night in the airport car park and we would have to drive all the way back to Carcassonne the next day to pick it up.

So, we figured we would try to get the car out (and I’m thinking there may soon come a time when we’re going to regret this).

First attempt – I would drive up to the entrance, take a ticket but not drive through. We would take the ticket to the machine to get it validated for a ‘free 15 minute stay’, give the validated ticket it to Nic and she could drive her car out. It sounded good in theory – we tried it. It didn’t work.

Second attempt: Paul thought there might be pressure points on the outside of the exit boom, and that if I backed up hard against the boom gate, with Nic on the other side ready to plant her foot, the pressure point would lift the boom gate and we could both get clear. Tried it - didn’t work.

Third attempt: I would back up to the entry boom gate, press the button and get a ticket, drive away quickly, and Nic would be on the other side, ready to race out when the boom gate went up. That didn’t work, the boom gate didn’t lift. There was obviously a sensor that realised another vehicle was too close to the boom gate on the inside of the car park.

Fourth and ultimately successful attempt:  Ditto above, but Nic kept a car’s length back from the boom gate, so that when it went up, we both shot off in a shower of stones and she cleared the barrier.

We have all laughed about this since – a rather nervous laugh, mind you. The World’s Dumbest Criminal video clips come to mind .… because of course (and we were aware of this at the time) there are security cameras.

So we’re figuring our number plates and antics are well and truly recorded. But I’m living in hope that the faulty technology that affected the parking ticket machine that night was also playing havoc with the security cameras!
at January 12, 2011