Since the flood on the 16th March, most of the pools left at the edges of the river and in the vineyards have dried up. Nic and I and the kids have managed to rescue quite a few fish in the last couple of weeks and have returned them to the river.

Under the bridge, there's one large pool that’s been slowly shrinking – the smaller it gets, the easier it is to scoop the fish and at the moment it’s less than a metre across.


And the other day, we saw a little snake there, not doing a lot. And then today, Nic rang frantically to come down as it was still there and was trying to catch fish! So I raced down and actually managed to get it on video – the very moment when he actually caught a fish! Talk about luck with the timing ………. 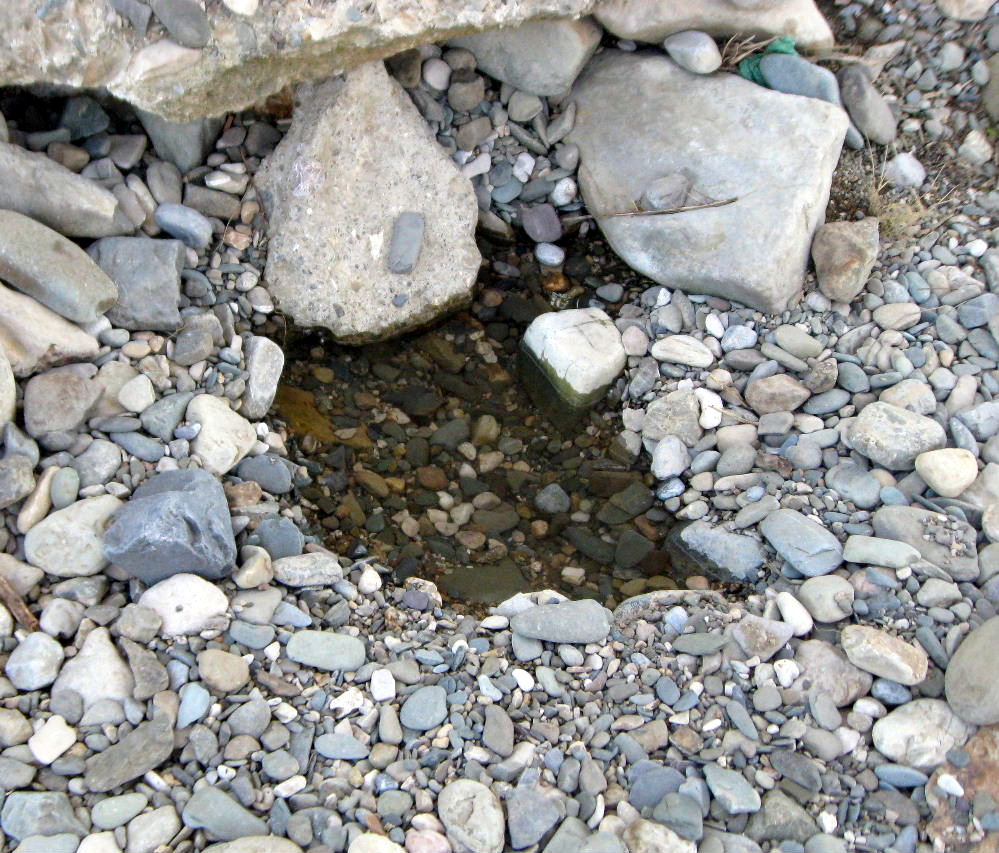 Now the unfortunate thing is that when I moved on the rocks as he was crawling away with it in his mouth, I must have frightened him and he dropped the fish on a rock and headed back to the water. I put the fish back in the water, and despite him probably wondering what the hell had hit him, he swam away. Though probably only to be eaten at some time in the very near future.

The good news is that the snake wasn’t too rattled by it all, as five minutes later he’d caught another one – really!

We couldn’t believe our luck at seeing all this close up, right in front of our eyes. He’s in snake heaven – captive prey with nowhere to go and obviously fairly easy to catch. No wonder he’s in no hurry to go back to the river where I imagine their meals aren’t this easily come by. 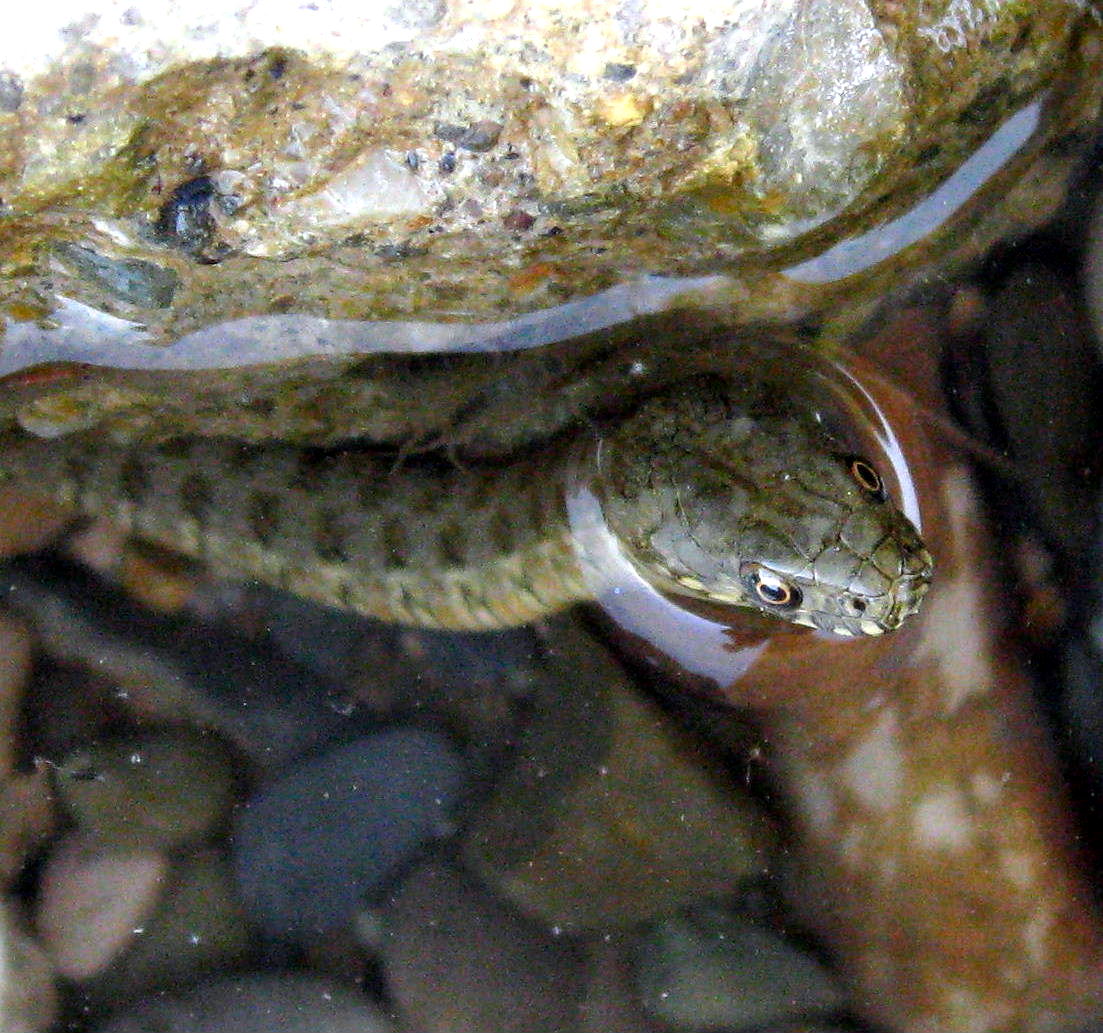 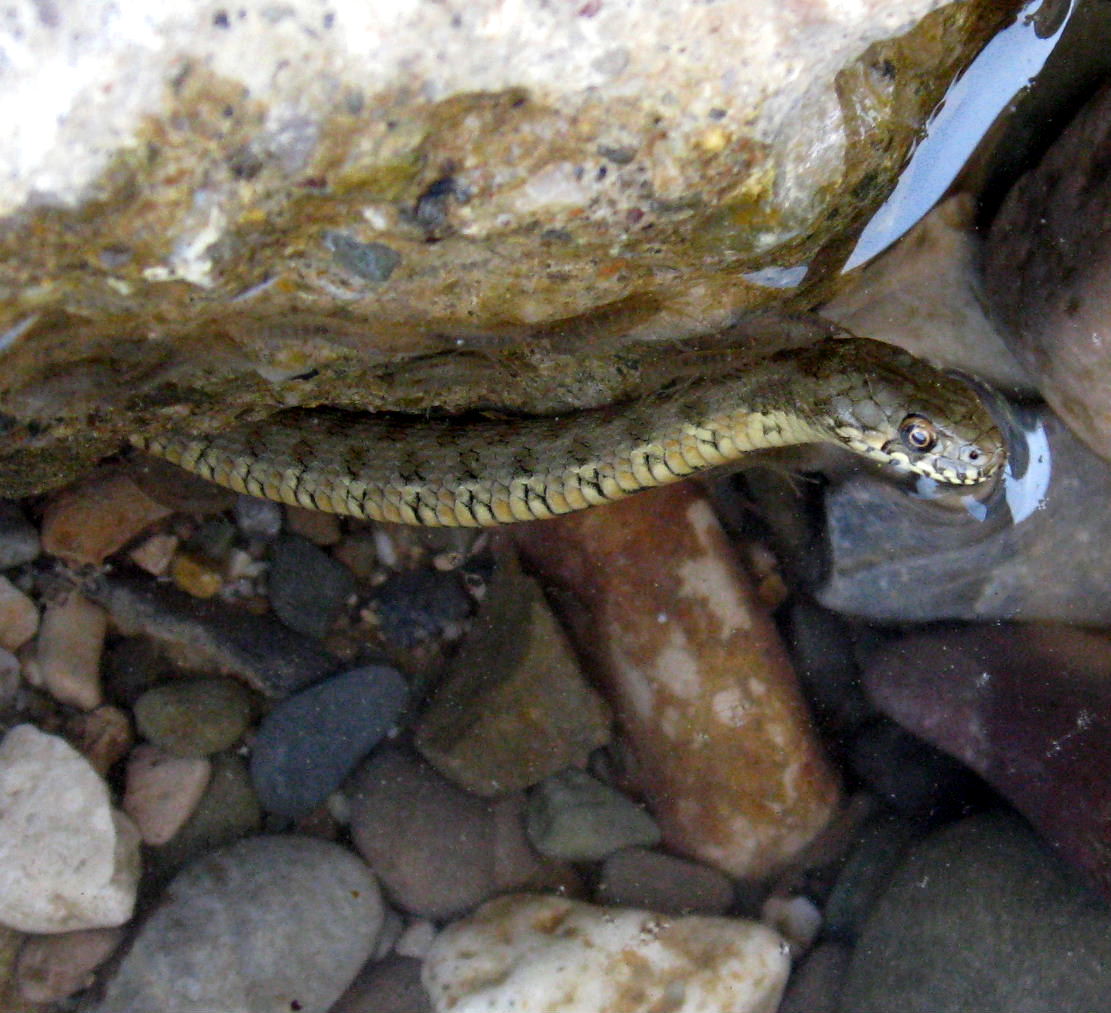 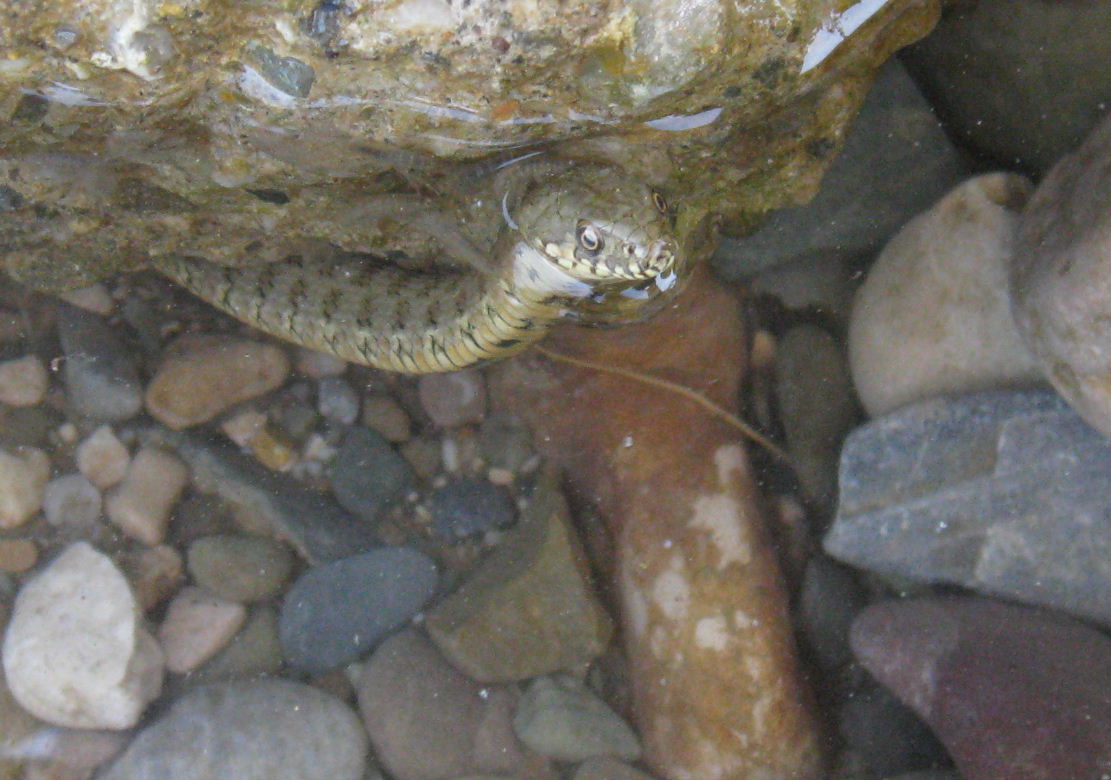 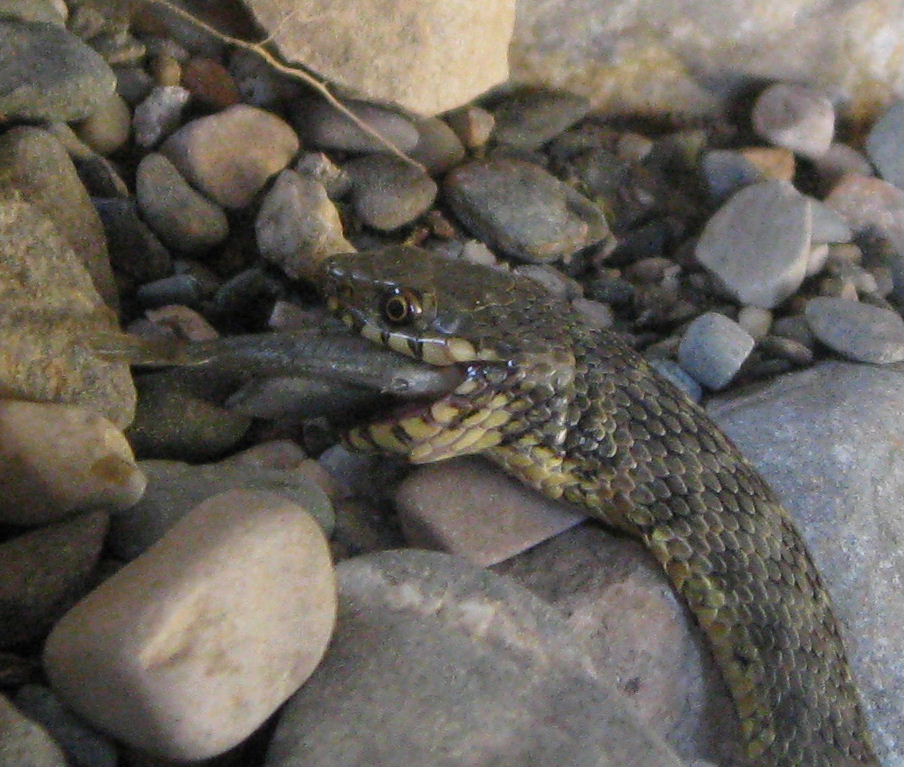 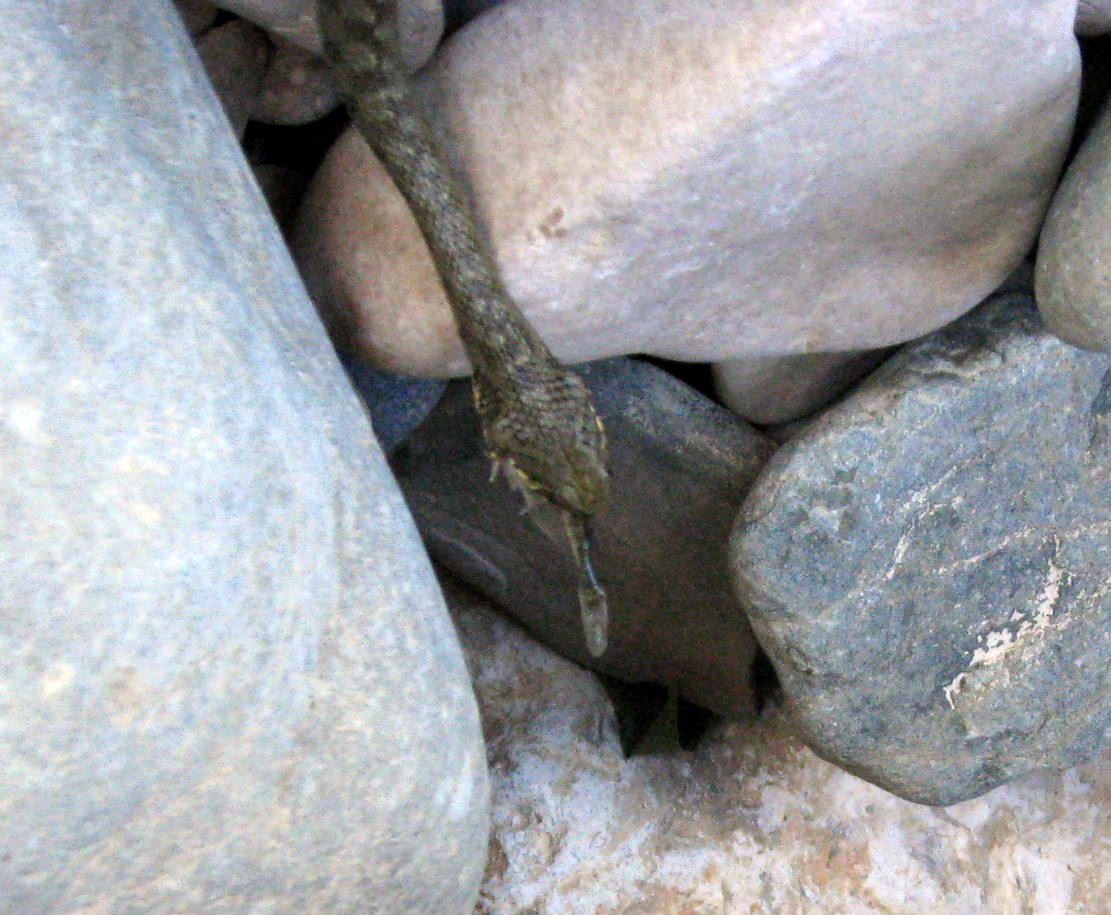 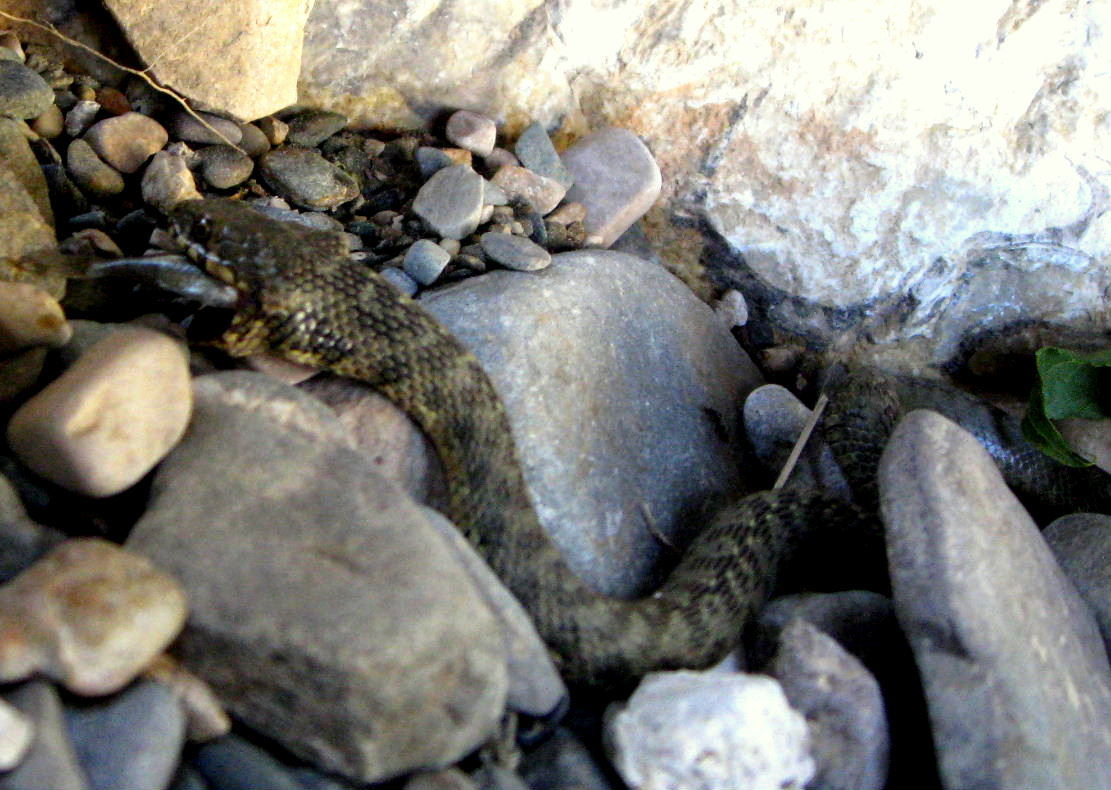 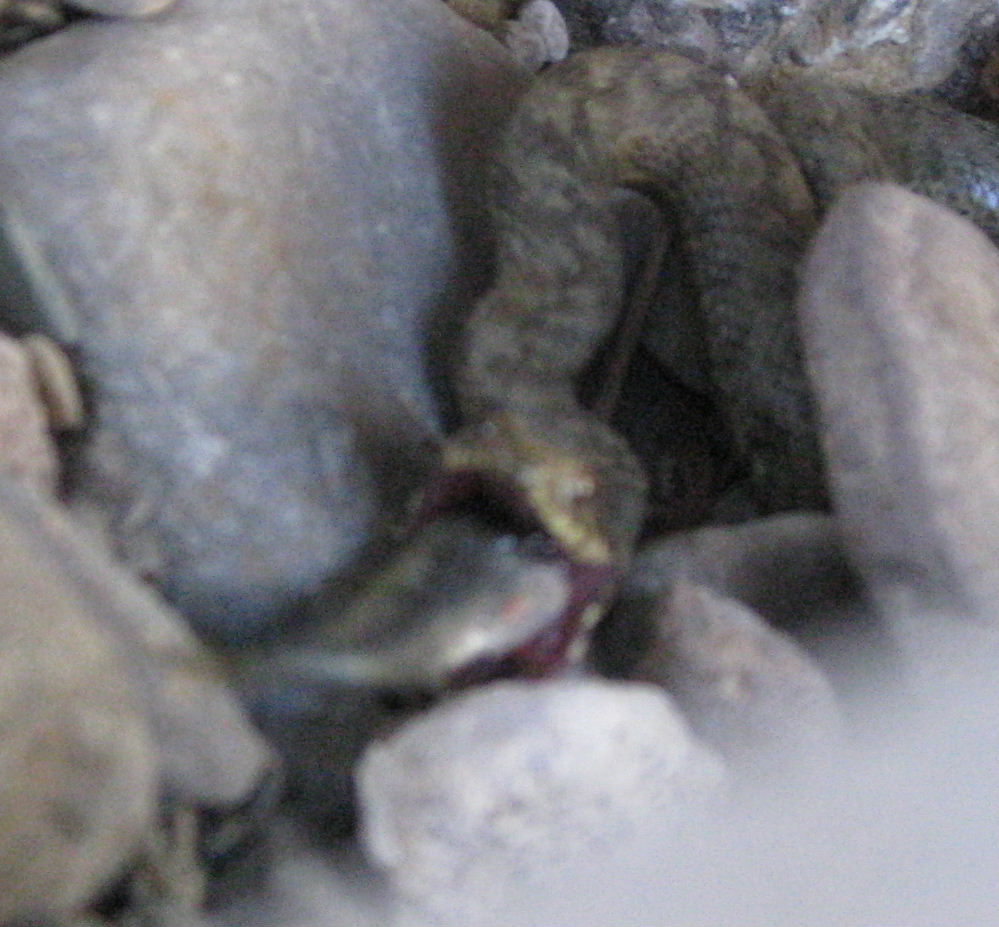 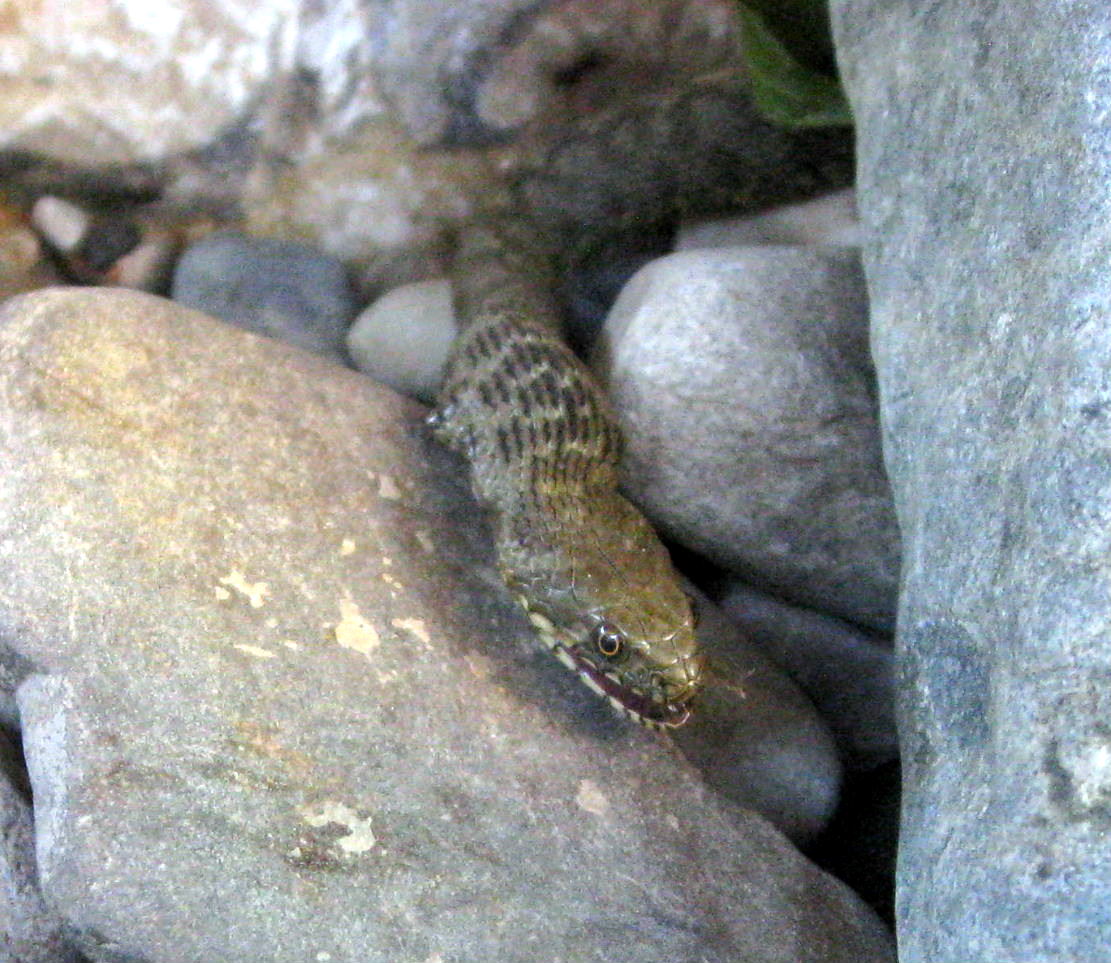 With just the tail sticking out of his mouth, and a swollen neck - he's all but managed to get it down

Now, while the snake wasn’t all that rattled by our presence and talking, there was a moment when I got a little jittery.

As I straddled a rock, taking the video, with my feet very close to where the snake was under the ledge, Nic calmly informs me that there are now TWO snakes - one near my left foot. I’m not really nervous of these snakes as they’re [supposedly] not poisonous, at least not like those we have in Australia, but it did give me a bit of a start. Warning – a little blasphemy - though those who know me know that it could have been a whole lot worse…


And below are a few photos of the new clean river bed – all the weeds and gravel of previous years’ motocross well and truly washed away, and hundreds (thousands?) of tonnes of smooth river stones deposited here.

It’s looking pristine and gorgeous – and we’re hoping that there will be no motocross this year. I think it would be a crying shame to cover the washed river stones with brown gravel that will change the river from this: 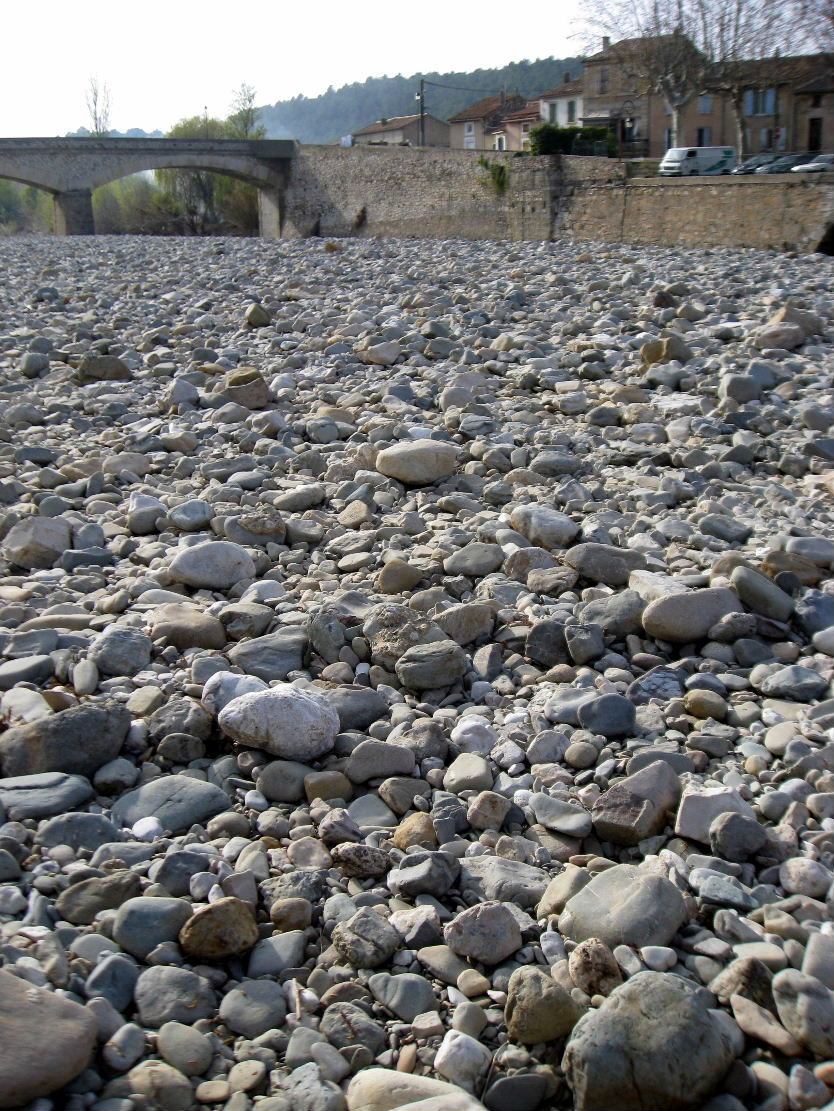 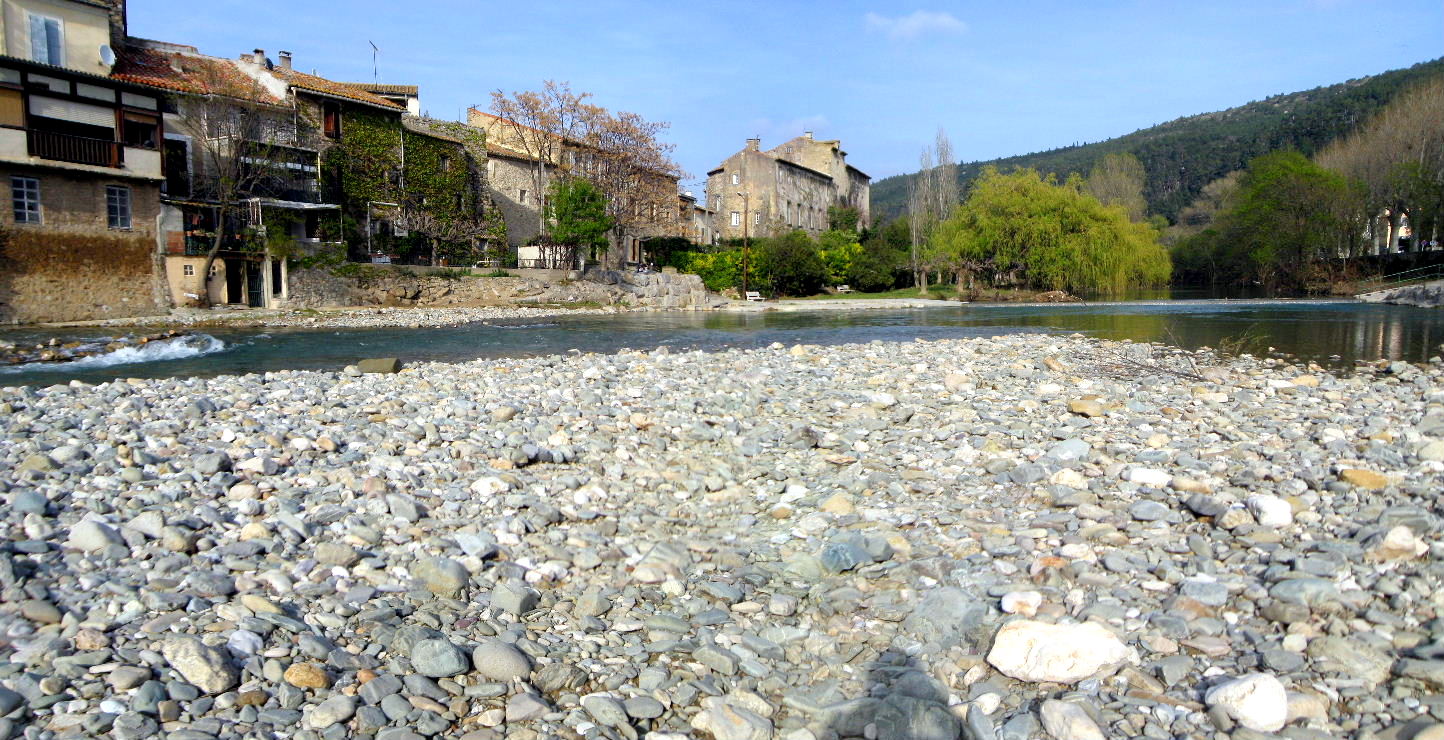 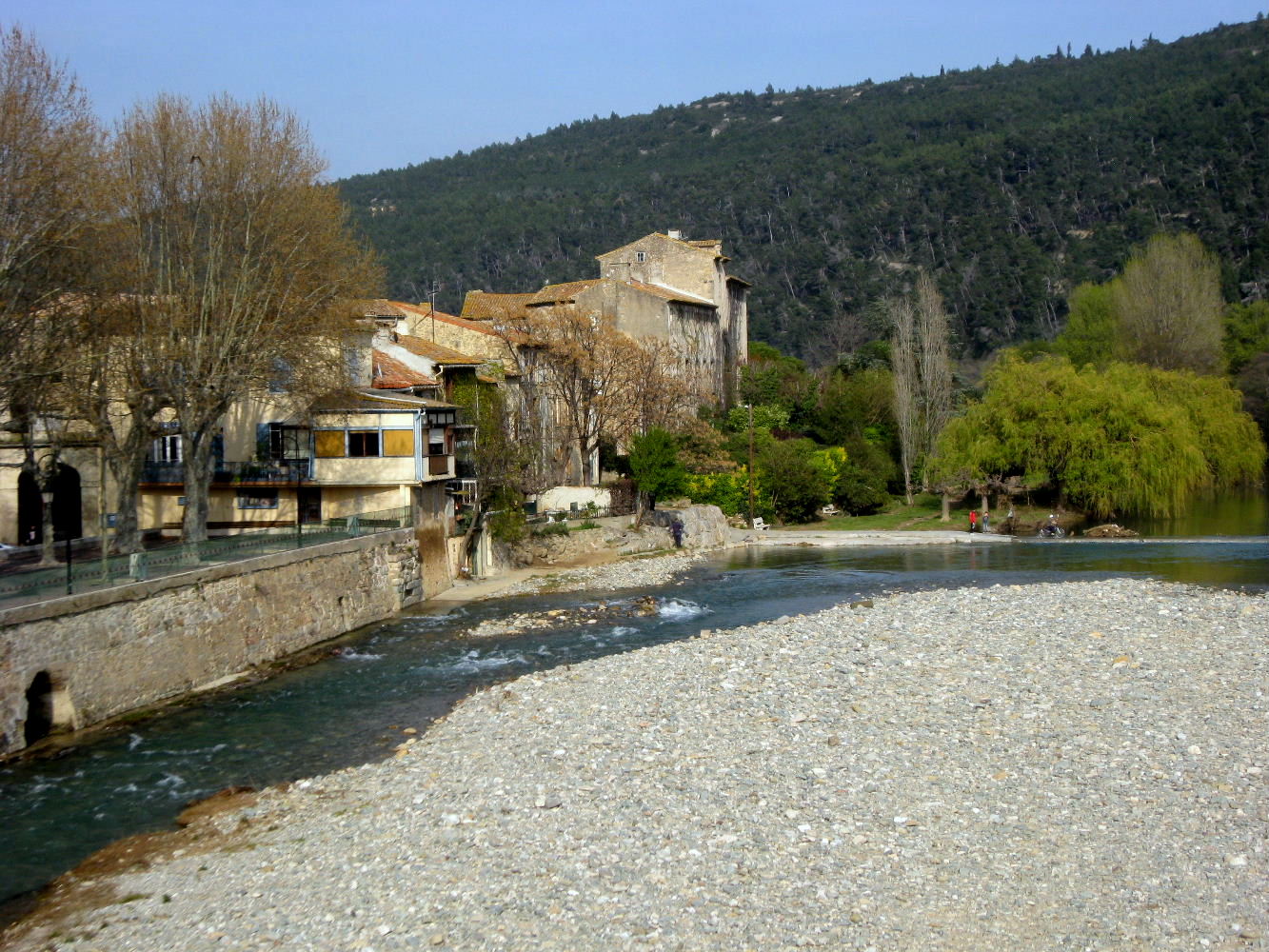 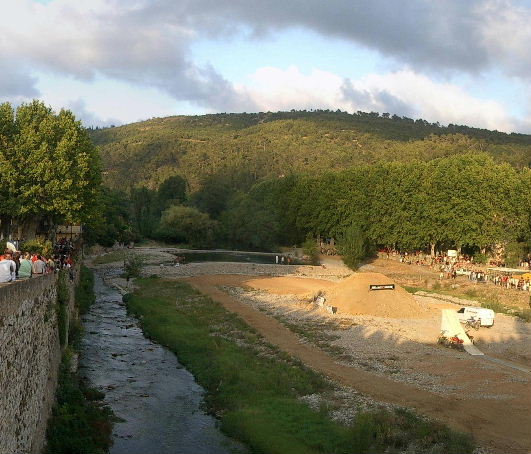 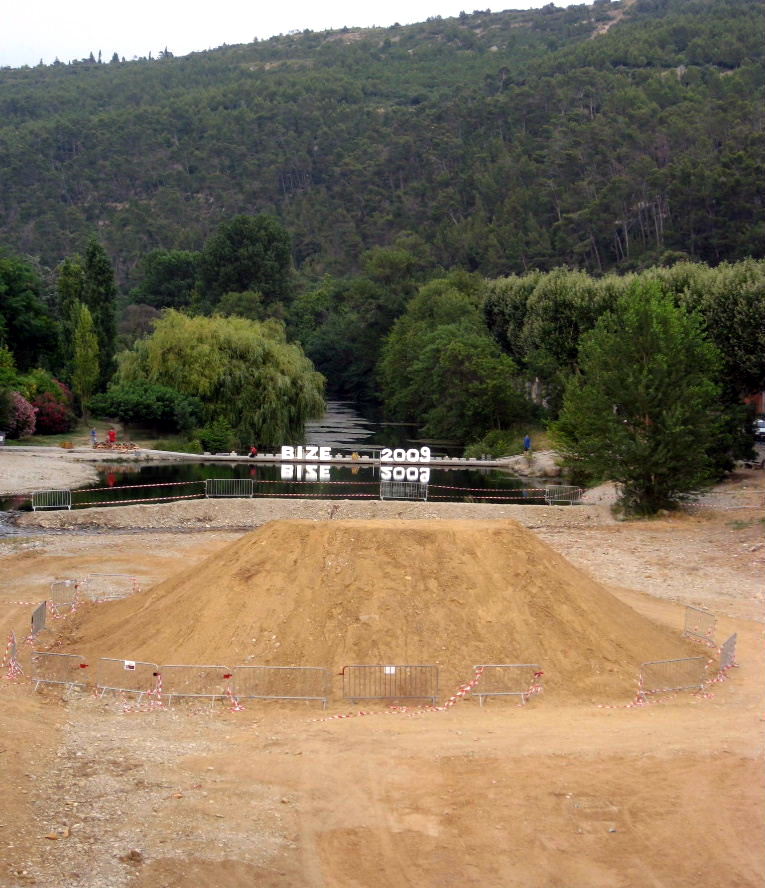 Given that the river rarely flows enough to clean it out like this - and even more rarely has floods like we’ve just experienced - we could be stuck with the “gravel-look” for many years to come. I’m trying to find out if any moves/suggestions have been made to have the motocross at another venue this year.

Back to the flood:
I notice on the Maire’s website there is an article on the 16th March floods:

Floods
"Out of the blue... A flood level higher than that of 1999. At Bize-Minervois, the night of Tuesday 15th to Wednesday 16th March was terrible. No one lost their life but 47 homes and 4 business premises were swamped with mud. Not even the dental surgery escaped the rising waters. Below the village, on the Promenade, on the bank of the Cesse, muck and faces marked by shared suffering.

In the morning, at around 4.00am, yesterday, the river was roused from its slumbers and burst its banks.

For the owner of the cafe, Michel Gleizes, it was a catastrophe. His doors, poorly protected, gave way under the force of the water. In the other houses, with well sealed doors, the mud came in through the drains. "On average we had a meter of water in people's homes" noted Mayor Alain Fabre.

This time, unlike 1999, the residents of Bize were prepared for the worst. The Commune's protection plan was rolled out in time. "We have been watching events since Saturday. We are members of the "protect" network, so we knew what our village was exposed to. As a precautionary measure, we went ahead with evacuations and asked residents to protect their houses as much as possible."

At Bize, the Mayor and his constituents are aware that a disaster has been avoided. "There is muck in several streets and mud in the houses but no lives were lost. It will take us three or four weeks to clean it all up but at least we can breathe a sigh of relief" emphasises Alain Fabre. "Although the Cesse reached a level of 4.03 meters, a level higher than in 1999, this time there was no tidal wave effect. Luckily, otherwise..."

In recent years in this area significant works have been carried out by the communal water management group. Experience also played its part. As did solidarity. Here neighbours, friends, family members came to each other's aid and comfort. The communes of Argeliers and Sallelès, as well as Greater Narbonne have given Bize logistical support.

"And let's not forget the extremely effective action of our firemen" concluded Alain Fabre.