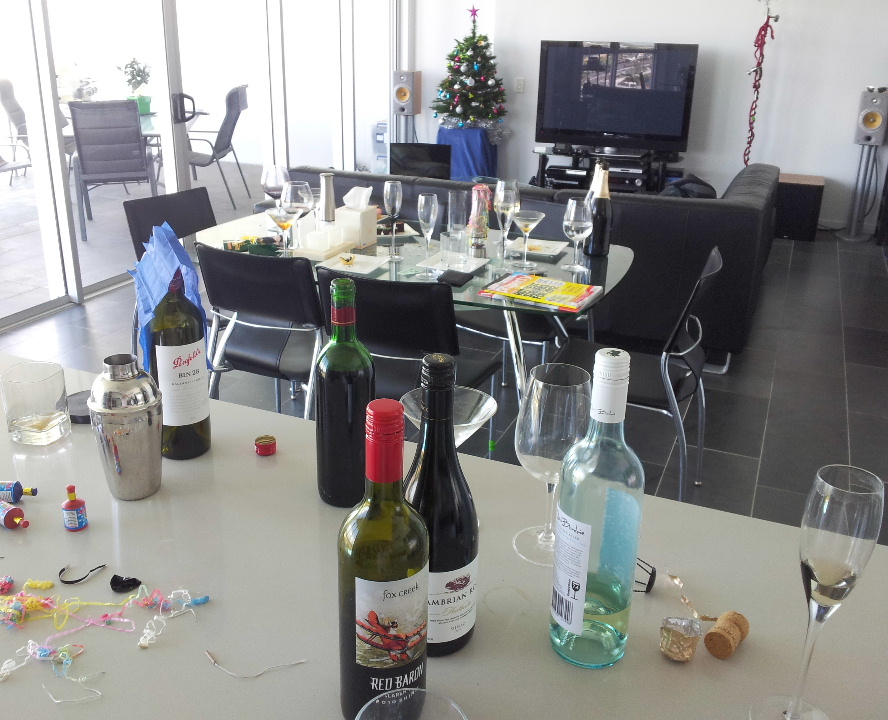 And the clue that it probably wasn’t in France is all those screw-tops on the wine bottles…….

I’ve not long been back in Bize after spending three weeks in Australia. I first went to Mackay, Queensland where Paul’s job has taken him, and then via Perth on my way home. A train trip and four flights later, I arrived in Mackay at midday on boxing day (40 hours door-to-door) - and stepped out into a hot summer’s day with high humidity.

For the second time in recent years, I left France on the 24th and spent christmas day airborne, with a few hours on the ground in Singapore. Much cheaper flights and always the chance to stretch out on a few empty seats down the back on the long haul flights.

As far as types of weather goes, this tropical stuff is my least favourite sort! This part of Australia only has two seasons – known as ‘the dry’ and ‘the wet’. And this was summer - ’the wet’. Hot, sticky, humid,wet.

However, there was lots of air-conditioning to be had and I had a fabulous time staying with Paul and his girlfriend Amanda. Fortunately Paul had time off work so as well as having a gorgeous turkey christmas lunch on the 27th, we managed to get out and see some of the area and also spend an afternoon out on the boat. 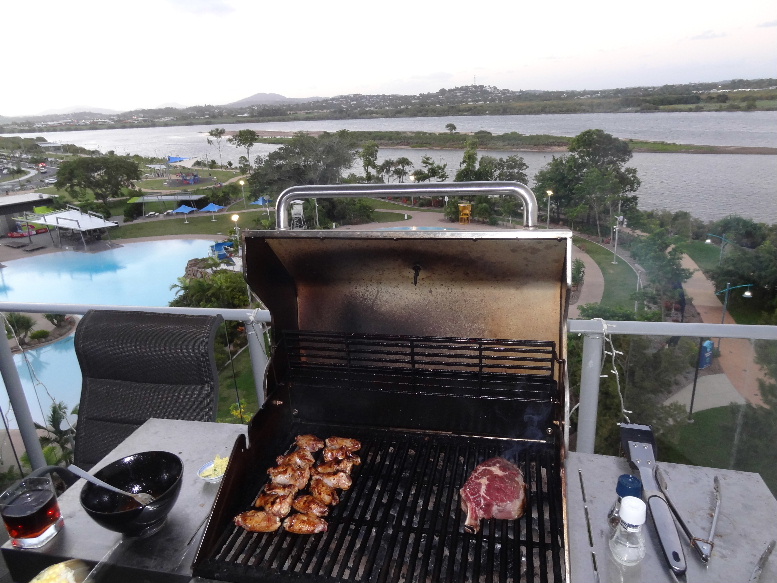 We also had a couple of nice barbies on the balcony – the units where Paul stays are on the edge of the Pioneer River, overlooking Mackay’s public swimming pools.

The difference between the high and low tide levels in these parts is rather large, a rise and fall of about 6 metres. At low tide, all the mud flats are exposed, and at high tide it’s lapping at the banks. 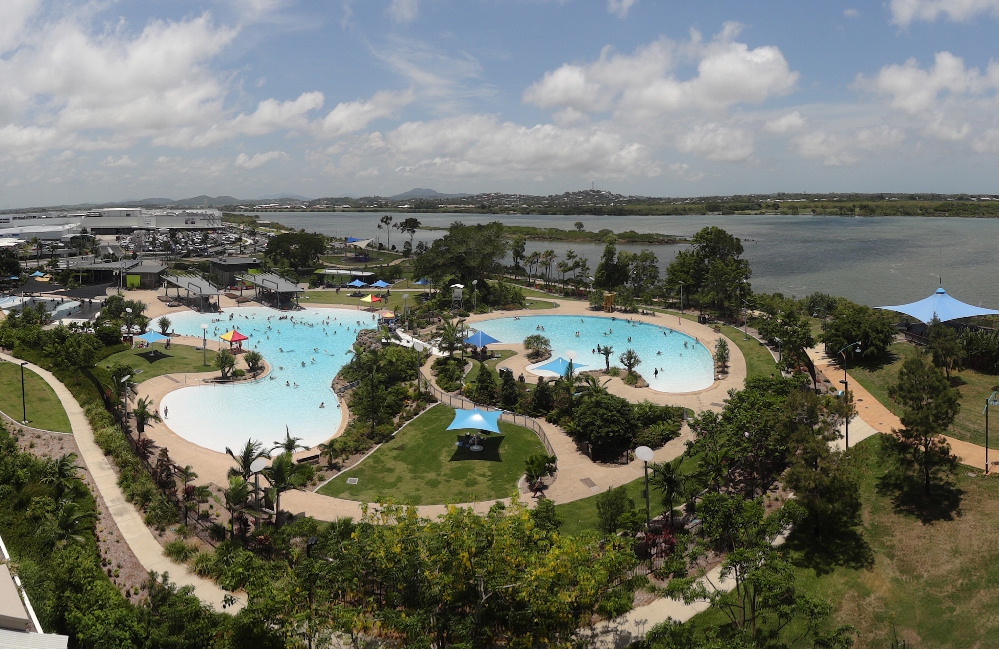 In the boat, we headed south of Mackay ….

We tried our hand at fishing. No luck. Though we did see large schools of bait fish flaring, lots of flying fish skimming over the water (that’s a first for me…), one turtle, and then some dolphins that joined us for a while.

So despite not catching a thing, it was a good afternoon. It did get rather choppy on the long way back, and while I don’t get seasick and have grown up with boats and fishing, I didn’t really enjoy the thumping up and down on the swells as the weather picked up….!

A nice surprise during my stay was that a night’s accommodation had been booked in a cabin at the Broken River Mountain Resort in the Eungella National Park rainforest, about an hour due west of Mackay.

The highlight of this excursion was seeing my first ever platypus, and in the wild! The river was quite muddy from recent heavy rains, but he was easy to see as he came up regularly before diving back to the bottom to search for food. Sadly it was about 25 metres away and this fuzzy shot was the best my camera could manage.

But back at the cabins, I managed to get really close to a kookaburra, and also some good shots of a couple of the bush turkeys that come in from the forest. They seem to have no fear. In fact, you’re warned not to leave the cabin doors open as they will come inside looking for food. I wonder what they taste like ….

We had dinner that night in the restaurant which is part of the Broken River complex. Outside, right next to the verandah, a feeding platform has been built where the restaurant staff feed the wild possums each night.

They get a full plate of chopped fruit that looks good enough to be served up in the restaurant! Possum heaven.

While we were there, a mother and a baby came to eat – but not wanting to use a flash and scare them, again the photos aren’t much cop. Cute as buttons, and I could have watched them all night….

A lunch stop at the Eungella Chalet Hotel – views looking down the Pioneer Valley. 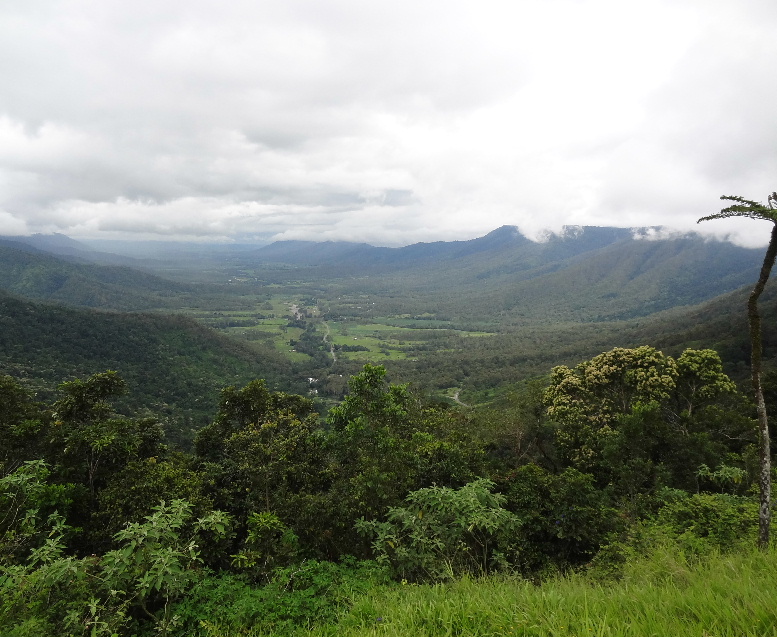 This was a break to just catch up and not necessarily get out and play ‘tourist’ every day, and it was a really good relaxing time.

But there was one more little treat in store – a day out on a boat around the Whitsunday Islands. We booked the trip and drove up to Airlie Beach early on my second last day. It was a full day – firstly the morning spent on Daydream Island, including a lunch ….


. . . with a few unexpected guests wandering into the restaurant …..

And then in the afternoon, a cruise around the islands and an excursion onto Whitehaven Beach. This is the beach that features in a lot of advertising campaigns for the islands – kilometres of pure white sand, so fine that it squeaks when you walk on the dry bits.

And it is very beautiful – but at the risk of bringing our own West Australian beaches into a comparison – I have to say that Cheyne Beach where we grew up is right up there with the white squeaky sand!

OK so I guess I did bring the WA beaches into it, so I’ll continue….. we can swim in our water all year round!  Here there are stingers for 7 months of the year and unless you cover up, it’s not a good idea to go in the water…. (I’ll concede however there’s a bit of a temperature difference between Queensland’s waters and those of Albany’s Southern Ocean currents from the Antarctic!).

The trip out to the islands was in a large boat – very smooth travelling on the way out. Coming back there were a few rough patches rounding some islands that we were warned about. Amanda and Paul sat outside for the rough bits and got a little wet and more than a little wind-blown…. 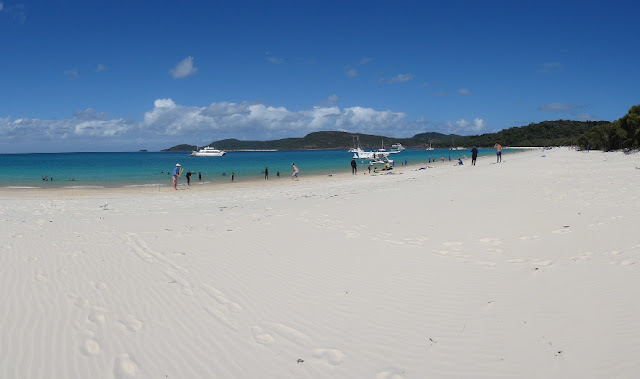 I spent the last week or so in Perth before heading back here to France. I spread myself around a bit so as not to outstay my welcome (!) in any one place. Firstly with my friend Sylvia who is currently on long service leave from her job, then with old mates Marshall and Cameron (who will be my next visitors here in Bize later in a couple of months), and then with Di and Pete – who visited last year.

On my last night, Di and Pete took me out to dinner to the restaurant Incontro on the South Perth foreshore. Fabulous views of the Perth skyline looking across the Swan River. And the food was great too!

The return trip to France was uneventful but extra long, especially given the 5 hour wait at Toulouse for a train to Narbonne.

When I’d initially booked my train tickets (3 months before – thinking it’s about time I used the rail system in France), the connecting time with my incoming flight was good. But in the meantime, major work on the tracks was underway, and all the timetables had changed. Hence the 5 hour wait.

I wish I could say the train trip at the beginning of my journey on Christmas Eve was uneventful. It left Narbonne at the right time, but it wasn’t uneventful.

Nic had driven me to the station and waited in the freezing wind with me on the platform to help me on with my luggage. The problem was that my ticket said I was in carriage No. 12 – but the train that arrived only had 7 carriages.

I got into No. 7 carriage, only to be told my seat was probably up in No. 1 carriage. I was all rugged up in winter gear, the carriages were hot and crowded and I had a shoulder bag, large case and hand luggage. I had to make my way through all 7 carriages, slowly! … looking for a seat. I got to the other end, found a conductor, only to be told my seat didn’t exist. There was only one empty seat – which I grabbed – under instructions that if someone got on at Carcassonne that had that particular seat booked, I’d be standing. We were nearly at Carcassonne (half way) by that stage, and I was a sweating flustered wreck.

I’d also had an unfortunate incident with a women a few carriages back. I thought I’d found my seat number that she was sitting in, and I asked her if that was indeed her seat. Yes, she said. At that moment the train lurched a bit and so did I. I knocked her arm and sent her basket of knitting onto the floor – knitting needles and wool under the seat in front of her.

The old saying 'all over the place like a mad woman's knitting' was playing itself out in front of my eyes! Oh god …. if I wasn’t flustered and hot before, I certainly was then …. A few ‘desolees’ and I left that carriage….

So I think next time I’ll definitely be taking my car and leaving it at Toulouse Airport long term parking. Less nerve-wracking, and when I added up train fares, taxi to airport etc etc, probably cheaper! Live and learn …..
at January 28, 2012