In for a penny in for a pound

Sandra and I decided to have a BBQ for the French walking group as a thank you for making us feel so welcome and for their patience with our struggling French language. When Claude (the president of the club), suggested a maximum of 20, I said ‘fine’. Thought it would be a bit of a squeeze, but figured what the heck – the more the merrier. Well, as it turned out we ended up with 32, including the 7 English-speaking people who sometimes come on the walks. A bit of last minute panic to get extra chairs and seating, but ok in the end.
So yesterday was very busy indeed, setting up the courtyard with tables, chairs, two barbecues and food serving benches, and preparing many salads and desserts. Sandra and I had spent most of Saturday doing a big shop – firstly to Ginestas to fill up our containers with rosé and red, then down to for meat and salad stuff. So actually, it’s been a very busy couple of days. And Patrick, Sandra’s husband, did a fine job in the afternoon playing roadie, stringing up lights (strings of lanterns no less) and power for the music. He also took charge of one of the bbq’s (sausages) and confessed later that it was the first thing he had cooked – EVER! I figured he wasn’t an old hand at it when a few sausages went astray into the fire and he was prepared to write them off - I mentioned that it was OK to do a salvage job and keep on cooking them! Not a problem ….
But an interesting observation on the difference between French bbq’s and what I’m used to. Most people arrived en mass and on time. But Claude and Illyette were running a little late, and they were bringing the aperitif – again, a giant bowl of the blue punch made with champagne and Blue . 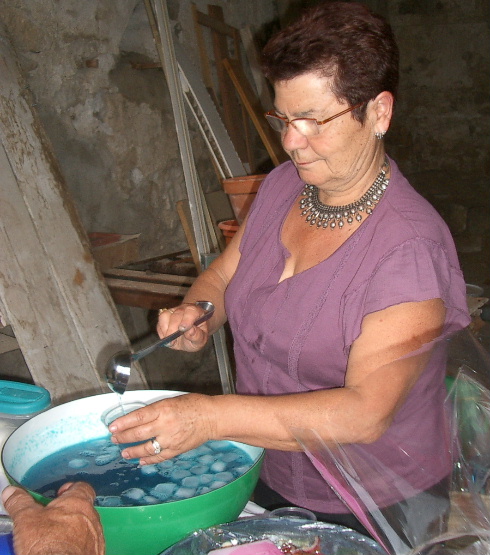 Sandra and I already had a drink in hand (by this stage of the day, we figured we’d earned it), but when offered, no one else wanted one. They wouldn’t drink anything until the aperitifs arrived. And 30 minutes later - after the punch - everyone sat down at the tables. Sandra and I looked at each other - and figured it was time to get cooking! So, I figure that the French idea of a bbq is a much more structured affair than I’m used to – it did make me laugh. It also made us get a move on and get the food out! I was an absolute lather by the time everything was served, but all in all a good evening. Music was good, songs were sung loudly and even a bit of dancing at the end. And the storms that were forecast (!) held off and we got just a little bit of rain at by which time all the guests had departed. Patrick, Sandra and I sat under cover, drew breath, drank fine wine and did a postmortem of the evening. Conclusion – a fine time was had by all - a resounding success.
I was so busy during the evening, that I didn’t get a group picture, just one before hand - before the addition of extra seating! 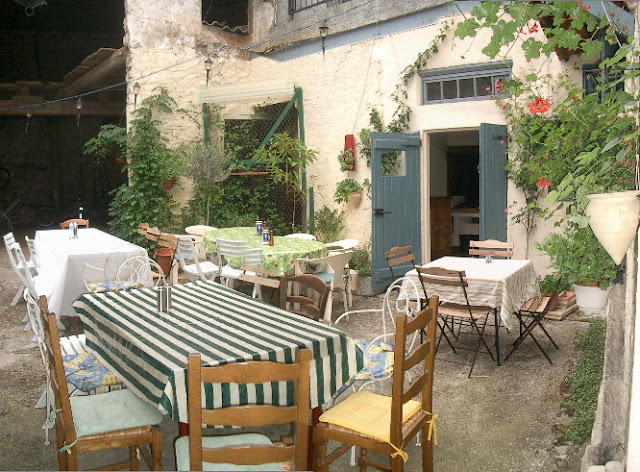 The week before, Bonnie and Terry (who live in Agel and who come on the walks) told us about an event being held at the chateau in their village. 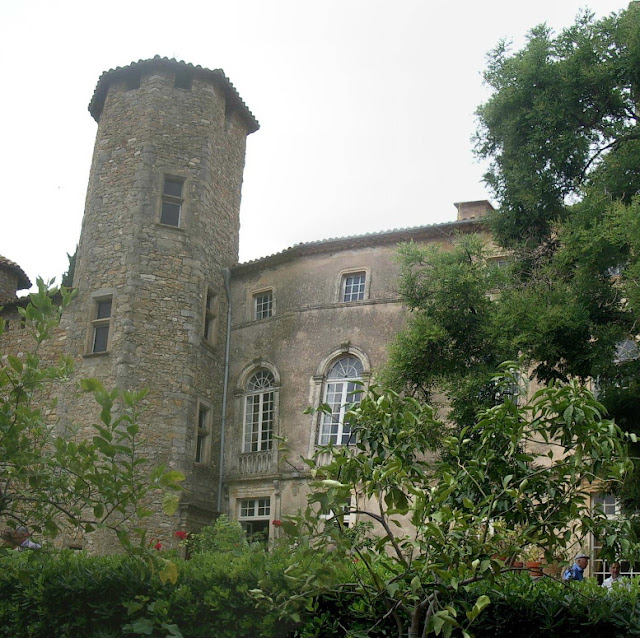 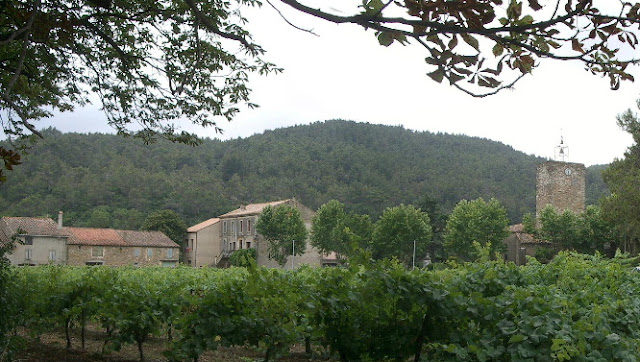 It was to commemorate the 100 year anniversary of the revolt of the vignerons – led by a winegrower by the name of Marcelin Albert who was from the nearby and is now somewhat of a local hero.
There was a luncheon on the day – put on by the village boules team - and the avenue leading up to the chateau was the laid with one long trestle table. A pleasant afternoon indeed. 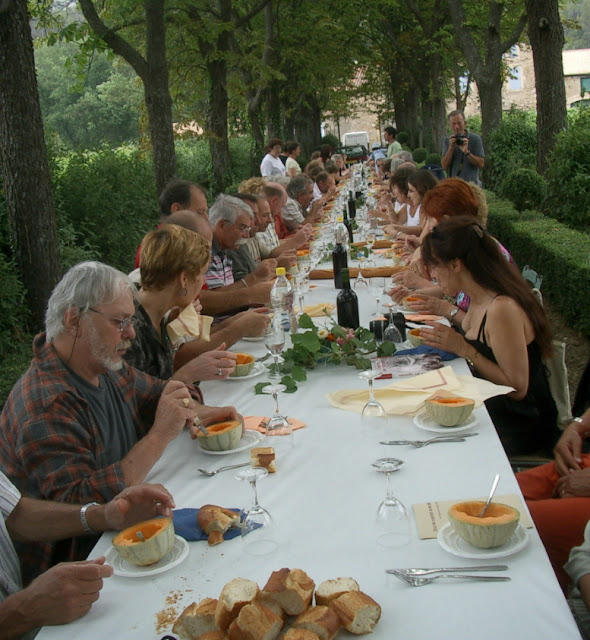 The starter was half a melon, but of course not just on its own. So much better with a good measure of ! 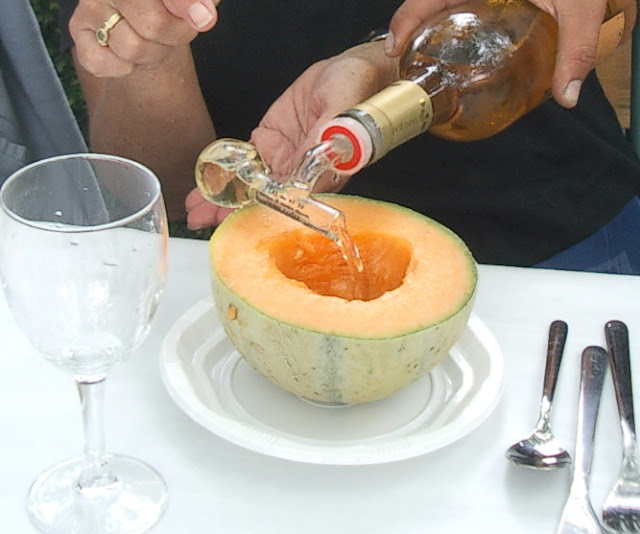 The swimming pool down at the River Cesse has been worked on and is now up and running properly, with a ladder installed on the little foot bridge and a life-guard on duty for the next couple of months between 2.00 and 7.00pm! A small island of gravel has been formed in the middle, and the overflow outlet made smaller, so in fact that water is a bit higher now than is shown in the photo. 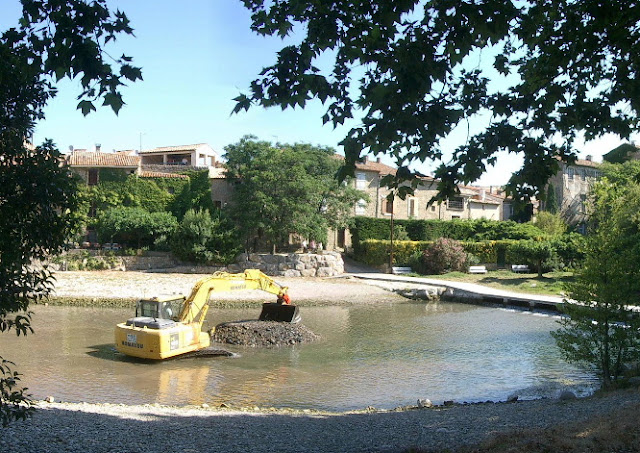