Well, the Olive Festival certainly was a grand affair – the village was bursting at the seams. I heard from someone that it was the busiest yet, with over 15,000 visitors. That’s quite something for a village with a population of under 900. There was even a security person trying to sort out the bottleneck of traffic over the bridge. Hundreds of stalls lined several of the streets, the promenade and the church square.
The festival is held in conjunction with L'Oulibo Olive Co-operative, 2 kilometres from Bize, that sells some beautiful olives and produces lovely oils. Well worth a visit – you can taste all the olives, tapenades and also the different oils.
The history of olives in this area is interesting – in the 50s olives were produced on a large scale but a very severe winter killed most of the trees. They were mostly replaced by grapes but now seem to be coming into their own again. The specialty olive of the area is the Lucque, quite long and curved a bit like a crescent – more expensive than the other sorts but really delicious.
At , the aioli competition kicked off. I was a bit slow off the mark getting to the venue, so couldn’t get close enough to see the competitors grinding madly in their mortar and pestles. 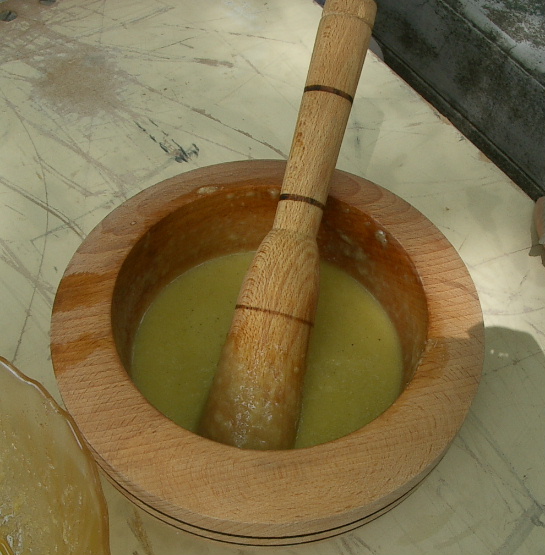 But I did get to see the judges taking their adjudicating responsibilities very seriously. Well, with gusto (and wine) anyway. 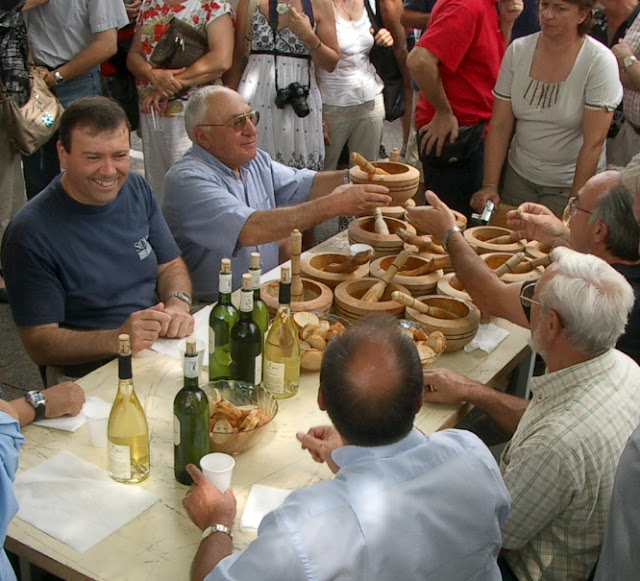 I had visitors for the day and overnight – Mo and Robin and their three kids (from , camping for a couple of weeks down near ). It was a beaut day for them to visit, with so much going on. There were pony rides for the kids. But the catch was that you had to lead the ponies around the village yourself! I got out of that one – Robin took two, Mo took one, and I took the photos. 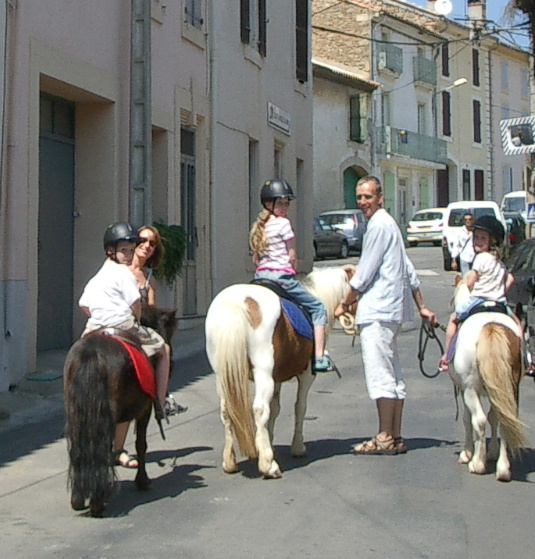 Many stalls of food – not a burger or hotdog in sight. But moules and escargots by the bucket load. 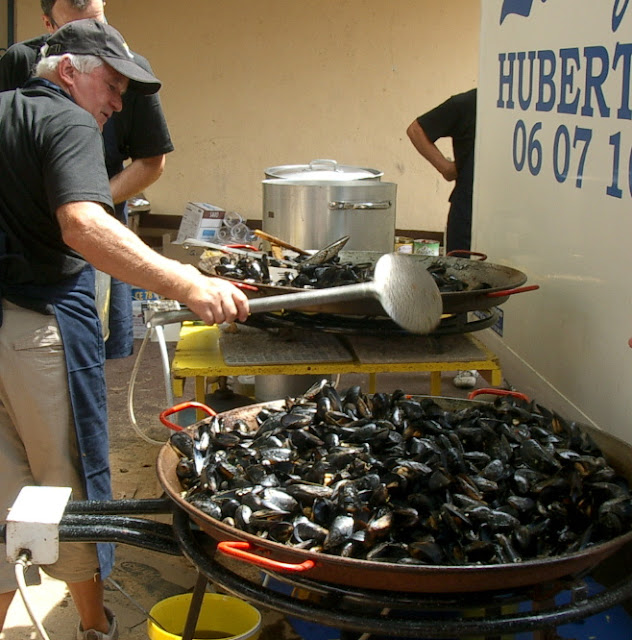 Even though the centre of the village is small, there’s so much hidden away – there are always surprises. I’ve never seen these doors open before – there is a wine cave off the courtyard behind these two beautiful archways. 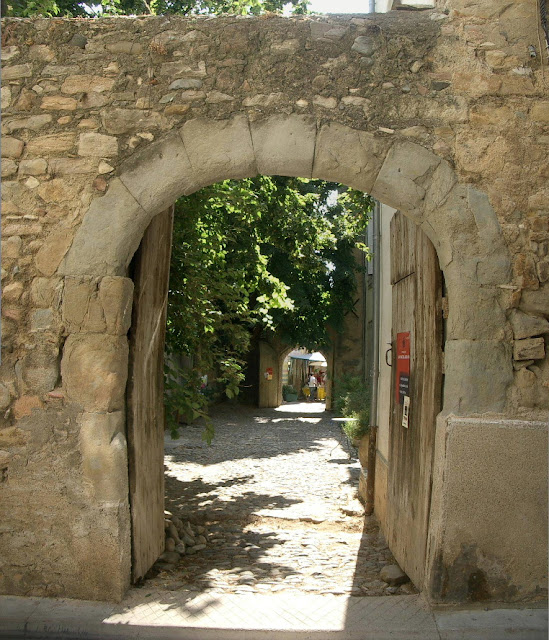 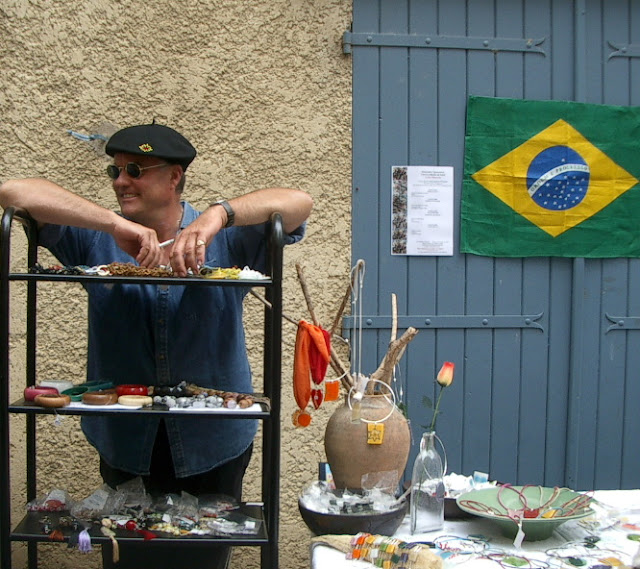 The weather was not too hot, but warm enough that there was a good crowd down at the pool.

And a couple of pictures around the village that I took early in the morning before the crowds arrived - it really was shoulder-to-shoulder most of the day. 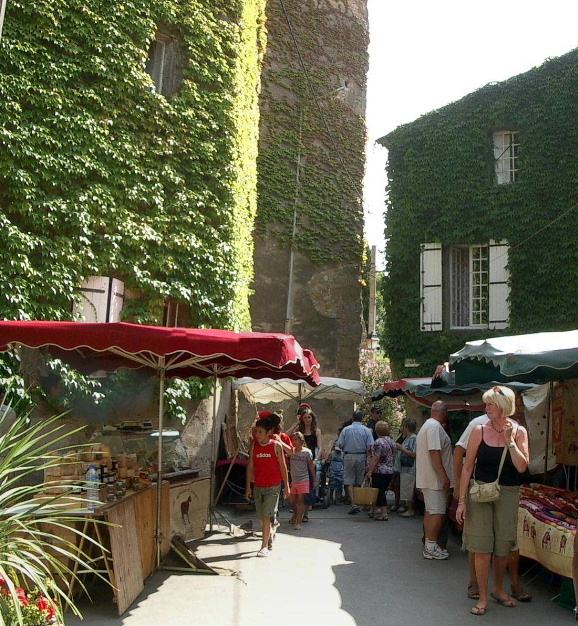 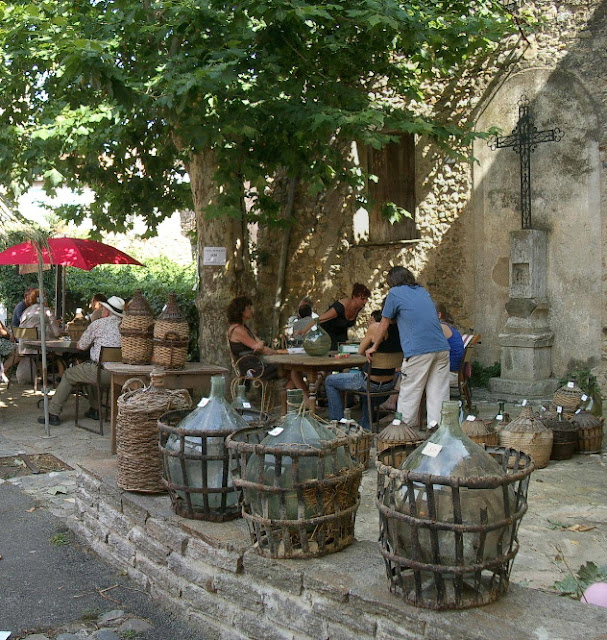 There were soooooo many stalls – and what did I come away with? A bag of fried onion bits for sprinkling on salads, and ….. this ……. 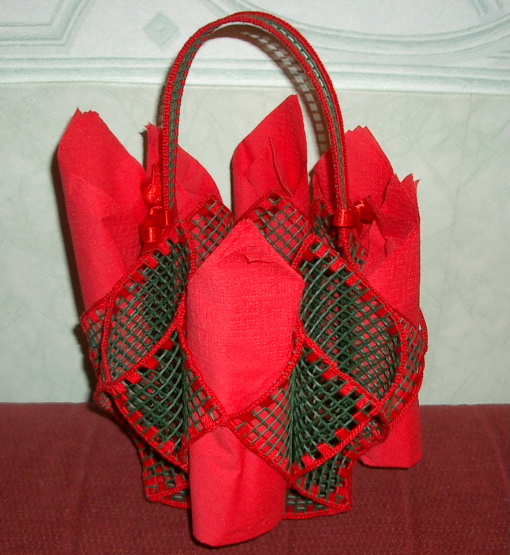 The Troisième âge folk had a stall outside the Club rooms, selling handicrafts. I bought a few numbers in a tombola, and then Claude and Illyette cornered me and reminded me that ALL the funds raised from the sale of the goods would go to the club. They also jotted my name down on a list to go to Corsica next year for a trip with the club. Sounded good to me!

And so, for 10 euros and much to Claude’s delight, I am now the proud owner of a green plastic / red crocheted – wait for it – SERVIETTE HOLDER!

And the reason it’s looking SO nice here is that Mo turned her hand to folding the serviettes. She chose midwifery as a career, but I suspect she missed her calling...
And the day finished off with fireworks, again down in the riverbed and music on the promenade.