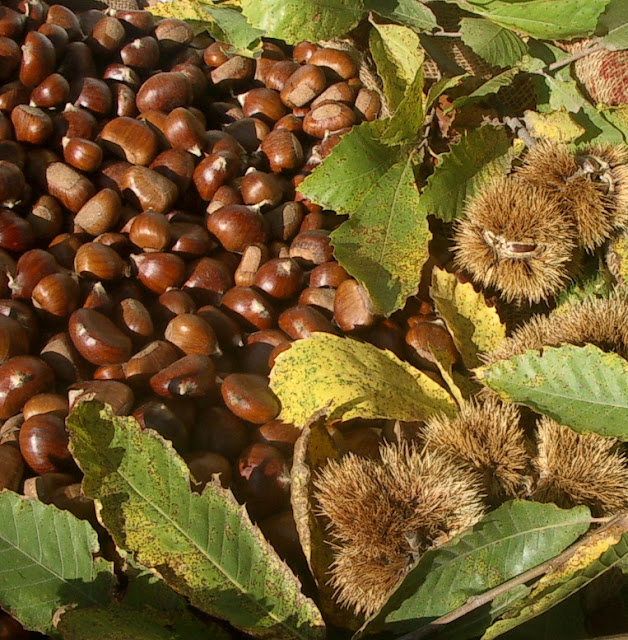 It’s that time of year – chestnuts are everywhere. They grow best in this region up around St. Pons-de-Thomières and St Chinian. And of course there’s a festival to celebrate – the Fete de Chaitaigne. And that’s where I went with Sandra and Patrick last weekend. Weather turned out to be ideal, and we got there before the crowds on the Saturday. 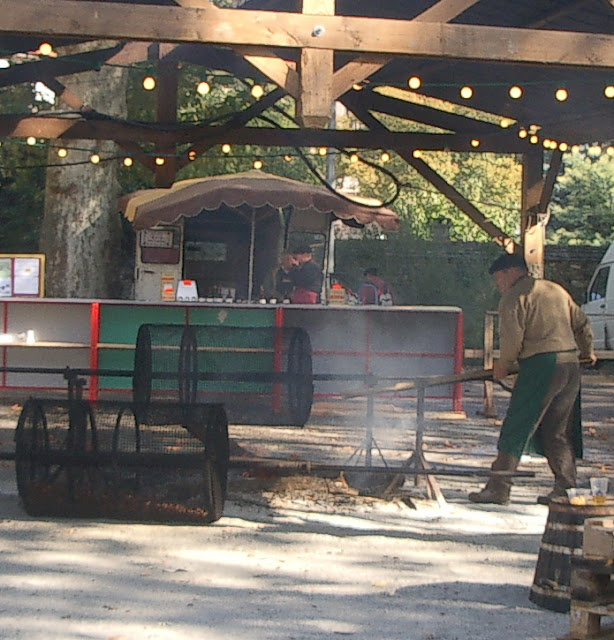 Being a festival-come-market, there were the usual delicacies: 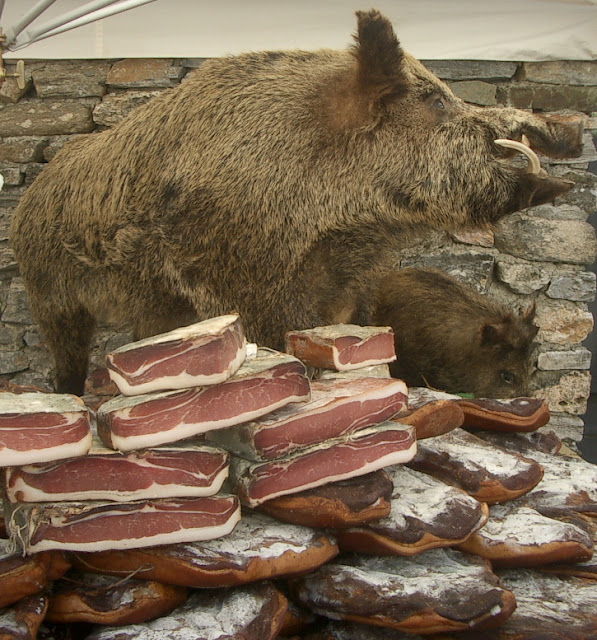 And fresh apple juice, squeezed – or I should say ‘pressed’ - the old-fashioned way. It was divine – tasted just like the apples I remember eating as a kid from my rellies’ (Aunty Joan/Uncle Ted) apple tree in Albany. 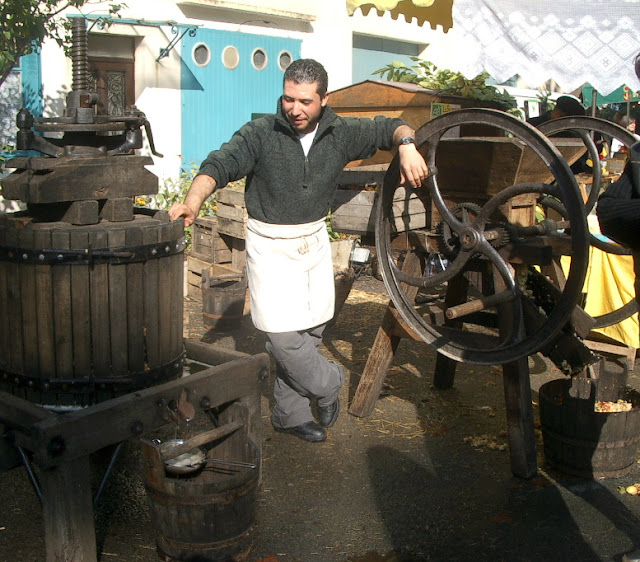 Continuing with the ‘everything chestnuts’ topic – our last picnic for the year with the walking group was yesterday up in the hills near St Chinian. From now on, it will be walks only in the afternoon, until the weather warms up again – probably around April.
After the walk, we ate lunch in another hunters’ hut. Later, the fire was set outside and the roasting of the chestnuts began. It’s obviously a ‘man thing’ and taken very seriously. I was actually allowed to turn the handle on the roaster for a while, but only lasted a few seconds having been told I was turning it too quickly!
They were very well prepared – bundles of tied vine cuttings, old vine roots and a trailer-load of olive prunings were all on hand to fuel the fire. 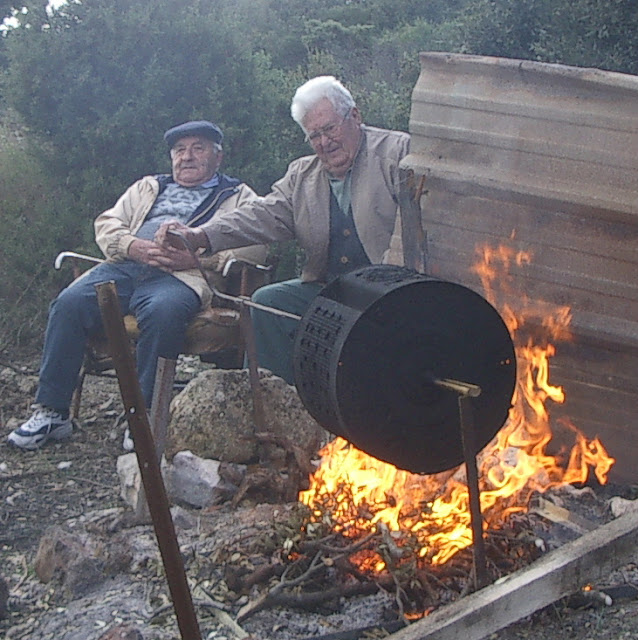 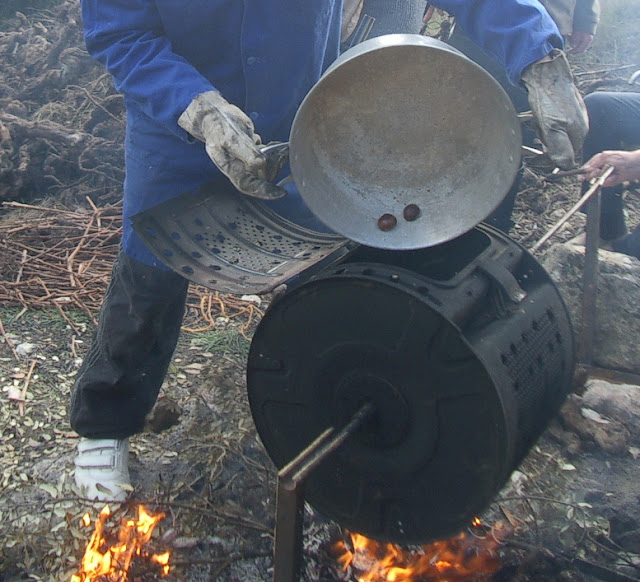 And not only were the chestnuts celebrated, but the 2007 new wine! And a nice little drop it was too. Claude had brought along bulk containers of it – a little ‘piquant’ he thought but said to give it time and it should be good.

Illyette thought it would be a good idea if Sandra and I donned traditional clothing (she just happened to have bags of it in the car) and joined her and a few others and played the part of serving wenches. So we did.

Yikes, that extra chin has snuck up on me …. 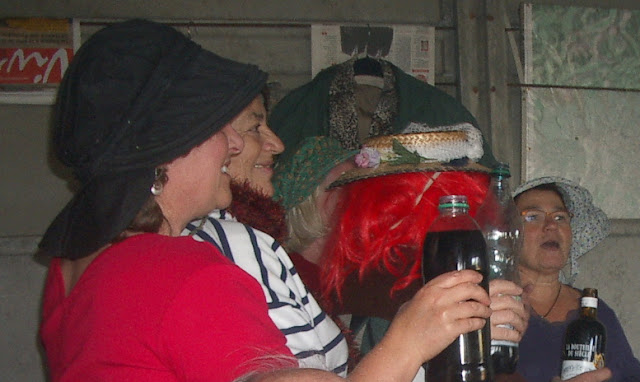 And last week, a group of us in Bize made it into the region’s newspaper – Midi Libre – with an article on the new 2007 wine. A wine tasting was held at Marie's wine shop Les Raisins du Soleil - the village's little wine shop. 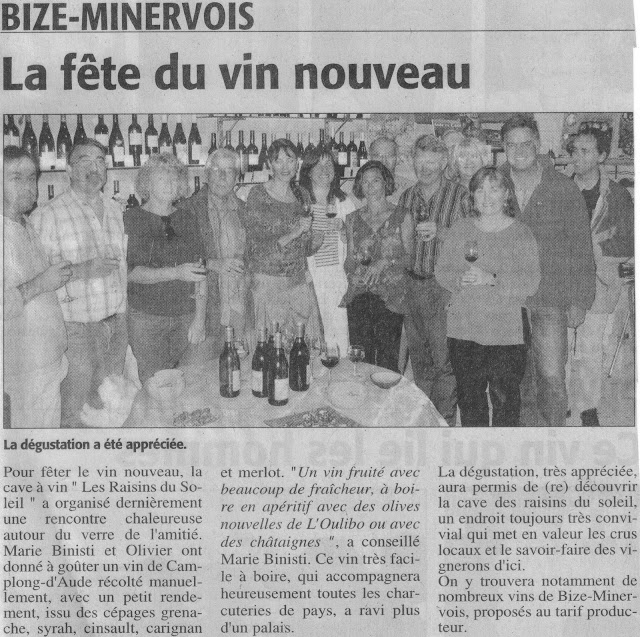